“A huge building in a very tight space, over one of the busiest travel hubs in Canada. Not an easy site to work on.” - Jury 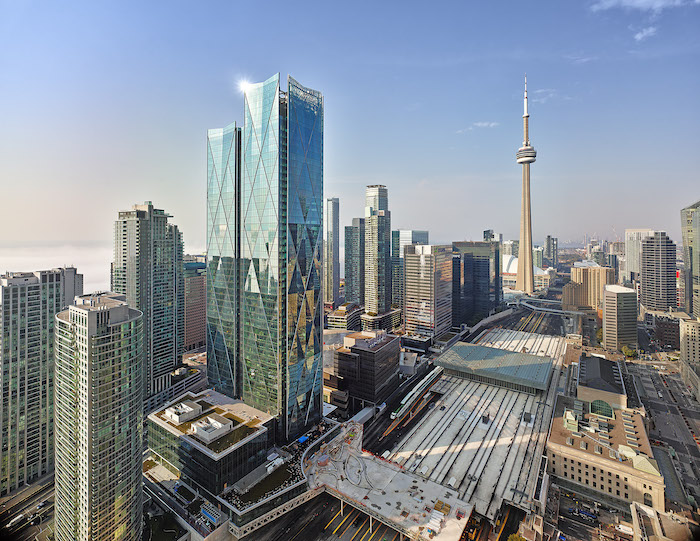 CIBC Square at 81 Bay Street is a commercial office development in downtown Toronto’s financial district, just north of the Gardiner Expressway and adjacent to Union Station, the Path and Scotiabank Arena. With its many connections, it is one of the most complex and advanced towers ever constructed in Canada.

Hines and Ivanhoé Cambridge collaborated on a vision for raising Toronto to a new international standard of office building. Architects at WilkinsonEyre and Adamson Associates developed the master plan for the mixed-use development within a tight urban site. Rising 54 storeys, it provides 1.5 million sf for Class AAA commercial office space, restaurants, retail, a terraced park platform and a new GO bus terminal.

The tower features unique floor plates to support its folded glazed façade, sloped building columns, a reinforced concrete core and a structural steel floor slab system. All floors are identical, except for varying edges to support the unique architectural appearance. Large corner cantilevers in the range of 4.5 m, which meet the architectural form, were checked by RJC for vibration with time-history analysis.

Slender, 24-m tall columns in the main lobby, supporting the whole tower and bracing a 24-m cable wall, were made of 700 x 750-mm solid structural steel square sections. Many of these highly loaded structural steel columns were tilted to avoid the architectural services below. 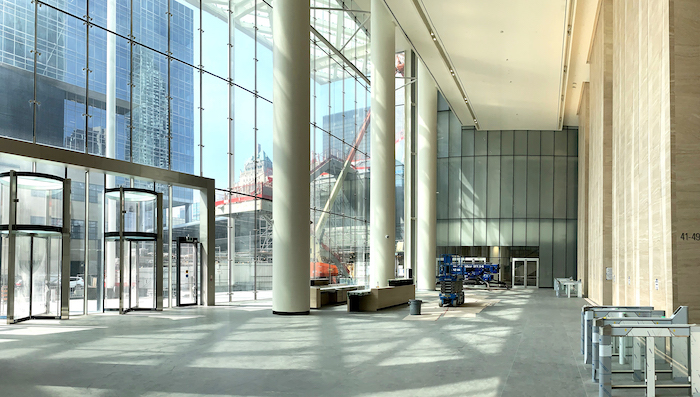 A 900-mm deep post-tensioned slab supports the upper bus level and spans 24 m over the lower bus level. The shallow depth of this slab was critical in accommodating appropriate floor elevations dictated by path access and bus ramp slope criteria.

The 1-acre elevated park connects the development to the north side of the rail land, creating a new public realm and setting a new precedent for future developments over the 16-track rail corridor. Its geometry required long-span steel trusses for strategically located columns for future train tracks. All tracks were opened during construction, which made field operations complex.

Another key element is the 40-m long Bay Street Bridge, with a full-height glass wall on the south side (no structure), spanning Bay Street. The ‘open C channel’ structure required complex analytical modelling to optimize stresses for a cost-effective design that carefully considered accelerations due to walking vibrations.

Excavation and construction of a three-level underground parking garage and the base of the structure came with considerable challenges along the north property line, which required a contiguous caisson wall transitioning into a reinforced concrete crash wall above the rail corridor and supporting the skypark. The hybrid crash wall, integrating shoring and structural systems, was designed to American Railway Engineering and Maintenance-of-Way Association (AREMA) standards to sustain impact forces from train derailment. This design required a permanent rock anchor system to ensure durability over the building’s life cycle.

Project work began more than 10 years ago on CIBC Square at 81 Bay Street, which was designed to meet the multi-criteria environmental assessment scheme of LEED Platinum. Its owners are also pursuing WELL Building Standard certification.

Water fixtures reduce consumption by more than 40%. An enhanced HVAC system minimizes noise while providing even temperature distribution. As per the model National Energy Code for Buildings (NECB), energy costs are reduced by 40% when compared to a typical, comparable new building.

The development was designed not only for resource efficiency, but also with its users’ health, wellness and quality of life in mind, with highly optimized air filtration and ventilation, bicycle storage racks and access to shared green spaces. Further, the tower was designed to deter bird strikes. 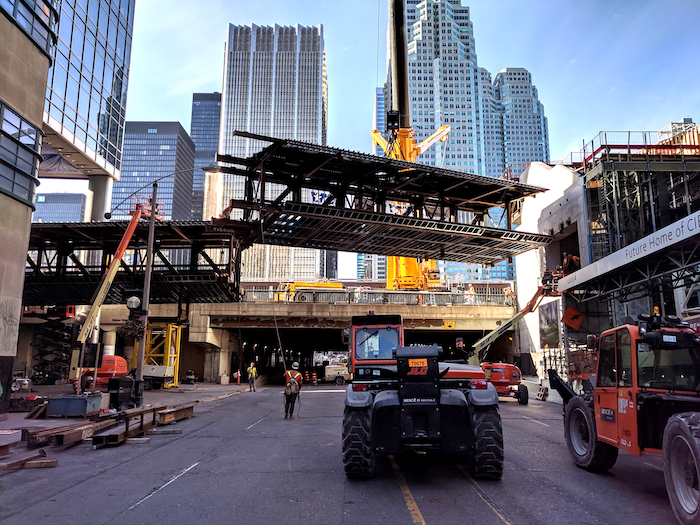 RJC Engineers met and exceeded the client’s goals and expectations in delivering a complicated structure in an efficient and cost-effective manner—and had to prepare a complete set of tender documents for a spec building without a tenant.

During construction, CIBC became a tenant, which led to significant reworking to tailor the building to the bank’s needs. RJC had to prioritize and schedule the redesign work in co-operation with its clients and their subconsultants to prevent on-site stoppage.

Indeed, timely focus on site issues and changes was crucial for overall project success. In another example, due to the need for heavy equipment and the presence of critical underground infrastructure, the Bay Street Bridge could only be craned from the Bay Street Viaduct at rail level. RJC successfully conducted a condition assessment and proved to transit agency Metrolinx that this 100-year-old viaduct could support the loads and deflections could be monitored, all on the busiest sections of track anywhere in Canada.