“A clever use of wood modules for an efficient structural system.” - Jury 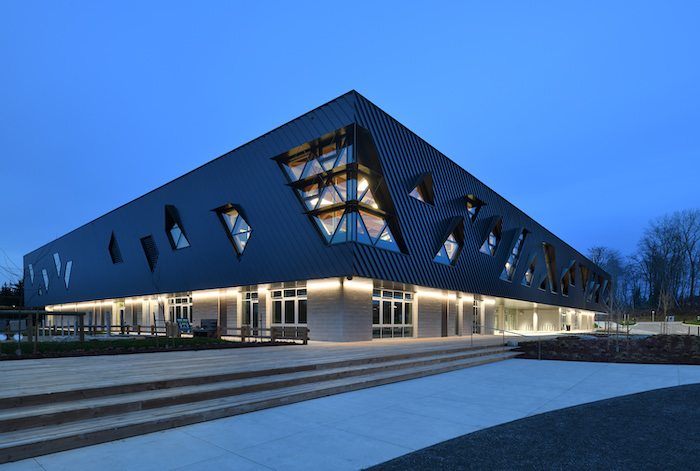 Clayton Community Centre, completed in 2020, reflects the theme of a tree canopy draped over community spaces. The esthetic goal, establishing a ‘lattice-like’ roof structure resembling tree canopies native to the area, was achieved using an assembly of reciprocating pinwheel-shaped glulam modules in a unique two-way timber system. The system is both structurally efficient and architecturally expressive.

The 78,000-sf, two-storey building was conceived as a gathering place and social hub for the fast-growing and culturally diverse community of Clayton Heights in Surrey, B.C., approximately 40 km southeast of Vancouver. Located between the neighbourhood and two secondary schools, the centre combines various city services under one roof, such as a library branch, gymnasium, fitness centre, child care and art spaces.

A new iteration of ancient technology

HCMA Architecture + Design, well-known for recreational facilities, designed the new community centre to allow natural light to filter through to the building’s interior spaces, centred around a dramatic spiral staircase.

Wood is a desirable construction material for many reasons, including sustainability and beauty, but it is challenging to create connections that can transfer bending moments, leading to framing schemes that typically rely on simple span wood members and dropped beam conditions.

The project team had a strong desire to use wood as a primary material for Clayton Community Centre, but the required spans and architectural intent led RJC Engineers—in its role as structural engineer—to develop the concept of a two-way wood system, composed of three-member reciprocating wood modules that are repeated and expanded to create a complete roof system. 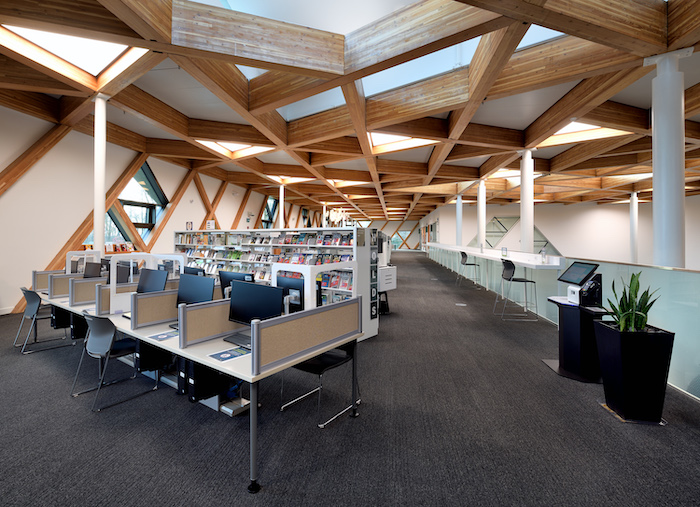 Wood modules were repeated and expanded to create a complete roof system.

Connecting discrete wood members with shear connections in such a way is not new; this technology was implemented in ancient China, using members with limited length to build structures with significant span. This general idea was modified and built upon to arrive at the two-way interlocking system.

The form of the two-way system posed many technical challenges. The architectural vision led to a system where all wood members are of the same width and depth. To improve the system’s efficiency, key members were reinforced for moment and/or shear to minimize the overall system’s typical member size.

The member reinforcing was achieved with a combination of diagonally installed self-tapping wood screws and steel plates. This type of reinforcement for glulam members is not codified in Canada, so reinforced beams were proof-tested at the University of British Columbia (UBC).

The two-way system’s reciprocating nature led the team to investigate system redundancy and measures to carefully prevent progressive collapse. The solution included the introduction of continuous steel ‘integrity plates,’ strapped to the top of the structure and spanning to critical lines of support.

Construction-wise, there were several challenges in implementing the pinwheel system on a large scale. The engineering team worked closely with supplier Western Archrib and erector Seagate Structures to develop feasible and cost-effective methods. The system’s reciprocating nature meant temporary shoring of at least the leading edge of the erected structure was needed.

A platform was created adjacent to the building, where three-member pinwheel modules were prefabricated on the ground, labelled and stacked. A crane then lifted the modules into place. 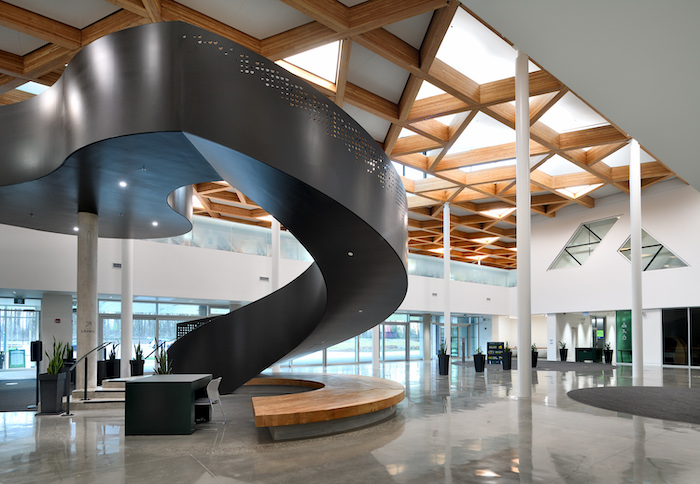 Interior spaces are centred around a dramatic spiral staircase.

Environmental and sustainability targets were a high priority for this project. Targeting Passive House (PH) certification provided a guide early on for the centre’s design and layout, including building massing, materials selection, consideration of solar orientation and shading and attention to key details. At press time, Clayton Community Centre is on track to be the first community centre to be PH certified in North America—and Canada’s largest PH facility to date.

Close collaboration between the project team members was essential in reaching energy efficiency goals. The structure is formed of stacked boxes with an upper-level overhang to help control solar gain within the facility. RJC developed its structural details to accommodate the particular envelope requirements of a PH design, including insulation around foundation elements, thick insulation on the walls and roof and details to minimize thermal bridging. Thermal break elements were used at rooftop mechanical units and anchor connections. Skylights were carefully placed to maximize natural light while minimizing thermal impact.

Sustainability is also highlighted through the choice of wood for both structural and architectural elements. The locally sourced timber emits a low embodied carbon footprint and the prefabricated glulam pinwheels allowed for simple erection with reduced debris on site.