“A great example of what’s possible in terms of bringing existing buildings into the future and improving their energy performance.” - Jury 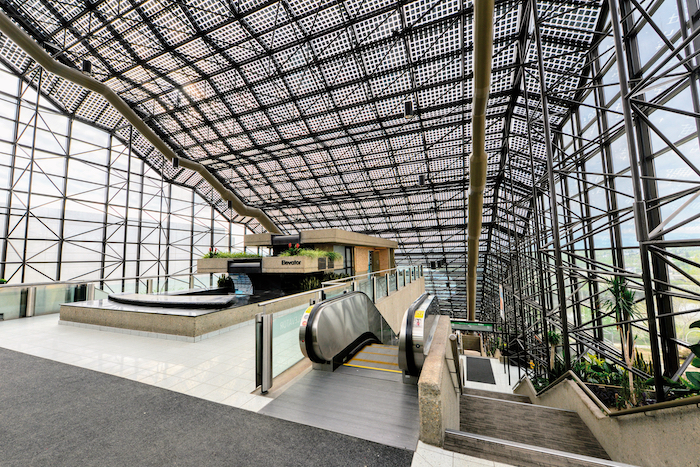 The revitalization of the Edmonton Convention Centre’s (ECC’s) multi-level atrium along the slope of the river valley was an opportunity to do more than just replace its 35-year old glazing. DIALOG added a higher-performance building envelope, modern lighting and electrical systems, structural upgrades and Canada’s largest building-integrated photovoltaic (PV) system. The renovation allows the ECC to showcase its ambitious sustainability goals, while also helping to achieve them.

Harnessing the energy of the sun

The installation of the solar PV system is the most visible and ambitious update. As the 35-year old glazing was leaking and had poor thermal performance, given the atrium’s expansive area and southern exposure, there was an opportunity to integrate solar PV glass. Insulated glazing units (IGUs) were manufactured, with monocrystalline cells sandwiched between the panes, custom-sized to fit within the existing framing system.

The 170-kW solar PV system uses a string inverter topology. Instead of hiding the inverters, they are prominently mounted in plain sight among the atrium’s indoor foliage. This location showcases the components necessary to harness energy from the sun and provides an educational opportunity for visitors.

The selection of the glazing was an intensive, iterative process that included six different options. There were many factors to be considered, including U-value, visual transmittance, shading co-efficient, colour and system weight.

The overall cooling load for the space had to be equal to or lower than the existing load, so as to avoid costly mechanical system upgrades. Another significant factor was retaining enough light quality for the atrium’s plant collection; this required a full daylight illuminance study. The process led to the selection of a double-paned assembly, since triple glazing could not be structurally supported. 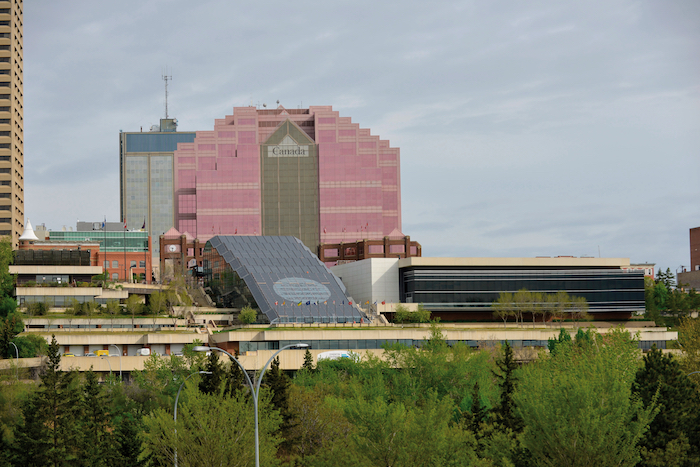 The ECC atrium follows the slope of the river valley. The south-facing roof provides a strong opportunity to harness energy from the sun.

Due to the new glazing’s reduced heat loss, a study of the anticipated snow loading was commissioned. The study considered building massing effects, prevalent wind direction, snow melt through the roof and current climatic data to determine if any reduction in snow loading was permitted below the values prescribed by the codes.

The wireway design for the DC cabling that connects each PV panel into the electrical distribution network was carefully co-ordinated with the glazing structure. Electrical inspectors were consulted early in the design phase to determine the safest way to run the high-voltage cabling through the glazing system and the structure.

As for lighting, antiquated 400-W high-pressure sodium fixtures were replaced with efficient LED downlights. These fixtures are located above escalators and stairs, making maintenance access difficult, so the new lights use remote driver systems, allowing for maintenance from ground level. 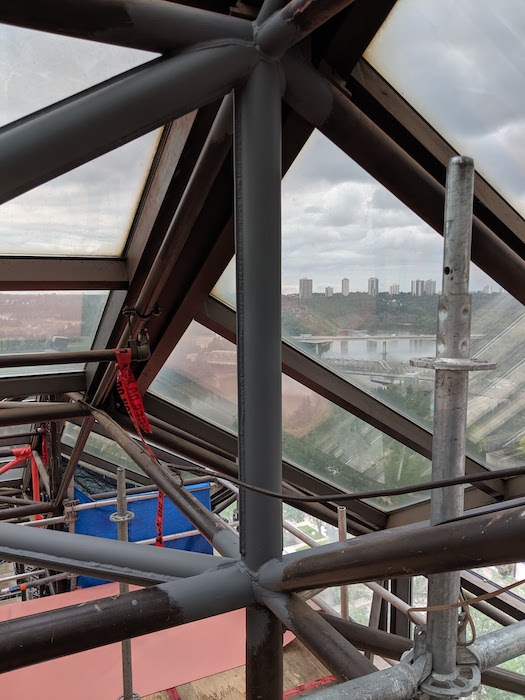 The renovation strengthened the existing structure and integrated it with a new electrical system.

Following the renovation, the ECC benefits from lower operating costs, due to the high-performance envelope and active electricity generation. It is estimated the envelope upgrades alone reduce its heating and cooling costs by about 10%.

The atrium is brighter than ever. The older glazing was significantly tinted to reduce heat gains, with a visible light transmittance of only 18%, whereas the new glazing can selectively control the infrared (IR) spectrum without dark tinting. The new glazing units bring the visible light transmittance up to 25%, even with opaque PV cells covering approximately half of their surface.

Operationally, the solar PV array generates approximately 200 MW-hours of electricity per year, reducing annual costs by approximately $20,000.  When that is combined with the improved thermal performance of the envelope and the efficiency of the LED lighting, the overall renovation is expected to reduce the ECC’s overall energy consumption by 20%.

“Not only does the installation help position Edmonton as an attractive destination for sustainable events,” says Melissa Radu, ECC sustainability manager, “but it has also  encouraged us, our clients and our guests to set loftier goals to support the future of our environment.”