“This is the largest net-zero carbon building in Canada—and it is incredibly difficult to get to net-zero in an existing build.” – Jury 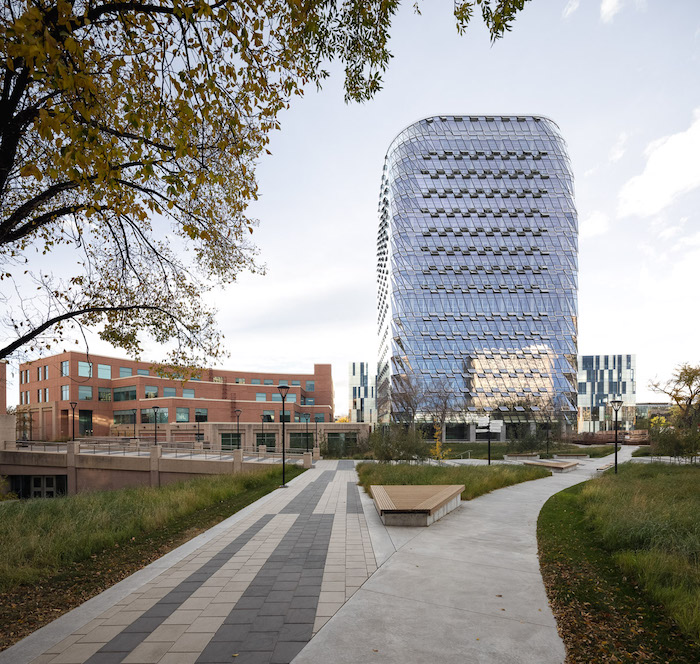 Tree for Life Award and Award of Excellence Winner: Entuitive

As part of its strategic vision for a carbon-neutral campus by 2050, the University of Calgary (U of C) commissioned a retrofit of the MacKimmie Tower—built in 1970—to transform it into a leading-edge, high-performance, net-zero carbon building.

The tower is now 85% more energy-efficient and is the first building in Alberta to be certified to the Canada Green Building Council’s (CaGBC’s) Zero Carbon Building (ZCB) Design Standard. It serves as a model of what can be done to existing, aging building stock. In fact, at press time, the 40,000-m2 MacKimmie Tower is the largest net-zero carbon building project anywhere in Canada.

The retrofit, requested by Alberta’s provincial government, has turned a 50-year-old library building into commercial space, where much of the university’s administration now works in one centralized location, freeing up space in several other buildings for future research facilities or classrooms. 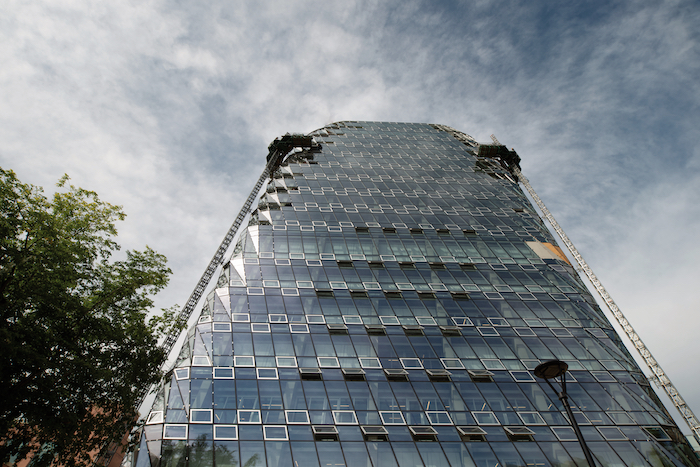 One point of interest is the double-skinned façade, which greatly improves thermal performance. It features active shading systems and fully automated operable windows, both at the inner and exterior glazing line (the automation can be overridden by individuals for comfort).

Immediately after the existing precast panels and asbestos were removed, the interior glazing line was installed, to ensure the building was enclosed as quickly as possible. This enabled work on the interior finishes to advance in parallel with the installation of the exterior glazing skin.

As a result, the trades were able to work on the interior and exterior façade in tandem, rapidly reducing the construction schedule. The university used a phased approach to gradually allow staff to move in and the building was half-occupied by U of C staff while exterior work continued.

Reuse of the 50-year-old structural skeleton was another opportunity for innovation. Removing the weight of the heavy precast cladding—and the library books—made it possible to add two more floors, taking the tower from a 12 to 14 storeys. More efficient elevators were installed in the existing shafts, allowing the design team to reduce the elevator count by one, freeing up a shaft for natural stack effect ventilation.

With more efficient mechanical systems and natural ventilation, 80% of the existing mechanical floor on the seventh level was freed up, allowing for common boardrooms with tall ceilings at 16 ft clear, which added the equivalent of yet another floor.

Passive design controls were also used to achieve net-zero while minimizing energy use and optimizing interior comfort. Other sustainable features include active and passive natural ventilation, high thermal mass construction, daylighting, connections with the university’s district energy systems and renewable energy generation, as photovoltaic (PV) solar panels will be installed at roof level and PV glazing will be integrated within the façade’s glazing at locations with maximum sun exposure. 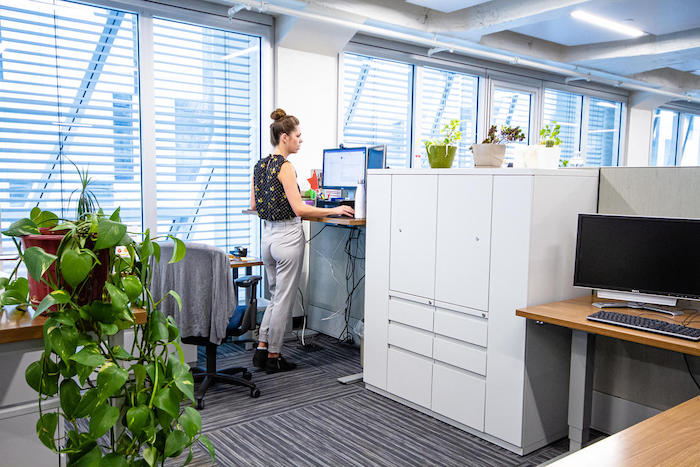 An extensive study was conducted to determine how best to add two new floors without any modifications to the existing columns and lateral load resisting shear wall system. The study found removing the heavy library loads, using live load reduction allowed by the current code and removing the heavy precast panels could accomplish this.

Not only did the extra floors add space, but they also aided in creating the tower’s new esthetic, with its distinctive curved and faceted façade. Many passersby assume a completely new tower was constructed, not realizing it is an existing building that was reclad!

Eight two-storey columns added at the corners were sloped about a vertical axis to provide a wider curvature of the glass. This assisted with the crowning of the building.

The existing concrete waffle slab posed challenges to route new mechanical, electrical and data systems within the structural floor depth. Placing the slab underneath would have resulted in undesirable finishes and would not have maximized the thermal mass properties of concrete.

The solution was to add a raised access floor at every level to integrate electrical, mechanical and sprinklers within the interstitial space, to expose the existing concrete waffle slab and enable its inherent thermal mass properties to facilitate more efficient heating and cooling. Each floor serves the space below it. 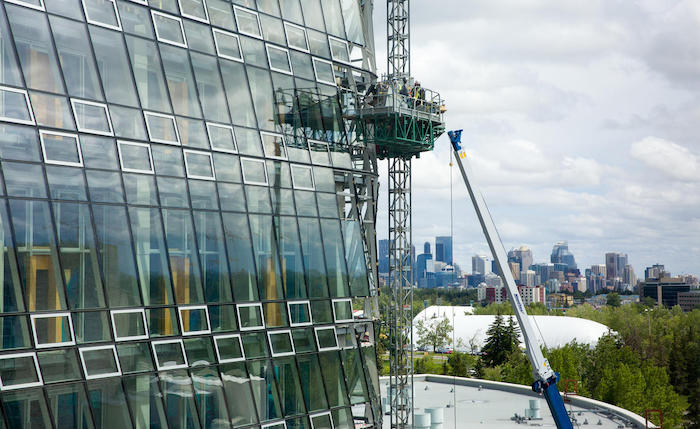 The MacKimmie Tower is part of a larger redevelopment, which will also include the construction of a new building with the same double-skinned façade and energy-efficient mechanical systems. The tower will be connected to the rest of the university by a series of outdoor spaces and promenades, providing places to congregate.

When the entire project is completed, it will offer benefits for students, faculty and staff alike, as well set a new standard for the city of Calgary, Alberta Infrastructure and other post-secondary institutions, as they come to understand the long-term cost savings that larger upfront capital investments in sustainable refurbishments can provide.