Jury Comments: “This bridge won the special award given to a project that showcases how engineering enhances the social, economic or cultural quality of life of Canadians. The bridge demonstrates the strength of wood in a demanding design, supporting road traffic loads on four spans each nearly 43 metres long. It also provides a vital link in a remote community, and the local Aboriginal work force participated in its construction.” 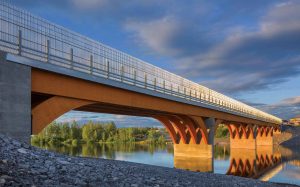 The Cree Nation of Mistissini is located at the southern tip of Lake Mistassini in the James Bay region of Northern Quebec. They wanted a bridge to cross a body of water called the Uupaachikus Pass in order to make some land across the water more accessible for development.
Stantec designed a 60-metre long glue-laminated (glulam) wood beam, semi-continuous arched bridge for the First Nation. The bridge has a unique architecture and is innovative in its use of wood as the dominant building material. The use of wood enabled the local community to participate in the project and promoted the region’s socio-economic development.
Completed in 2014, the bridge comprises four continuous spans combining straight girders and arches in wood. The latter were added inside each span in order to minimize the effects of the interior spans and lend an important architectural aspect to the design.
Above all, the designers had to create a structural system capable of supporting road loads on spans nearly 43 metres long. The longest item manufactured by glulam plants was merely 24.4 metres. To accommodate this assembly challenge, a staggered joint method was used. The shear interface between the arch element and straight beam is distributed through special plates fixed by annular nails. These connectors create an air gap and produce a better uniform stress distribution on the wood.
Given the structure’s complexity and innovative aspects, Stantec involved the timber frame manufacturer and their plant in Chibougamau early in the project, involving them in meetings and allowing the design to be adjusted to the plant’s manufacturing tools.

No expansion joints
The glulam properties made it possible to eliminate expansion joints over the 160-metre bridge, giving the structure greater durability. Since temperature affects wood less than steel or concrete, the designers opted for fixed supports on all sections in order to eliminate the need for expansion joints. This approach proved to be a major asset for structural sustainability, since expansions joints are usually a weakness in steel or concrete bridges due to water damage.
Deck waterproofing and sealing
A membrane adhered to the wood decking could not ensure watertightness; it might tear because the planks are installed with spaces to allow the wood to expand and contract with humidity changes. Instead a marine plywood layer was added over the entire deck surface, thereby allowing for contraction and expansion of the wood, and protecting the deck planks when the asphalt surface has to be replaced in future.
Wooden bridge construction using glulam for load-bearing elements is rare in North America. Codes and standards require the use of rot-resistant materials or, require treatment using a wood preservative. Quebec glulam is sourced primarily from spruce — a very resistant tree species from a mechanical standpoint, but practically impossible to treat using common industry preservatives. As such, Stantec designed a deck with primary protection against all types of weather, while the joints between structural elements (beams and columns) were designed to dry quickly after exposure to rain and snow. As well, a sealing product was used for the wood’s exterior surfaces in order to ensure structural sustainability and enhance its architectural appearance.

A source of pride for the community
The project was warmly welcomed by the people and promoted their participation. The structure’s aesthetic aspects integrated perfectly into the community’s environment and the bridge has quickly become a source of pride. Also, the use of a wooden bridge gives the local community chance to carry out the bridge maintenance without the need to call in outside expertise.
The choice of wood for the construction also promoted the region’s economic development. The price of raw materials in Mistissini is around 25% higher for concrete and steel, compared with larger urban areas. What’s more, the glulam supplier’s plant is less than 90 km from the construction site, and they supply black spruce sourced from the region.
The designers not only compared construction costs of various solutions, i.e. wood versus steel/concrete, but also carried out a carbon footprint analysis, which was based on the foundations (piers and abutments) as well as the deck. In the end, the wooden bridge solution yielded negative carbon emissions equivalent to 497 tonnes of CO2, compared to a steel/concrete bridge with CO2 emissions equivalent to 969 tonnes. In total, the difference between the two solutions was 1,472 tonnes of CO2, equal to the amount of CO2 emitted in the combustion of 640,000 litres of gasoline.
The project has received awards of excellence from the Quebec Association of Consulting Engineering Companies (AFG Quebec) and from the Quebec Transportation Association.