Jury Comments: “Winner of the special award for international work is this project in a Caribbean country that is subject to dramatic weather events. The engineers proposed all manner of civil works to help contain flooding and help to sustain the agricultural community. Perhaps as important is the transfer of knowledge to the Island residents, helping them to continue to make improvements.” 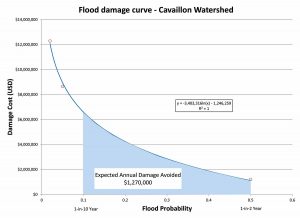 AECOM was commissioned by the Haiti Ministry of Agriculture, Natural Resources and Rural Development (MARNDR) to conduct preliminary studies for flood protection in Haiti. AECOM put forward an innovative technique combining engineering, hydrology and social economy to identify, assess, design and prioritize future infrastructure needs in five watersheds.
The solutions were discussed and agreed with the communities, while providing the best protection against natural disasters and limiting their impacts on the environment — all in the context of climate change.
In its latest report, the Intergovernmental Panel on Climate Change (IPCC) predicts that droughts and major tropical cyclones will intensify, and that heavy precipitation during hurricanes will be more frequent in the Caribbean. Haiti is often subject to flooding, droughts, hurricanes, and earthquakes. It is also one of the most vulnerable countries in terms of climate change when considering both the risks of physical impacts and the environmental and socio-economic factors that aggravate the situation.
An ecological disaster that has persisted for nearly a century in the country is the reduction in forest cover, from 60% in 1923 to less than 2% today. The loss of vegetation has had considerable impact on soil erosion and water retention during heavy rainfall. The frequency and impact of flooding have increased in the valleys, where most of the population and critical infrastructure are located.

Prioritizing the infrastructure needs
To face the growing threat of these natural catastrophes, Haiti implemented a flood prevention program (Natural Disasters Mitigation Program or PMDN) for the most affected areas.
Using an innovative approach, AECOM identified and prioritized the infrastructure needs for five watersheds that cover roughly 2,400 sq.km, or 9% of Haitian territory. The works AECOM proposed consist of a wide range of constructions such as several kilometres of retaining and gabion walls, 200 dykes and sills in gabions, 330 micro-dams and 4,500 gully check-dams.
Besides protecting existing infrastructure (buildings, roads) and controlling flooding, the proposed works will protect farmland and rural activities. They will allow for new crops to be developed and the introduction of animal husbandry on formerly flood-prone zones. Most importantly the works will help to prevent casualties, income and material losses in the local riverside communities.

Adapted technology
Various techniques have been designed recently to determine flooding damage curves by taking into account climate change. However, these curves can only be valid for specific environments and protection works in a given country; unfortunately, they are not available in Haiti.
To address this shortcoming, AECOM adapted a technique specifically for Haiti, enhanced certain parameters and transferred it to the MARNDR. In this way AECOM helped MARNDR select priority measures and intervention sites for investment, based on rigorous social and economic premises.

Combining engineering and socio-economic data
The traditional hydraulic modeling approaches used to compute the extent of flooding are not suitable due to Haiti’s lack of critical historical hydrological and rainfall data. As well, there is insufficient detailed and accurate topographic data available.
Since flooding has long-lasting negative impacts on agricultural parcels, urban and rural infrastructures, as well as on the victims, AECOM designed an innovative methodology that takes a more comprehensive approach to the impacts of past flooding events. The approach combines engineering (notably hydrology) and socio-economics to estimate the probability and the impact of flooding events and to compute the corresponding damage curves.
AECOM trained 25 Haitian staff to collect engineering, sociological, economical and hydrological data, based on spatial analyses. They surveyed 1,200 households to gather data on damages and the extent of flooding during the last hurricanes and tropical storms. A unique technique for household sampling, based on the overlaying of several GIS layers was used (land use, built density and flooding risks).
With this technique, data gathering is much more precise, less time-consuming and more economical compared to traditional techniques used to estimate flooding impacts.

Reducing gullies and silting
The infrastructure proposed by the study will have positive impacts on the environment. For example, the works planned in the upstream areas of the watersheds will reduce the formation of gullies on steep slopes and help to trap sediments. This will help to prevent silting at structures such as dams and irrigation canals downstream. The works also protect infrastructure along riverbanks, such as roads and ditches that can be damaged or destroyed by bank erosion, scouring, and landslides.
Furthermore, water-harvesting structures such as small dams and hillside impoundments yield benefits for the water table. They also provide irrigation for increased crop production, which further prevents erosion.