Jury Comments: “Winners of the Outreach special award, COWI engineers reviewed the design for this 81-metre footbridge, provided funding and sent a team to help with the construction. The bridge crosses a fast-moving river and gives the remote community its first year-round access to schools, clinics and markets in a nearby town. The impact of the project is truly life changing both for the community and the engineers involved.” 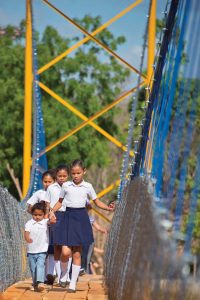 The isolated community of Rio Abajo in Nicaragua required an 81-metre footbridge over a fast-moving river to gain year-round access to schools, clinics and markets in a nearby town.
As part of a Bridges to Prosperity (B2P) industry partnership program, the COWI North America (COWI) and Kiewit team reviewed the footbridge design, provided funding and sent a team to construct the bridge with local volunteers. The team successfully completed the project on an impressive accelerated construction schedule, despite challenges due to the rural environment and a language barrier.
Swim or walk
Rio Abajo is a 3,000-person agricultural community with little more than a primary school and corner store. The town is a 30-minute walk from Pueblo Nuevo, a larger town that offers essential facilities such as a health clinic, secondary school, stores and markets. However, without a bridge to cross the river that separates the towns, during rainy season the Rio Abajo residents must walk two hours in the opposite direction to another major town, or swim across the fast-flowing river to Pueblo Nuevo.
Briselba Zavala Morales, a Rio Abajo elementary school teacher, told the B2P team of how she would cross the river to work each day. During her pregnancy, she narrowly escaped when the flooded river caught her and dragged her downstream. She has heard of this happening to children, too.
The flooded river prevents children from attending secondary school year-round, inhibits the ability of farmers to deliver their goods to market, and creates a barrier to accessing healthcare services.
In 2015, COWI and Kiewit volunteered with B2P, a non-profit organization, to construct a footbridge over the dangerous river and help the Rio Abajo overcome their isolation. B2P works with bridge designers and constructors, local governments and student groups to build essential footbridges with rural communities in underdeveloped parts of the world. The goal of the Rio Abajo project was not only to create the year-round link, but also to provide the community with the skills necessary to maintain the bridge.

Team effort
The wide river crossing required an 81-metre long bridge, which is B2P’s second largest suspension bridge worldwide. COWI and Kiewit each donated $25,000 to cover the cost and sent a combined crew of 12 volunteers to construct the bridge with the local residents.
The project was a great success, with the superstructure completed in just eight days. Key to this achievement was the strong team effort: COWI’s design review complemented Kiewit’s construction expertise and the team worked well with the local volunteers to keep the project moving forward.

Lack of resources and language barriers
The project challenges included constructing with a lack of resources in an underdeveloped rural environment. With limited options available, the team often had to improvise to complete the project.
The local volunteers were inexperienced in bridge construction and jobsite safety, many wearing personal protective equipment for the first time in their lives. The language barrier meant communicating using hand gestures and rudimentary Spanish. Overcoming these challenges required resourcefulness and flexibility from the entire team.

Employees used own time and funds
In addition to bridge construction, COWI engineers completed a design review of the B2P-designed footbridge. More than 20% of COWI’s engineering staff voluntarily worked on this review. The design was divided into six packages, each of which was reviewed by a designated team. As well as reviewing the Rio Abajo design, COWI recommended improvements to B2P’s standard footbridge design, which B2P has now implemented into their design package.
Furthermore, while the companies donated for the bridge materials, the four COWI engineers who travelled to Nicaragua to complete the construction did so entirely using their own funds and vacation time. The hours to plan and complete the project — the flights, fundraising, transportation and accommodation — all came out of their own time and pockets.
Nicaragua is the second poorest country in Latin America. The World Bank estimates that just 655,000 of Nicaragua’s 2.3 million rural residents live less than two kilometres from an all-weather road. With its new footbridge, Rio Abajo residents can now safely travel to work or the market. The bridge diminishes isolation. Life in Rio Abajo stabilizes, and the local economy can develop and move towards self-sufficiency.