“An impressive showcase project and a beautiful end result for a landfill site.” – Jury 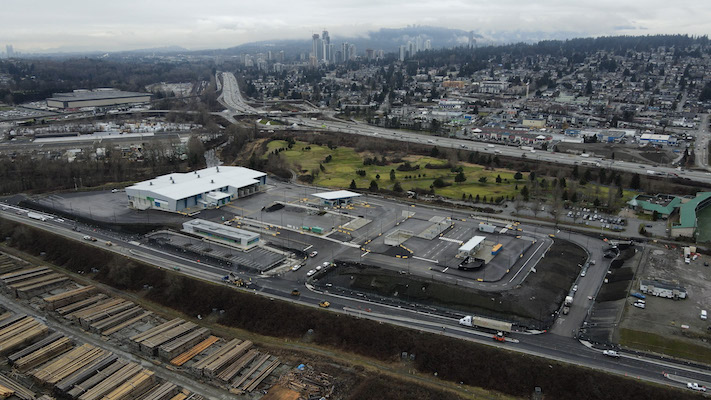 Metro Vancouver’s new United Boulevard Recycling and Waste Centre sits on 6.2 ha of brownfield on the former Coquitlam Landfill. Morrison Hershfield’s (MH’s) project team implemented innovative and sustainable engineering solutions to overcome unique challenges and allow for the safe and reliable development of this large structure on a closed site. The facility has a vital role in Metro Vancouver’s efforts to reduce waste, meet ambitious regional recycling and waste diversion goals and move to a circular economy.

The steel superstructure is the size of nearly four hockey rinks, with a clear span of 71.4 x 98.5 m providing flexibility for operations and maneuvering. The transfer building has a 5,800-m2 flat tipping floor, three material chutes, a below-grade compactor and a maintenance garage. The facility features free recycling area access ahead of the scales.

By replacing an old facility that was situated on leased land, the new full-service United Boulevard Recycling and Waste Centre saves Metro Vancouver the cost of rent. It is a full-service facility catering to customers arriving in commercial, municipal and small vehicles.

A free recycling depot is three times larger than its predecessor, with twice as many weigh scales and options for recycling a wider variety of items. This one-stop drop-off facility will make waste management more convenient for the region’s residents and many waste haulers with operations centres located nearby.

The centre has a processing capacity of about 600 tonnes per day and is open 363 days a year, serving about 200,000 customers. More space and improved traffic flows will reduce wait times and improve safety. Further, the site is expandable.

Sustainable innovation was a priority. By way of example, more than 40,000 tonnes of incinerator bottom ash—which would otherwise go to waste—was used as structural fill to construct the ground features, including the sub-base for the new transfer station. In fact, no material excavated on the site ever left the site. It was all reused.

A concrete mat foundation supports the massive transfer building, to eliminate potential complications related to piles penetrating the base of the landfill. The landscaping design includes low-maintenance native species planted above a geomembrane liner system. Several invasive species found on-site were removed. Wastewater biosolids were used in the growing medium for vegetated areas.

Active transportation is encouraged by integrating a mixed-use walking/biking path along the frontage of the site. High-efficiency and natural lighting is incorporated, taking care to minimize its impact on the nearby Brunette River habitat.

The site is sealed to prevent infiltration and leaching of contaminated water. An impermeable geomembrane barrier, asphalt and concrete meet BC Landfill Closure Criteria. Surface rainwater is redirected to the stormwater collection system, while landfill gas is directed from below to its own collection system, which burns methane and other harmful emissions, reducing them by 99%. 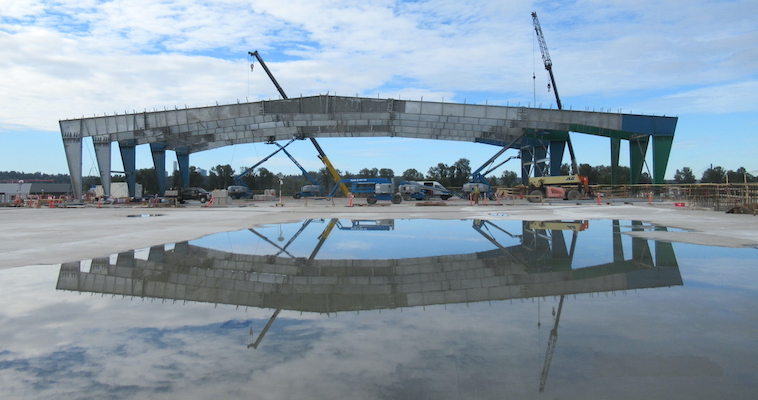 Constructing on a former landfill involved specific structural and environmental challenges, such as mitigation of landfill gas, total and differential settlement due to municipal waste compression, vector control and cut/fill balance of grading.

The prefabricated metal building has flexible utility connections and rests on a slab-on-grade concrete foundation to resist twisting and cracking. Site grades avoid significant excavation depths into the MSW and grading fill heights that would trigger significant settlement.

Landfill gas is managed by an active system, a liner system including utility ‘boots’ for slab penetrations and a liquid membrane beneath the building slabs. Raft foundations sitting well above the MSW allow for easier application of membranes to prevent landfill gas from accessing the building.

Metro Vancouver is responsible for waste reduction and recycling planning, a solid waste regulatory framework and the operation of solid waste facilities throughout the region, with an overarching goal to reduce waste and maximize recycling.

“We are already a North American leader in waste reduction and recycling, with a 64% diversion rate,” says Jack Froese, chair of Metro Vancouver’s zero-waste committee. “This new facility will help us reach our regional goal of an 80% recycling rate.”

Construction began in 2018, transforming a completely undeveloped brownfield site into an asset for the community. The centre opened to the public in March 2022.