“A beautiful project where the engineering work was invisible at the end.” – Jury 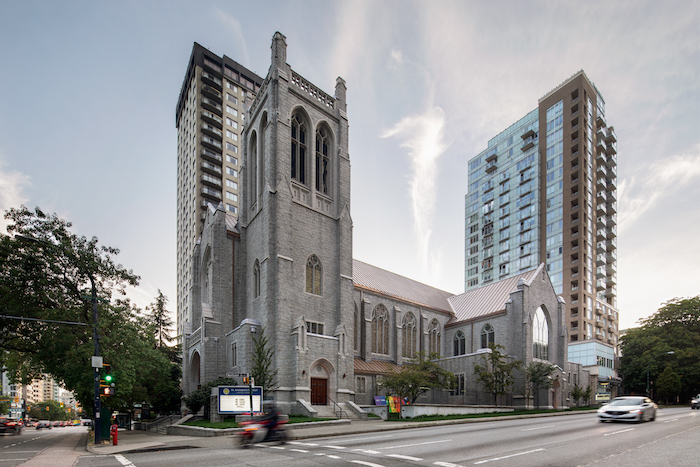 Initially, the renovation project entailed a roof replacement. Once the extent of interior deterioration was determined, however, the scope of the project expanded to replacing all of the interior plaster surfaces. This presented an opportunity for a seismic upgrade.

As a stand-alone Class A heritage building, St. Andrews was precluded from typical adaptive reuse schemes that have upgraded other church sites. A restoration-based conservation plan was necessary for the church interior, as well as a clever approach to constructability to ‘conceal everything’ and maintain its heritage esthetic.

Much of the work involved replicating the existing finished-surface plane, using a point cloud to define where upgrades could be hidden. New shell castings of the original plaster helped recreate the interior’s original appearance. Concrete overlays, steel drag struts and fibre-reinforced polymer wraps were thoroughly hidden. In addition, the new cast plaster was anchored to the structure to prevent the debonding issues that plagued the previous installation.

The upgraded structure was topped off with a new copper roof, detailed to reflect the church’s heritage while increasing overall thermal performance. A façade stabilization program restored weathered mortar and added mechanical fastenings to secure the exterior stone and terra cotta features.

Considerable concrete in the original build was used as a fill material within a stone masonry construction. As such, many walls and columns lacked embedded reinforcing steel.

Thermal performance and general occupant comfort were also weak. The church had never been subject to a comprehensive design approach for building systems and envelope design.

An updated take on the form and function of the interior facilitated the adaptation of a structural design very much in keeping with the original interior massing. A strict drift limit was applied to the building analysis as a whole, to minimize the effects on the unreinforced concrete elements. New thermal modelling and hidden mechanical systems were implemented to prevent excessive thermal bridging through hidden structural steel in the roof deck and to increase occupant comfort throughout the year.

The bell tower, effectively an eight-storey stone building on the corner of the church, lacked an effective foundation to resist overturning. Judiciously applied structural steel and concrete resulted in a moderately ductile design, fully restraining all of the stone and terra cotta features while leaving room for the bells. 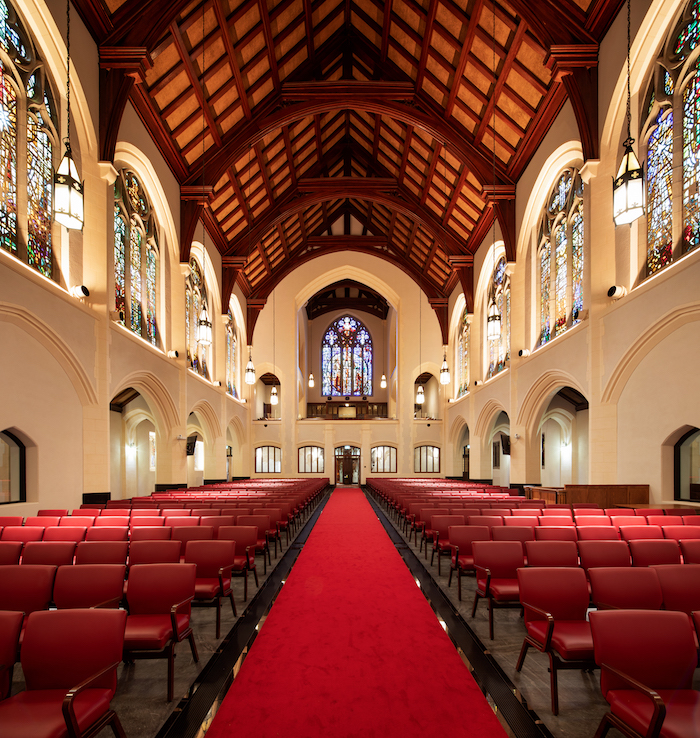 Pews were replaced with chairs for greater flexibility of use. Photo by Adrien Williams, courtesy RJC Engineers.

A bespoke plan was needed for the church to continue to be a significant community fixture. Adam James, principal at Ryder Architecture, described the process as “using a 21st-century skill set to analyze and facilitate remediation and upgrades to retain the building’s heritage value for the next hundred years.”

Among the decisions during design was to create a new functional space plan for the main sanctuary. Allowing for a more efficient structural design, this included replacing the original pews with chairs for a more flexible layout for community functions, weddings and concerts.

Changes also included renovations to meeting and multi-purpose rooms to accommodate additional programming needs, accessibility improvements (such as ramps) and upgrades to audio/visual (AV) systems. These changes create a more versatile and inclusive facility that respects the church’s character and charm while offering the amenities of a modern-day building.

The uncovering of the 1930s building also opened several opportunities to improve the church’s environmental impact. The design team worked to discover where sustainability and resiliency upgrades could be applied.

Resiliency reduces the future need to invest more embodied carbon into repairs and replacements. The roof, for example, was restored with copper, a 100% recyclable material with indefinite service life, and a high-performance assembly to achieve airtightness and significantly reduce heating and cooling demands.

The seismic and structural upgrading, meanwhile, is expected to achieve earthquake resiliency similar to that of buildings constructed today with life-safe performance, thereby reducing repair and downtime costs should the church be subject to the design earthquake in the current National Building Code of Canada (NBCC). While extensive use of reinforced concrete was necessary for seismic resiliency, this embodiment of energy and carbon is offset by the project’s 100-year design service life.

The renewal of this significant civic and architectural landmark both celebrates the church’s rich history and ensures its long-term future through substantial improvements to seismic resiliency, building envelope performance, occupant safety and accessibility, “navigating the complexity of the project and delivering a beautiful result that the church can be immensely proud of,” according to the church’s executive director, Diane Mitchell.