“Canada is among the best-positioned countries to reach net-zero and hydro is the main reason.” - Patrick D. Bateman 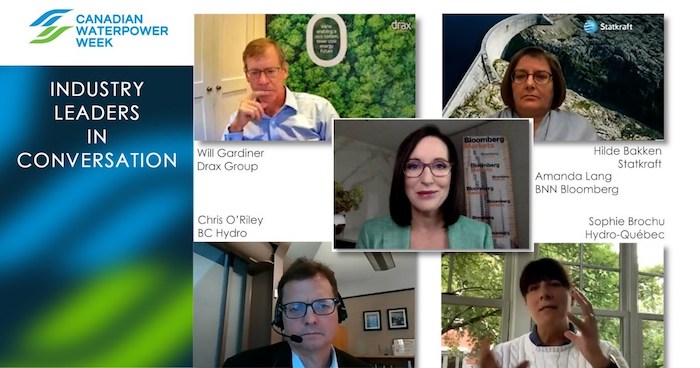 Last week, more than 300 participants came together for the 2021 Canadian Waterpower Week, a virtual event for the hydroelectricity industry, with a focus on its role in reaching net-zero carbon emission goals.

Hosted by Ottawa-based trade association WaterPower Canada (WPC), the conference featured experts from across the country and around the world. They discussed a variety of measures that could help Canada achieve its 2030 Paris Agreement climate-change commitments, such as refurbishing existing hydroelectric facilities, configuring reservoirs for pumped storage hydropower (PSH) and producing ‘green hydrogen.’

As WPC president and CEO Anne-Raphaëlle Audouin pointed out when she introduced the conference, hydro already supplies some 60% of Canada’s electricity. Further decarbonization of the economy will require both (a) sourcing more electricity from non-emitting sources, which can include not only hydro, but also nuclear, wind and solar, and (b) widespread electrification, where electricity supplants emitting forms of energy, e.g. replacing traditionally petroleum-fuelled vehicles with electric cars.

“The world needs an accelerated energy transition,” agreed Dolf Gielen, director at the International Renewable Energy Agency’s (IRENA’s) innovation and technology centre in Germany, who delivered a keynote address. “Hydro is the largest renewable source in the world—and cheaper than fossil-based production—but we need significantly more hydropower and refurbishment.”

Accordingly, conference sessions focused on maximizing the performance of existing hydropower generation stations. SNC-Lavalin, for example, is involved in doubling the capacity of Ontario Power Generation’s (OPG’s) Calabogie Generating Station. Replacing the facility’s original, century-old powerhouse will pave the way to increase output from 5 to 10 or 11 MW next year. General Electric (GE), meanwhile, presented robots that can undertake facility repairs in unsafe conditions.

OPG also discussed the long-in-the-works conversion of Eastern Ontario’s Marmora Mine property into a 400-MW PSH facility. With a raised reservoir adjacent to an open-pit mine, water can be pumped within a closed-loop, off-river system, generating power as it moves down from the upper to the lower reservoir. This enables the generation of additional hydroelectricity to be timed for when it is most needed by the grid.

“We are seeing major interest around the world in PSH projects,” said Stanley J. Kocon, president and CEO of U.S.-based Voith Hydro. “Their contribution to reliability and resilience is really invaluable for clean power grids.”

Another discussion explored opportunities for electrolysis to extract hydrogen from water. If this process is powered by renewable energy, such as hydroelectricity, the result is referred to as green hydrogen. That hydrogen can then be stored, such as in a fuel cell, until it is needed.

From the consulting engineering community, the conference attracted AECOM, BBA, CIMA+, the aforementioned SNC-Lavalin and WSP Canada as sponsors. And as further hydroelectric refurbishment, PSH and green hydrogen projects are launched, opportunities will ramp up for consulting engineers across the country.

“Canada is among the best-positioned countries to reach net-zero,” said Patrick D. Bateman, recently appointed senior vice-president (SVP) of WPC, “and hydro is the main reason.”