Unlike fossil fuels, wood chips, when or if ever spilled, will not cost anyone an enormous amount of money to clean up. 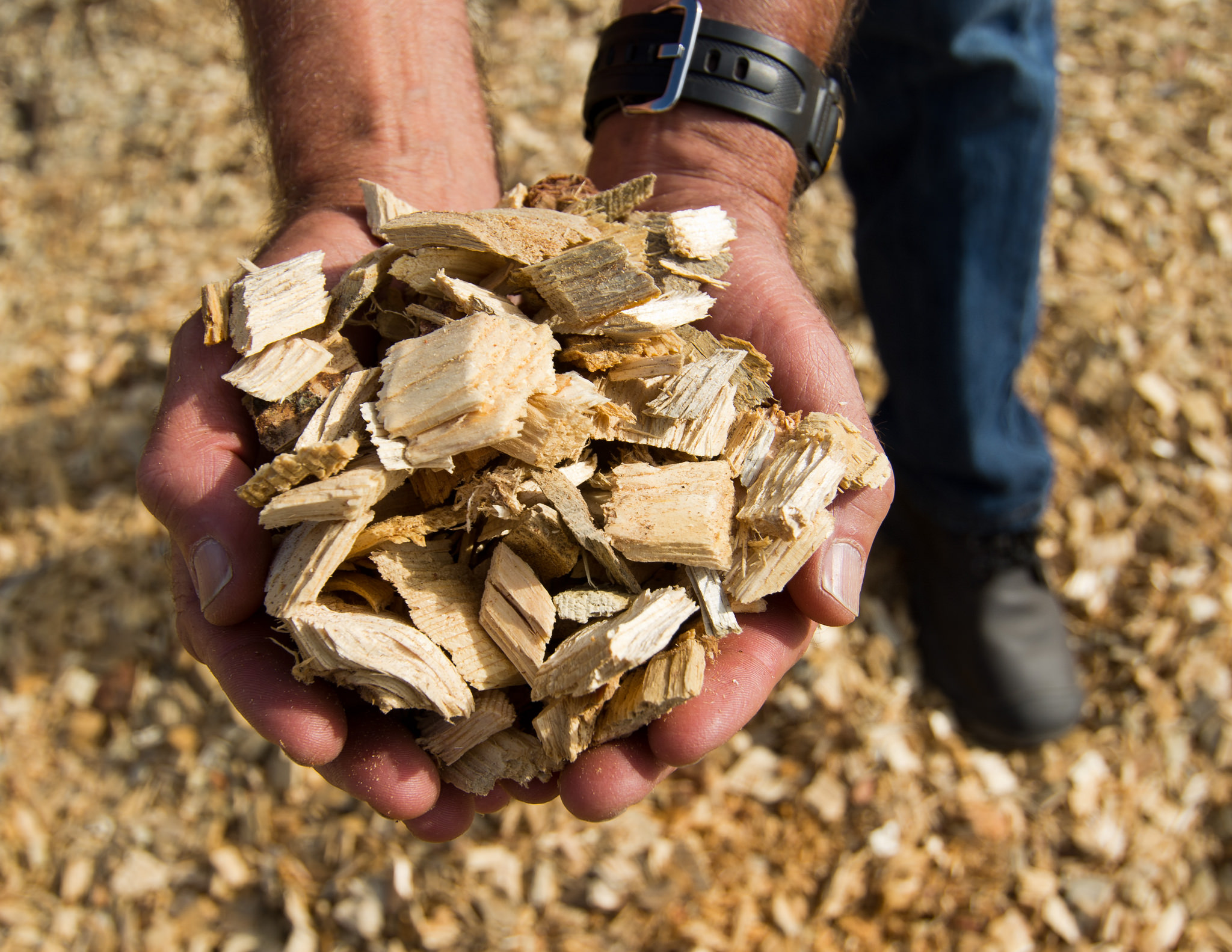 One renewable energy option that is especially prominent in the north is biomass energy. In a recent study (A 100% Renewable Energy NWT by 2050 — Starting the Conversation), Alternatives North hired a consultant to analyze how the Northwest Territories (NWT) could get off of non-renewable energy using only technologies that are available and could be implemented today.

The somewhat surprising outcome of this study and report was that even if the NWT went 100% renewable, the percentage of the energy represented by solar and wind could represent less than 5% of the pie. In the 2050 envisioned in this report, 58% of the energy used in the NWT could come from wood and wood pellets.

Although the results may seem surprising to some, it makes sense given how and where the NWT consumes energy. There are two major factors that influence the aforementioned outcome. First, the majority of the energy used in the NWT is not used to power lights, electronic devices, or other equipment, rather a larger percentage of the energy used in non-industrial applications is required for heating.

The north gets cold, and so it takes more energy to heat homes and commercial buildings than to keep the lights on and electronics running. This brings us back to solar and wind energy drawbacks. Except for the proportionately small use of direct solar heating (“solar thermal”) that can be used to provide you with a hot shower when the sun is shining, wind and solar energy projects convert the renewable energy into electricity (through wind turbines and solar panels). 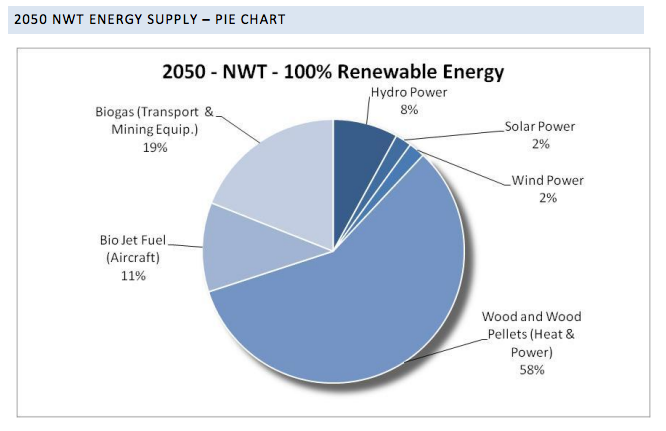 From the report: A 100% Renewable Energy NWT by 2050 — Starting the Conversation.

If what you need is heat, not electricity, converting wind or solar to electricity and then to heat is an option, but a fairly expensive one. As of today, most building heat in the north relies on a fuel that can be stored for long periods of time, delivered by barge or truck, and is available during the long winter season when the sun is not shining and the wind is not blowing. Therefore, finding a replacement for this type of fuel is a key component to minimizing the north’s reliance of fossil fuels.

Currently in the NWT, the majority of heating systems burn heating oil (or propane and natural gas in select locations) to directly generate heating for homes and businesses. This is where biomass comes in. Like fossil fuels, wood pellets and wood chips and even cord wood can be transported, stored, and can last many months in storage until needed. Unlike fossil fuels, wood chips, when or if ever spilled, will not cost anyone an enormous amount of money to clean up. Leftover wood chips could even be used in the spring as mulch for landscaping.

The second factor that makes replacing fossil fuels with renewable wood products so attractive has been the low cost. This, combined with their direct ability to replace the status quo of a stored heating fuel that can be burned in a boiler or furnace for small and large applications, has made wood a popular choice.

The cost of heating a home in Yellowknife with wood pellets has been found to be 20% to 50% less than the cost of heating that same home with standard home heating oil. The realized cost savings combined with having a more positive impact on the environment has inspired many building owners to install wood pellet biomass boiler systems.

Another major factor when it comes to looking at renewable energy options for the north is the very large and spread out nature of the population and infrastructure. There is a lot of space, not a lot of people, and the small clusters of people and buildings that do reside here can be quite far away from each other. This has two major implications: one, it takes quite a bit of energy to get people and things to where they need to go in the north; and two, there are not a lot of gas stations along the way.

In addition, there’s a high probability that there may not be any roads that you can access depending on which community you may need to get to. As a result, more energy is used to get around than in southern urban areas. Since some northern communities are not accessible by road, the north uses a significant amount of jet fuel for air travel, as well as motive diesel fuel for trucks driving the winter roads and all-weather roads where these exist. This is where the study introduced the idea of replacing jet fuel with biofuel, a burnable oil product that is derived from plant materials instead of from fossil fuels. Biofuels were also seen as a viable alternative for mining equipment operation (heavy machinery) that currently burn motive diesel, and for long-distance road transportation.

Another renewable energy source that gets a lot of attention is the existing and potential hydroelectric power in the NWT. Like wind and solar, hydro generates electricity, not heat, but it has the advantage of being a fairly large part of the NWT’s energy portfolio already due to the hydroelectric dams that were historically put in place to support the mining sector. This has an added benefit over wind and solar because traditional dams have a built-in energy storage device in the form of a reservoir or lake. Moving forward, hydroelectric will continue to play a part in the renewable energy plan for the NWT.

What will 100% renewable energy in the NWT look like? I might ride my electric bike home from my wood pellet heated office at the end of a day, smelling something like french fry oil burning instead of diesel exhaust from the cars on the road, then heat my dinner in an oven powered by the hydroelectric dam, and throw some wood in my wood stove. Then I might have a nice bath in water heated off my wood pellet boiler.

Really, that doesn’t sound like it would have to wait until 2050 at all. In fact, a person can do most of those things today — except maybe for smelling french fry oil on the streets instead of diesel exhaust. That one may take a little bit of work yet.

Williams Engineering has been designing biomass boiler systems and has been involved in studies around the use of biomass heating systems in the NWT since 2006. Elaine Carr has been involved with the design and installation of many wood pellet boiler systems over the last decade. She has also held the volunteer position of president of the NWT Biomass Energy Association.

(This article originally appeared online on the
#GreatEngineering blog at williamsengineering.com)