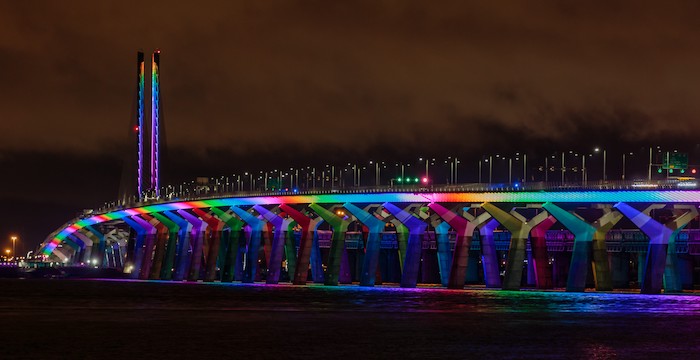 The International Association for Bridge and Structural Engineering (IABSE) has announced the laureates for its 2020 awards, including the first honour for a Canadian structure since the program was initiated in 1998—the new Samuel De Champlain Bridge over the Saint Lawrence River, connecting Montreal and Brossard, Que.

IABSE presented this year’s Outstanding Structure Award (OStrA) to the Hong Kong Zhuhai Macao Bridge (HZMB) in China, which was completed in 2018. At 55 km, it is the world’s longest sea-crossing link, comprising a series of reclamations, artificial islands, immersed tunnel sections, marine viaducts and cable-stayed bridges, connecting 11 cities and reducing vehicular journey time between Hong Kong and Zhuhai from four hours to one. Consulting engineering firms that contributed to the project include Arup, Mott MacDonald and YWL Engineering.

The 3.4-km Samuel De Champlain Bridge, meanwhile, is one of three projects to win finalist awards. Designed and built on an aggressively accelerated schedule to replace its deteriorating predecessor, the cable-stayed bridge was completed in 2019. It uses prefabricated steel and concrete elements and is part of one of the largest transportation infrastructure projects underway in North America, an 8.4-km-plus corridor with highway approaches, overpasses, interchanges, ramps and widenings, plus the Île des Soeurs Bridge. Arup also worked on this project, along with SNC-Lavalin, T.Y. Lin International Canada and Systra International Bridge Technologies.

The other finalist award-winners this year are: the 7.2-km Cheonsa Bridge in Korea, which opened in 2019 and connects the islands of Amtae and Aphae; and Norway’s 1.1-km Hålogaland Bridge, the longest suspension bridge ever built north of the Arctic Circle, completed in 2018.