May 1, 2010
by Canadian Consulting Engineer 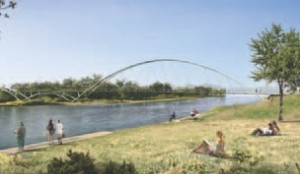 The chair of this year’s jury was Isabelle Courville, president of Hydro-Qubec TransEnergie

In June the new LEED Canada rating system becomes mandatory. An applicable Reference Guide will be released then as well.

The new system includes numerous changes. For example, the New Construction and Major Renovations rating has been merged with Core and Shell into one document.

The total point score is now 110 rather than 70. Points are weighted according to their environmental importance, and there are regional priority credits.

Performance thresholds have also been changed. The threshold for on-site wastewater treatment, for example, has been reduced to 50%, but there is a new prerequisite for water efficiency. Outdoor air ventilation rates have to be 30% above ASHRAE Standard 62.1-2007. Fire suppression systems must be free of ozone-depleting substances.

The certification process has been reduced from three rounds to two, eliminating the audit round.

ENVIRONMENT: Mirror, mirror on the walls

Environmental groups are suing the owners of Consilium Place on the outskirts of Toronto for causing the deaths of thousands of migratory birds in the past decade. The birds fly into the 17-storey complex’s mirror glass walls.

New research supported by ASHRAE indicates that non-chemical devices to prevent problems such as Legionella in cooling towers don’t work. The research by Dr. Radisav Vidic at the University of Pittsburgh evaluated five technologies and found none measurably reduced planktonic or sessile microbial growth in the cooling towers.

The American National Standards Institute (ANSI) has approved VF-1, Fire Design Standard for Vegetative Roofs. The standard sets out criteria for prudent roof design and mandatory maintenance. It was created by industry associations Green Roofs for Healthy Cities and SPRI.

The Walkerton Clean Water Centre will officially open its new facilities in June. The centre is located in the town that became infamous in 2000 after its public utility distributed contaminated water, which led to several deaths and thousands becoming ill. The tragedy and subsequent inquiry prompted widespread changes in the water treatment sector throughout Ontario and the rest of Canada.

The Walkerton centre is an agency of the Ontario government and provides hands-on training and education to drinking water system operators, and system owners. It also has a demonstration facility for leading water technologies.

Halsall Associates together with RFR of Paris, France won a competition to design a concept for the St. Patrick Island pedestrian bridge to cross the Bow River in Calgary. The design competition held by Calgary Municipal Lands Corporation was a rare event and initially drew 33 entries, many from consulting engineers. All 33 designs are shown at www.calgarymlc.ca/submissions

Eventually three teams were short-listed (Halsall/RFR, ARUP, and Buckland & Taylor) and the public was invited to give its input. Over 2,000 comments were received, but the final decision was left to an advisory committee on March 22.

Halsall-RFR’s winning design is a low profile arched structure that springs from the city’s East Village onto St. Patrick’s Island, then to the neighbourhood of Bridgeland to the north.

The public apparently appreciated the winning project’s simplicity and saw it “emulating a stone skipping across the Bow River.” Others saw it as rolling foothills or the Chinook arch. The new $20-25 million bridge should be completed by 2012. John Ford, P. Eng. is project manager at Halsall.

Calgary has another new bridge being built farther upstream. The “Peace Bridge” is designed by Spanish architect Santiago Calatrava.

Chinook Roads Partnership, a 50/50 joint venture of SNC-Lavalin of Montreal and Acciona has won a contract from Alberta Infrastructure for the largest single highway project in Alberta’s history. The P3 partnership will design, build, operate, maintain and partially finance the southeast section of Calgary’s Stoney Trail Ring Road. With six lanes, the 25-kilometre stretch will include nine interchanges, one road flyover, two rail flyovers and 27 bridges.

Construction is set to begin in May, with an opening in the fall of 2013.The Chinook Road Partnership will operate and maintain the highway for 30 years. Their contract is worth $769 million.