The line is slated for completion this year. 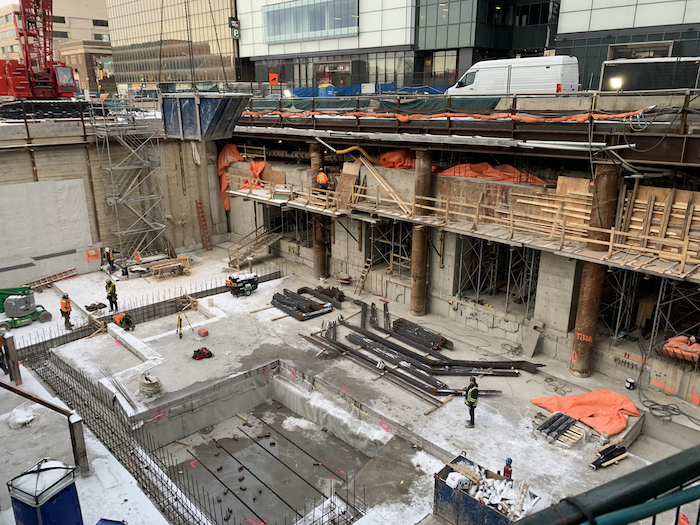 Over the last decade, Ontario transit agency Metrolinx and the Toronto Transit Commission (TTC) have undertaken the planning, design, and construction of the Eglinton Crosstown light-rail transit (LRT) line, which is slated for completion this year.

Uniquely integrated into the city’s existing TTC subway system, the 19-km long line is the largest transit expansion project in the city’s history. It will allow riders to travel east and west through 25 stations and stops along Eglinton Avenue, up to 60% faster than the existing bus service.

Opening later this year as Line 5, the Crosstown is owned by Metrolinx and will be operated by the TTC. Among the stops are 15 underground stations with connections to the TTC’s Line 1 (at Eglinton and Cedarvale Stations), Line 2 (at Kennedy Station) and Line 3 (Scarborough), three GO Transit rail lines and more than 50 links to bus routes.

Design, construction and maintenance have been the responsibility of Crosslinx Transit Solutions, a consortium of ACS-Dragados Canada, Aecon Group, EllisDon and SNC-Lavalin. The design joint venture (JV) has been led by SNC-Lavalin and IBI Group, working with more than 30 architectural and engineering firms. LEA Group, for example, has provided engineering services for three large underground stations, including the most complex: the Eglinton Interchange station, connecting TTC Line 1 and the Crosstown.

The greatest challenge at this station was ensuring existing service could continue while constructing the Crosstown beneath the subway.

Located below the very active intersection of Eglinton and Yonge Street (and approximately 13.5 m below the existing Yonge-University subway line), the station provides access between Lines 1 and 5, with a bus terminal and to all four corners of the intersection.

Simply constructing beneath the existing subway wasn’t the only challenge. In addition to three secondary below-grade entrances, the design had to consider at-grade facilities, including a glazed main entrance at the intersection’s southwest corner, an emergency exit building integrated with tunnel ventilation shafts (TVSs), the Toronto Salvation Army’s new headquarters (HQ) east of Yonge and further new TTC subway TVS buildings north and south of Eglinton.

The main LRT station structure box consists of two- and three-level reinforced concrete units. It transitions at its east and west ends, with reinforced concrete tunnels and a crossover specialty track structure to connect to twin-bored tunnels previously procured and constructed under a prior contract. Below a temporary traffic deck installed along the station area at Eglinton is a deep shored excavation, where the station was constructed using the “cut-and-cover/bottom-up” technique. The cut-and-cover excavation was 270 m wide and, on average, 23.5 m deep. With an average external width of 17 m, the station accommodates a 95-m long passenger platform. 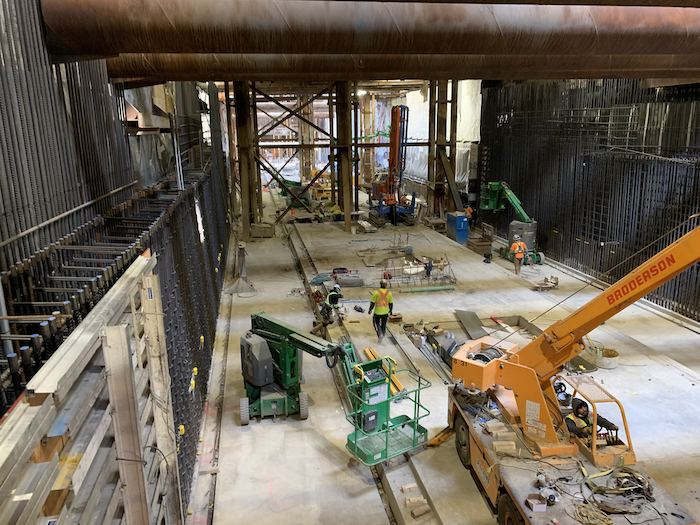 The biggest challenge was ensuring subway service could continue while the new station was being built. Photo courtesy LEA Group.

As part of the Crosslinx team, LEA provided structural and utilities design services and construction assistance for three of the Crosstown stations.

For the interchange station, considering the location’s existing geotechnical conditions and proximity to adjacent high-rise buildings, including a 65-storey condo development at the intersection’s northeast corner, structural engineering required a rigid reinforced concrete box, as buildings impose higher surcharge loads on both the permanent LRT structure and temporary shoring systems. For the main entrance, a below-grade reinforced concrete structure will inter- face with the TTC subway concourse and the Crosstown upper concourse levels, while an above-grade frame includes a steel structure at the building faces and roof, consistent with system-wide detailing.

Among the challenges for engineering and constructing the Eglinton Interchange station was the underpinning of the existing TTC subway. The excavation extended approximately 13.5 m below this line, which remained fully operational throughout all stages of construction.

The construction process included erecting and jacking structural steel for underpinning beams and columns below and next to the subway line, followed by tied-back shoring and excavation to the base of the interchange station, as well as bottom-up construction of the permanent reinforced concrete station structure, providing support to the subway. Engineering design and approvals for the underpinning took place between 2015 and 2018. Construction took place between 2018 and 2021.

An underpinning “needle beam” grid was installed below the TTC subway base, along with support girders and columns at each side. The construction created a structural steel “cradle,” which carried the TTC subway load to deep foundation units that had been pre-installed prior to excavation.

Throughout construction, movement control at the subway ensured a 2-mm differential deflection limit at existing structure joints. Computerized jacking control was implemented during the installation of the needle beams under the subway, sequentially balancing and transferring the subway load to these supports.

Large-scale jacking capability was also provided at each underpinning support column for necessary adjustments of the overall subway structure during subsequent excavation and construction.

The structural components of the interchange station were complex, substantial and critical. They were completed through thorough modelling, analysis and engineering design, extensive geotechnical investigations, carefully sequenced underpinning construction, shoring and permanent work stages, and continuous monitoring of existing TTC and support-of-excavation structures during the process.

For permanent construction, the needle beams below the subway were encased in a 1.5-m thick reinforced grillage slab, while additional columns were installed below this grillage. An important consideration was the removal of all earth fill and limits on activity on the subway roof until the completion of the permanent unit below.

In addition, several new vertical circulation elements have been constructed to connect the subway and LRT lines, including a new staircase through the invert slab of the subway, a dual escalator set connecting to the south side of the LRT station and a new dual escalator and elevator at the existing Line 1 Eglinton station.

Developing a solution to support TTC’s existing Line 1 Subway and maintain service while constructing the Crosstown LRT beneath it required extensive planning, co-ordination and the area’s pre-eminent design and construction capabilities. LEA’s structural engineering team provided the technical expertise to overcome the challenges and accomplish this feat of extreme engineering.