Project leaders and local and provincial officials recently marked the start of construction on the Ontario Line subway project with a groundbreaking at Exhibition Station in Toronto, Ont. HDR has assisted Metrolinx as technical advisor on the $10.9 billion Ontario Line project since 2020.

The work at Exhibition Station will set the groundwork for other major construction on the Ontario Line. The station is already a popular destination served by GO Transit’s regional rail service and Toronto Transit Commission buses and streetcars, and the multimodal transit hub will be a key part of the future subway. HDR worked with Metrolinx to identify elements of the station which could be packaged as early works, reducing risk of future construction delays and ensuring existing transit can operate without interruption. This work will include extending the existing passenger tunnel, building a new north entrance, creating a temporary pedestrian bridge, adding a new north platform and shifting two existing tracks. 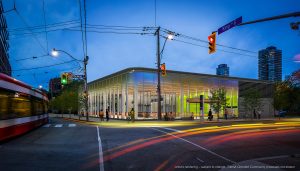 A key challenge was developing a design that allowed for 12-car train operation at the station during all phases of construction. To verify designs, a 4D BIM model was developed to test construction phasing and implementation. The building information model was used during design development to make improvements, identify efficiencies and constraints.

“Our team is proud of the work we’ve done thus far to advance the Ontario Line, whether environmental reviews, detailed design or complex construction phasing,” said HDR Principal Project Manager Doug Jackson, who is leading the technical advisor’s work on the Ontario Line. “With the Exhibition Station groundbreaking, Metrolinx continues to move forward its goal of dramatically improving mobility for Greater Toronto Area residents and connecting neighborhoods in the city.”

Also on March 27, Metrolinx released new renderings of 14 stations along the 15.6-kilometer Ontario Line. The images were created by HDR’s visualization experts, informed by our design and engineering services. They offer residents the first looks at the stations that will serve the Ontario Line and offer new connectivity for neighborhoods across the region.

Expected to accommodate nearly 400,000 daily boardings, the Ontario Line will run from Ontario Place/Exhibition Place through downtown Toronto to the Ontario Science Centre. The new subway line will provide relief to TTC’s Line 1, serve fast-growing areas such as Liberty Village and bring transit to underserviced priority neighborhoods like East York, Thorncliffe Park and Flemingdon Park. When complete, 227,500 more people will be within walking distance of rapid transit, and nearly 50,000 more jobs will be within easy reach of transit (in 45 minutes or less) for GTA residents.