“We were impressed with the project’s innovative and complex engineering. In particular, the technical elements such as the production, testing and selection of the steel for the pipe and the tunnel’s depth of 55 meters below grade.” –Jury

From the October/November print issue of Canadian Consulting Engineer, p. 22 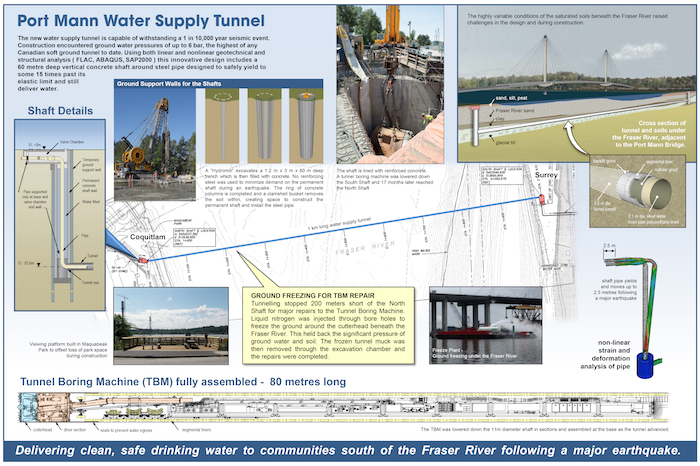 Metro Vancouver (MV) replaced a critical water supply pipe crossing beneath BC’s Fraser River, to increase seismic and scour resilience and meet future demand. The existing crossing, installed in the 1970’s, was damaged by riverbed scour in 1997, had insufficient capacity for population growth, and had a high risk of failure during a low level (1-in-475-year) earthquake.

Ausenco’s team designed a deep tunnel, access shafts, valve chambers, and pipe mains to replace the crossing. The project introduced many industry firsts, including: highest water pressure encountered in Canada; unreinforced ground support walls; and a concrete shaft and pipe main that can yield and significantly deform during an earthquake yet maintain water delivery, allowing downstream communities and economy to recover quickly post-earthquake.

MV’s criteria included water supply following a 1-in-10,000-year earthquake. Ausenco’s team determined the soil behaviour by applying earthquake data from six similar locations around the Pacific Rim to the local soil properties. The analytical models indicated soil movement of some 6m near the surface during the 1 in 10,000 earthquake, imparting enormous forces particularly on the north shaft. Conventional concrete shaft design could not withstand these forces—neither adding the maximum amount of reinforcing steel nor increasing the shaft diameter increased the strength sufficiently. 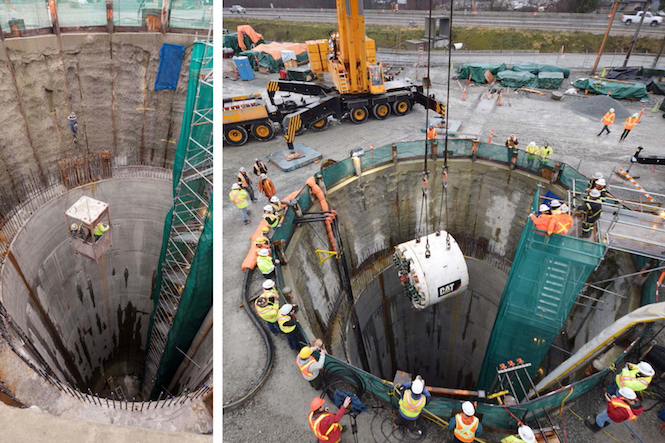 Ausenco designed the 65m deep, 5m ID, 1.5m thick north shaft as a yielding shaft, and the pipe within it to yield also. The 1.6/2.1m diameter, 25mm wall thickness steel pipe is self-supporting from the shaft base to the valve chamber end wall pipe, and is designed to yield to over ten times its initial yield strain. Standard steel grades did not provide the ductility needed at the yielding zones; the team worked closely with suppliers to produce, test, and select specific steel, to ensure it deformed appropriately without buckling. This is the first use of such a shaft and pipe combined as a yielding system.

Ausenco’s design included a unique low friction slip liner to separate the shaft concrete from the ground support walls. This will minimize the potential for composite shaft/wall behaviour that could inhibit flexural yielding. Specialized testing selected a liner with the lowest friction. The team also broke with convention by designing the 80m deep ground support concrete walls with no reinforcing steel, to limit their strength should some composite behaviour occur. 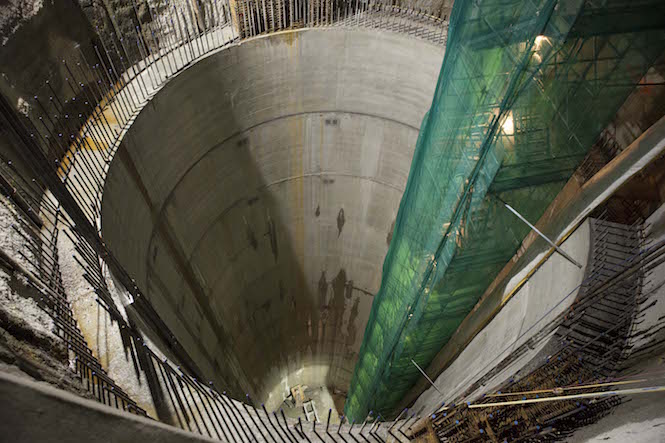 The 3.5m diameter bored tunnel, 1km long, comprised 250mm thick precast concrete segment liner, with internal steel pipe, 2.1m diameter, 25mm thick wall, grout encased. The tunnel crossed beneath an active rail yard and exited in a public park. The rail yard operation was not disrupted, and access around the park and to the public boat launch was maintained throughout construction. The park was returned to its original condition, and the other shaft site was reforested and replanted.

Innovation was required during construction, when ground freezing was implemented from a platform on the river, to allow repairs to a damaged TBM. Ausenco’s team reviewed the contractor’s plans and monitored the work to ensure safe, environmentally acceptable methods were implemented.

Ausenco’s team of environmental specialists prepared an environmental management plan and monitored construction activities; there were no detrimental effects to fish bearing streams nearby, to the Fraser River, nor to the general environment. The work included a fish capture and release program and creek restoration with Coho spawning beds.

The project was completed within the $240M budget.

The tunnel increases both the reliability and capacity of MV’s drinking water transmission to communities south of the Fraser River. Its capacity doubles that of the original crossing, allowing for population growth beyond 2050. Its seismic resilience will provide a stable water supply to allow the community and local economy a return to normal more quickly following a major earthquake.

The Tunnelling Association of Canada awarded the project “Innovative Tunnelling Project of the Year” in 2016, and ACEC-BC granted it an Award of Excellence in 2017. The structural aspects of the design were presented at the International Association for Bridge and Structural Engineering (IABSE) Symposium held in Vancouver, September 2017.