Last fall Montreal had little choice but to release a large quantity of raw sewage into the St. Lawrence River — unleashing a storm of public protest that was largely unfounded. 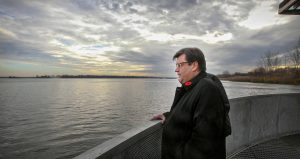 At the end of September last year, the City of Montreal announced a plan to release untreated wastewater directly into the St. Lawrence River to allow repair work and the installation of equipment in a sewage interceptor. The announcement led to much hype in the media and controversy among politicians and citizens. The lessons learned from all this were not so much about the risks of the operation to water quality or its impact on wildlife, but about how socially unacceptable such an operation can be.

Why was the release needed?
Montreal’s 30-kilometre long southeast  wastewater interceptor, collecting water from LaSalle, Lachine, Verdun, and Notre-Dame-de-Grâce,  had to be closed for seven days for city workers to remove hangers. The workers were also building a new snow chute underneath the Bonaventure Expressway near Pointe St-Charles, as well as conducting maintenance and inspection work. The sewer has a diameter ranging from approximately 3.0 to 5.5 metres and is buried as deep as 45 metres underground.
The water usually flows through the sewer at a rate of 12,000 litres a second and this had to be redirected into the river — a volume that was estimated at 8 billion litres for the duration of this operation. The discharge was planned to occur in the fall to minimize environmental risks, i.e. outside the fish spawning period, while nautical activities are reduced and water temperature is low.

Allowed under federal and provincial regulations
Regulatory wise, municipalities from Quebec (ROMAE, Article 8), Canada (CCME), and from the U.S. (Clean Water Act, USEPA) are allowed to release untreated wastewater at a sewage plant or at an overflow location.
In the province of Quebec, such releases — permitted during snow melt, for repair and maintenance work, or following water infiltration due to spring thaws — were identified over 45,000 times in 2013 alone, according to the MAMROT (Ministère des Affaires municipals et Occupation du Territoire)i. In Montreal, the last release of untreated wastewater in the St. Lawrence River was six years ago. Releases of untreated waste water into a body of water have also been reported for cities such as Halifax, Winnipeg, Vancouver, and Toronto.
“Currently in Quebec, the regulation is unclear,” says expert Sarah Dorner, Ph.D., an associate professor at École Polytechnique de Montréal, referring to the duplication of federal and provincial regulations. “Once the Fisheries Act Proposed Regulatory Initiatives(ii) are finalized, responsibilities will be clearer,” she adds.

Political and citizen controversy
The groups and individuals who opposed the Montreal sewage discharge argued they had difficulty conceiving that no other measures could be implemented to prevent the direct release in the river. The City of Montreal, mainly through its mayor, Denis Coderre, maintained from day one that the city had done its homework, there was no other option, and the risk would be worse if the work was postponed as an unplanned overflow may have a detrimental impact on the river. All of this happened during a federal election campaign and a change in government, which are likely to have impacted how the drama played out. See Table 1 above.

Post-mortem on the release
“The post-mortem of this operation is important. Hopefully the public mobilization won’t be forgotten before another release is planned,” says expert Viviane Yargeau, ing., Ph.D., associate professor at McGill University.
As indicated in the table, the sewage release from the southeast interceptor into the St. Lawrence eventually took place in November. On February 3 this year, the results were presented by the City of Montrealiii. The work on the interceptor was completed in 69 hours instead of seven days, and the volume of waste water released into the St. Lawrence River was lower than anticipated: 4.9 billion instead of 8 billion litres.
“I salute the professionalism of our services,” said Mayor Coderre, emphasizing that city workers were on site around the clock.
As predicted by the experts, the monitoring results showed that the environmental effects were local and short term (see Table 2). Water quality in the river was back to normal after 10 days. The impact was limited to a 250-metre corridor up to 10 kilometres downstream.
The most important benefit of the upgrades to the interceptor was a significant recuperation of wastewater discharge capacity; the water level in the interceptor was around 25 cm lower than before the operations. In addition, the inspection work allowed the engineers to identify where to make future interventions.
In light of what occurred last fall, the City of Montreal has made recommendationsiii for future infrastructure interventions. They will acknowledge and include the importance of social acceptability in their communication plans for similar operations.
The issue was not technical, the issue was not professionalism, but a cultural change that must be made,” concluded Mayor Coderre.

Table 2:
Waste Water Release Surveillance Results —
City of Montreal
Quality of River Water
» Physico-chemistry (e.g., suspended matter) and bacteriological variables (e.g., E. coli counts) were back to normal ranges after 4 to 10 days.
» The impact was limited to a 250-m wide corridor and up to 10 km downstream from Montreal Island.
» No genotoxicity was detected.
» No drinking water intake sites were affected.
Quality of Water Discharged
» Using an ecotoxicological test conducted on rainbow trouts as a model, it was concluded that no mortality would be measured on trouts located a few metres from a discharge point, even after four days of exposure.
Quality of the
Sediments and Plants
» Before, during, and after the release, metal concentrations in sediments were below CCME requirements.
» No toxicity was measured on plants.
Shoreline Clean-up
» Few waste residues were identified notably at two discharge points: St-Pierre and McGill.
» Less than 3 m3 of waste was collected.
» No citizen complaints were received.
Industrial Discharge Follow Up
» No anomaly was observed in most of the cases. In the few cases where the standard was exceeded, a conformity plan of action was put
in place.
» No emergency intervention was required.