With a production capacity of 57 tonnes of ozone per day, the plant will be able to treat up to 40 cubic metres of water per second. 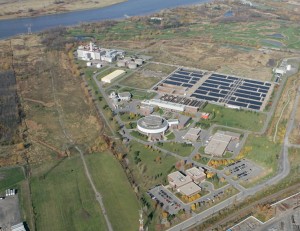 The city of Montreal has committed to installing ozone treatment in its wastewater treatment plant, which is the largest in North America and the third largest in the world

The Jean-R. Marcotte plant is located in Point aux Trembles at the eastern tip of the Island of Montreal. It treats approximately 50% of the sewage waste produced by the province, releasing between 2.5 and 7.6 million litres of wastewater into the St. Lawrence River every day.

On March 23 Mayor Denis Coderre and the Quebec Minister for Municipal Affairs announced that a $99-million contract to supply the ozone treatment equipment had been awarded to Degrémont, a company affiliated with Suez Environnement.

SNC-Lavalin and Réal Paul Architecte were awarded a $12-million contract last October to do the engineering and architecture services for the different buildings required. The additions to the plant include buildings for the production of ozone, of oxygen, for cooling, and a contact building. The original plant dates from 1976-84.

The decision to add ozone disinfection has been in the works since 2007 following public concerns for the environment and calls for the city to improve the quality of the effluent being released into the river. Currently the plant carries out primary treatment, removing solids and some nutrients, but not bacteria, viruses, pharmaceuticals or heavy metals.

The new ozone treatment system, which is scheduled to be completed by 2018, will remove most of these problems, including 99% of fecal coliform and enterococcus bacteria.

According to the city of Montreal fact sheet, the plant’s design flow is 40 cubic metres of water per day, using a capacity of 57 tonnes of ozone per day.  To date, no other ozone disinfection treatment plant in the world has such a capacity.