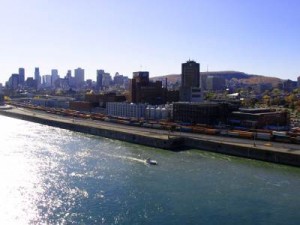 Owing to the demolition of part of the Bonaventure Expressway, the city of Montreal has decided it must temporarily close a sewer interceptor and divert a week’s worth of sewage overflow into the St. Lawrence River.

The decision to release an expected 8 billion litres of wastewater raised an outcry in the city. The Opposition parties in the Quebec National Assembly called on the Quebec Minister of Environment, David Heurtel, to resign for approving the sewage dump. As well a petition against the dumping had collected over 50,000 signatures.

Then on Tuesday, October 6, federal Environment Minister Leona Aglukkaq asked the Mayor of the city to hold off on the release until further information was available as they were concerned about the possible impacts on fish, whales and recreation activities.  The release requires Environment Canada approval.

An article in the Montreal Gazette on October 6 said that the city has to shut one-third of its wastewater collector system into the river in order to dry out a 30-kilometre stretch of the southeast sewage collection system. The interceptor was due to be closed on October 18 for roughly a week.

Mayor Denis Coderre has said the city has no choice but to divert the sewage and poins out that the practice had been done twice previously in 2003 and 2007. City officials argued as well that the release will not have a major impact because the wastewater flow is expected to be around 13 cubic metres a second, easily diluted by the St. Lawrence flow volume which is so much larger at 6,000-7,000 cubic metres a second. Officials also pointed out that municipalities downstream all treat their water so there would be no danger.

The International Joint Commission, which is a U.S.-Canada organization charged with protecting the Great Lakes and St. Lawrence, received a letter from New York Senator Patty Ritchie expressing concerns. She said that a sewage release on that scale set a poor precedent.

To build a temporary interceptor for the Montreal system would have cost $1 billion.

If approved, the sewage will be released through 26 outfalls along the Island of Montreal shoreline from Pointe-aux-Trembles in the east to LaSalle in the west.

Few large cities still release raw sewage into waterways, although it does happen on occasion when plants break down. Victoria on Vancouver Island releases sewage into the ocean after only primary treatment, although plans are afoot to build secondary treatment platns.

To read an October 6 article in the Montreal Gazette, click here.

To read an October 6 article in CBC Montreal, click here.