Communities are often worried about odours emanating from wastewater treatment plants in their backyards, but standards for establishing reasonable odour levels are only just being developed in western Canada. 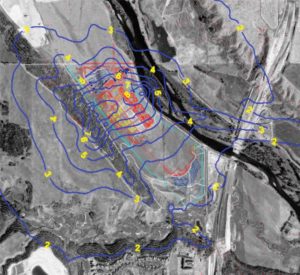 When a western Canadian city conducted a public survey about a potential site for a wastewater treatment plant, more than 65 per cent of the respondents in residential areas nearby were most concerned about possible odours from the facility. Odour concerns can dwarf potential social and environmental considerations when communities are anxious about a wastewater treatment plant being built in their backyard. Nonetheless, regulatory agencies responsible for the approval and regulation of these plants have struggled to establish minimum performance levels that the facilities must meet to be considered “good neighbours.”

Odour regulation in western Canada
Of the four western provinces, only Manitoba has generally applied standards for limiting odour emissions. An odour nuisance is considered to have occurred, “if the odour, smell or aroma is the subject of at least five written complaints received by the Director [of Conservation and Water Stewardship] within a 90-day period, from five different persons not living in the same household.”
In Alberta, the Director of Environment and Parks has power to issue an environmental protection order for a substance or thing causing an offensive odour under the Environmental Protection and Enhancement Act. But the regulations do not define an “offensive odour,” nor do Alberta’s Ambient Air Quality Objectives and Guidelines specify or define offensive odours. However, an objective for hydrogen sulphide has been stated.
Similarly, British Columbia has legislation to prescribe nuisances, but no specific odour limits have been established.
Saskatchewan has recently developed odour control criteria and is working toward establishing regulations that set reasonable odour limits at wastewater treatment plant boundaries, while being economically achievable (see end of article).
Also, a recent Request for Proposal for a new wastewater treatment plant in Regina stipulated control on odour — requiring the design to achieve odour levels less than 5 D/T (dilutions to threshold) at the property line, based on an hourly average and a compliance level of 99.5 per cent. Non-compliance was based on complaint criteria, similar to those noted for Manitoba. Although these standards are relatively comprehensive, they were self-imposed by Regina to address potential public concerns.

Engineering measurement of odours
The standard regulatory definition of odours in jurisdictions such as in California focuses on the detrimental effect that a nuisance odour can have on human activities. The engineering measurement of odour is generally based on the number of dilutions to which an air sample must be subjected before the odour is undetectable by at least half of a group of unbiased observers — a measurement expressed as D/T or odour units per unit volume (OU/m3).
Odours from wastewater treatment facilities are generally caused by hydrogen sulphide, other reduced sulphur compounds, or volatile organics. Odour levels of the air can be measured at a location by taking a sample and shipping it to an accredited laboratory, or by using devices that measure surrogate compounds. However, due to the difficulty of collecting field measurements, capturing odour levels surrounding a specific location is best performed by air dispersion modeling.

The role of air dispersion modeling
Various computer-based models can be used for modeling odour emissions in the vicinity of a source. AERMOD and CalPUFF are two models most commonly adopted and accepted by regulatory agencies. Input to these models includes odour emission rates from various processes estimated on the basis of site specific sampling, literature sources (for example, McKinley,  Odor Threshold Emission Factors for Common WWTP Processes, WEF/AWMA Odors and Air Emission Conference, 2008), topographical information from the site and surrounding area, and local meteorological information. The models can be used to determine the incidence of odour levels for one hour time increments through a period (typically a year) at a series of locations (nodes) on the property and in the vicinity of the emitter. This data is generally plotted as a series of isopleths (lines of equal odour) based on the probability of that level of odour occurring.
For instance, predicted odour levels based on one hour intervals and 99.99 percentile values (worst case hour in any year) for Calgary’s Pine Creek Wastewater Treatment Plant are shown in Figure 1. The illustrated data represents a case where a substantial level of odour mitigation was incorporated in the plant design (see page 25).

Establishing acceptable odour levels
While odour concentrations are important, the averaging period and compliance level are also critical characteristics in air dispersion modeling results. Regulatory agencies are most concerned about the definition of the combination of these three parameters to provide adequate protection against nuisance odours at the plant boundary, and at the nearest receptor if there is a buffer zone. Because the public has differing sensitivities to odours, both to their concentration and frequency, deriving adequate protection is a difficult task.
Generally, the engineering community accepts complaints are improbable if odour concentrations are less than 5 OU/m3, based on one hour averaging periods and at least 98.5 percentile compliance (United Utilities UK, Odour Control and Removal Asset Standard, 2015). However, some references suggest that because of the offensive nature of wastewater treatment plants, the odour levels should be as low as 1 OU/m3 to eliminate the possibility of complaints (Scottish Environmental Protection Agency, Odour Guidance, 2010). These recommended limits are based on the assumption of relatively sensitive neighbours in close proximity to the plant.
Capital and operating costs for odour control and mitigation increase exponentially as standards become more stringent. At the relatively new Brightwater wastewater treatment plant in Seattle, due to the vociferous input from nearby residents, the plant was designed to achieve odour levels below 1 OU/m3 at the plant boundary. The majority of the plant’s treatment processes are contained, and contaminated air is exhausted through two or three stage treatment systems, depending on the contamination levels of the source. The total horsepower of the fans used for the contaminated air conveyance system exceeds the horsepower of the plant’s aeration system, which is generally the largest energy consumer at a wastewater treatment plant.
Therefore, any regulations promulgated to address potential odour issues must strike a balance between perceived acceptable neighbourhood odour impacts and the costs associated with the consequent level of control at the plant.

Future directions in western Canada odour regulations
As mentioned above, Saskatchewan recently developed odour control criteria and is working toward establishing regulations that set reasonable odour limits at wastewater treatment plant boundaries, while being economically achievable.
Recently, it was suggested by a provincial task force (I Maqsood, Saskatchewan’s Air Modelling and Odour Guidelines, 2014), that the guideline for urban residential areas should be 1 OU/m3, based on a one hour averaging time and 99.5 per cent level of compliance. For urban commercial zones, or mixed commercial/residential zones, 2 OU/m3 was suggested, and for industrial or restricted business zones and rural zones with mixed utilization, 4 OU/m3 was advanced as the guideline.
These stringent guidelines would be difficult for many existing wastewater treatment plants to achieve without additional odour containment and treatment processes. Before these criteria evolve into hard and fast standards in Saskatchewan and the rest of western Canada, it is expected that their economic feasibility will be tested along with the resultant benefits to the community.

Pine Creek Wastewater Treatment Plant Odour Control
When the first stage of Calgary’s Pine Creek Wastewater Treatment Plant was completed in 2009, the nearest residence was more than 1 km away. However, as the adjacent lands were developed and neighbours were inevitable, odour containment and treatment systems were incorporated in the plant design to lower odour emissions to less than 3 OU/m3.
About 7,500 m3/h of odourous air from the influent pump station and the headworks is collected and treated in a packaged biofilter. A similar system was installed to handle about 1,200 m3/h odorous air from the secondary sludge thickening facility.
For the most severe odours associated with the primary clarifiers, raw sewage and primary effluent channels, and the primary sludge fermenters, a two stage system was employed. The first stage consists of a packed bed wet scrubber, and the second stage is comprised of a large biofilter. Since plant start-up, the three components of the treatment system have effectively managed the odour from the Pine Creek plant and no complaints have been received related to its operation.

Kim Fries, P.Eng., is a principal engineer and Canadian lead for wastewater infrastructure at CH2M. He is based in Calgary.