After a landslide fell on a CN rail line in the steep mountains of B.C., Klohn Crippen Berger was asked to analyze the risks of potential further rock falls and design new protective structures for the track. 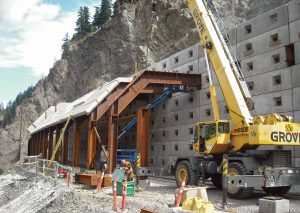 On November 25, 2012 a 53,000 m3 rock landslide occurred along the Canadian National Railway track between Lytton and Boston Bar, in the Coastal Mountains of B.C.
The debris covered 70 metres of the track and was up to 10 metres deep. It caused a four-day service disruption on the line, which is a single track mainline used by both CP and CN for all their westbound traffic from Kamloops to Vancouver. The service disruption on this line caused significant business losses to both railways.
The rock also destroyed a 21-m long protective structure known as a “rock shed” over the track.
After the debris was cleared away, there was still a risk of rock falling from the disturbed rock slope. CN therefore retained Klohn Crippen Berger (KCB) to characterize and assess the hazards and then recommend passive measures to protect the tracks. To complicate matters, the new protective structures had to be constructed while train service continued on the line.
KCB designed and constructed two remediation structures. First a “mesh attenuation curtain” (MAC) was installed to act as a barrier in the short term. It was to protect the construction works at the site from rock falls.
Second, KCB designed a long “composite barrier wall/rock shed structure” to permanently protect the track. The structure consists of a retaining wall anchored into the mountainside and a concrete roof structure. The roof structure is supported on steel frames and micropiles anchored into the bedrock. The project was completed in spring 2014.

Mesh attenuation curtain
Particularly hazardous conditions were experienced by the surveying and engineering team as they were scaling the steep rock face to do the initial site investigations during the summer of 2013. A gully had formed from wind erosion in the dry overburden above the head scarp of the landslide, generating constant ravelling and loose material falling from above.
Due to these unsafe working conditions, the initial plan to install a dynamic rockfall barrier (one that moves and dissipates energy when hit) to protect the site during construction of the wall-shed structure had to be abandoned as it required work on the slope. An alternative was required that would not only protect the work site at track level, but also was something that itself could be installed safely. The solution was a mesh attenuation curtain (MAC) draped across the active slope.
The curtain consists of a Geobrugg TECCO high tensile steel mesh, connected with hooks to a 25-mm support cable. Based on our measurements of rock block sizes on the site and dynamic rock fall analyses, we estimated a design impact load on the system of 250 kN.
The support cable is suspended approximately 200 metres across the site and attached by a system of anchors into the rock. The anchor system is arranged to allow the load to be evenly distributed to each anchor. Pulleys are installed at locations where the support cable changes direction.

Barrier wall and rock shed
The composite barrier wall/rock shed structure consists of a barrier wall with backfill to absorb the impact of falling rock’s normal and drag forces, and a sloped rock shed to guide the debris flow over the track and down to the talus slope below.
The modular components of both the wall and shed are tied back to the rock slope with rock anchors. The wall and shed components are designed to act independently as structures. In this way, the load strains on the barrier wall are not transferred to the rock shed.
The design uses modular components in order to minimize disruption to the railway traffic during construction. Modular precast components were used for the retaining wall, rock shed concrete roof panels and rock shed footings. The rock shed concrete roof panels were fastened to prefabricated steel frames.
On the down-slope side of the rock shed the concrete footings, supporting the steel frames, are supported by reinforced grouted micro-piles which extend down through the talus and are founded in heavily fractured bedrock.

Modelling a rockslide
KCB’s investigations showed that the greatest threat to the railway track was a potential retrogressive failure of the remaining rock mass, i.e. failure would initiate as a rockslide along a stepped failure surface and turn into a rock avalanche.
In order to ascertain the design parameters for the protection structures, KCB used innovative rock slope characterization techniques, including terrestrial LiDAR.
The rockslide modeling was performed using finite element modeling. A discrete fracture network was incorporated in the finite element analysis in order to model the breaking of intact rock bridges between the stepped geometry of the failure surface, and to provide estimations of potential future rockslide volumes.
These volumes were incorporated in DAN-W software to create dynamic run-out simulations of a rock avalanche and thereby derive the impact loads for the design of the new protection structure. The model was calibrated by finding best-fit frictional rheology (i.e. pre-rockslide geometry and strength characteristics) for back-analysis of the 2012 rockslide. A modified version of the pseudo-three-dimensional run-out analysis software DAN-W was used, allowing output of normal and shear stresses at the base of a sliding frictional mass. This was the first use of DAN-W for such a purpose.