The terminal's surface doubled in size. 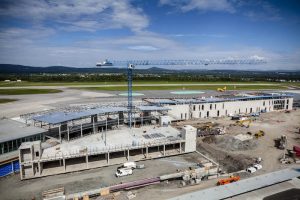 Dubbed ‘YQB 2018,’ the project involved a $277-million investment to support the airport’s continued growth, energy efficiency and sustainable redevelopment, while also focusing on the passenger experience, to better meet the requirements of international air traffic.

Both Stantec and SNC-Lavalin integrated engineering and design by applying the building information modelling (BIM) approach through all phases of the project’s life cycle, which was apparently a first for Quebec.

Stantec’s team found the BIM approach helped identify planning anomalies, avoid on-site problems and accommodate a tight schedule. Among the technical challenges, for example, was developing an awning along the terminal’s façade to protect travellers from inclement weather.

The resulting awning—a 7 x 80-m glass wall—was suspended as a cantilever structure from the roof, avoiding the installation of posts that could interfere with pedestrian traffic flow, and was engineered to withstand the effects of wind, ice and thermal and seismic stresses.

The new terminal’s irregular structure, with curved walls and roof, also posed challenges. The inside spaces of the luggage carousels were used for bracings that also serve as mechanical shafts and conceal steel assemblies that transfer stresses from the roof.

BIM was also used to integrate the new terminal into the airport’s existing architecture. Autodesk Revit software facilitated design co-ordination and, subsequently, contruction work, as contractors used the 3-D models for their own plans.

SNC-Lavalin’s team focused on the energy-efficiency goals, designing electrical and mechanical systems to minimize consumption. The existing buidling’s heating systems had to be maintained at high temperatures during very cold weather, but the basic principle for the new terminal’s design was low-temperature water heating and heat recovery.

A new thermal plant—including a geothermal exchanger with 60 wells, each drilled to a depth opf 168 m—was installed to provide not only heating and cooling, but also an emergency power supply. A new mechanical room houses most ventilation systems, as well as heating and cooling pumps for secondary systems.

More than 43 km of radiant piping was installed under the floors of common areas, along with change-over diffusers along the perimeter to heat windows, prevent condensation and improve travellers’ comfort. Two of these piping systems feed the existing and new systems.

Besides the condensation boilers, the main energy-efficiency measures included variable-frequency drives (VFDs) for all ventilation units and most pumps, fresh air intake based on oxygen detection, LED lighting with luminosity detectors in large, open areas and heat recovery from chillers and from waste air by using thermal wheels. In particular, SNC explains the project’s extensive use of ‘smart valves’ with integrated flow meters is a first in Quebec.

In February 2019, YQB showcased the results when it became the first Canadian venue ever to host Routes America, an international air transportation industry event. And now, the expanded terminal is ready to welcome an estimated 2 million passengers in 2020.