A new academic building actively demonstrates technologies in the same engineering disciplines for which its students are being prepared. 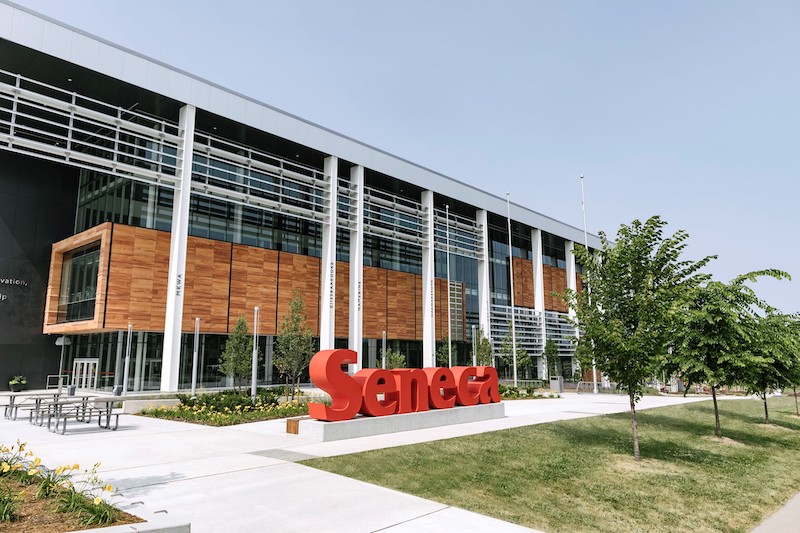 The 47.4-m2 (510-sf) curtain wall is part of the building’s southwest-facing façade. It comprises 18 PV glass panels, incorporating Onyx Solar’s amorphous silicon (a-Si) technology, and provides 20% transparency, so building occupants can see through the thermally and acoustically insulated glass units (IGUs) as though they were merely shaded to filter out infrared (IR) and ultraviolet (UV) radiation—which they also do.

Approved by Underwriters Laboratories Canada (ULC) and Ontario’s Electrical Safety Authority (ESA), the feature window will generate clean, free electricity to help offset some of the facility’s operational costs. That said, these amounts of electricity will be relatively small: 1.2 kW DC, 15 kW AC, with the peak estimated at 1.3 kW DC.

“It was expensive,” explains Angelo Miranda, Seneca’s director of major capital projects, “but we wanted to showcase this technology and what it can do.” 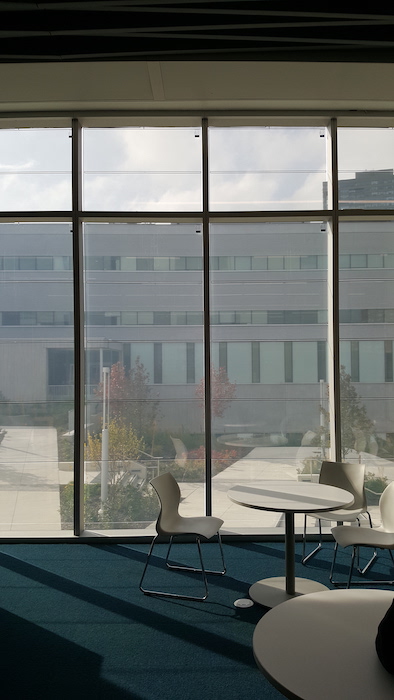 By way of comparison, CITE’s more traditional rooftop PV panels will generate an estimated 164 kW DC, 133.3 kW AC. This is forecast to save Seneca $17,000 each year on its electric bills.

Perhaps fittingly, both installations will help the college ‘walk the talk’ for the new 25,455-m2 (274,000-sf) building’s cohort of students in applied science and engineering technology programs, which span civil, mechanical and environmental engineering, among other disciplines. That is to say, CITE can actively demonstrate new technologies in the very industries for which its students are being prepared.

“I’m excited for all the ideas and partnerships that will develop here and benefit our students and the community,” said Ranjan Bhattacharya, dean of the faculty of applied science and engineering technology, when CITE held its official grand opening in September 2019.

The five-storey building—with three storeys of academic spaces and two for administrative offices—is the largest construction project in Seneca’s history. As such, it is also a major component of the college’s vision for its immediate and long-term future.

Students started arriving in January 2019, followed by a ‘soft opening’ in February, but many more of them, along with staff, will be relocated throughout 2020 to benefit from closer collaboration and interdepartmental synergies.

By way of example, Seneca recently closed its Jane Street campus in the city’s west end and moved its tool-and-die, computer numerical control (CNC), mould making and other metal machining systems to CITE, where they are now part of the advanced machining program. The building’s many specialized labs also feature robotics, mechatronics, motors and process control.

Open ceilings let students view the building’s own workings, including HVAC and electrical systems, complemented by acoustic baffles and carpeting to reduce echoes. Collaboration spaces that bring students and entrepreneurs together feature raised floors and movable furniture to accommodate not just today’s, but also tomorrow’s, data cabling and wiring. Wi-Fi is ubiquitous via overhead access points, except in an information and communications technology (ICT) lab where special Wi-Fi-blocking tapes and paints were be used to prevent signal entry, since the students there learn about hacking a training server to improve data security measures.

“Five of our specialized ICT labs need their own internal networks to support hundreds of cable drops,” explains Hooman Aboutalebi, Seneca’s manager of design and construction for major capital projects.

The administrative floors are still under construction. They will be occupied in 2020 when employees are relocated from Seneca’s Markham campus. This will mark the first time all of the college’s administrative departments will be united in one location.

Given the college is named after one of North America’s five Iroquois tribes, it is also fitting that CITE features many Indigenous elements.

At the grand opening, artist Joseph Sagaj introduced guests to his signature piece, ‘Circle of Indigenous Knowledge,’ a terrazzo medallion inset in the floor of the building’s main lobby and serving as its central meeting point.

“The footprints of the clans of the animals and birds incorporated into the medallion serve as a metaphor to invite people to walk with us in the circle of life and unity,” he explained. “I wanted to make it inclusive for everyone.”

Constructed by Franklin Terrazzo, the medallion measures 10 m (32.8 ft) across and features a turtle in its centre—referencing Turtle Island, which to many Indigenous peoples represents the North American continent. It won the Project of the Year award for 2019 from the Terrazzo, Tile and Marble Association of Canada (TTMAC).

Just outside the lobby, the western front entrance features a four-storey tall graphic by Bruce Mau Design (BMD), recreating the signature page and map from the 1787 Toronto Purchase land deal between the Mississaugas of the New Credit and the British crown. At the opposite end, the eastern entrance wall displays a map of the universe, representing technological progress since the treaty was signed. And between those entrances, 13 columns lining the building’s front façade are emblazoned with the names of the 13 moons in the Indigenous lunar cycle.

The building’s bulkheads display a bathymetric (similar to topographic, but for water) map of the bottom of Lake Ontario to represent the historic importance of the Great Lakes to the Seneca and other Indigenous peoples. At night, an LED fixture in the third-floor student lounge projects images of the aurora borealis onto an acrylic screen to highlight the importance of the Northern Lights to Indigenous culture and mythology.

The concept extends throughout the academic floors with eight graphic elements.

From completion to certification

Design and construction began in 2016 for the $100-million CITE, which was substantially completed by the end of 2018. Perkins + Will Architects Canada were the prime consultants for and designers of the building, while Smith + Andersen served as mechanical and electrical engineers, Read Jones Christoffersen (RJC) was the structural engineering consultant and WSP was the civil engineering consultant.

Seneca is now seeking LEED Gold certification for CITE, based on such elements as LED illumination, a demand-controlled HVAC system (which uses much less energy than a traditional system), naturalized landscaping (which collects and recirculates rainwater for irrigation and reduces the need for energy-consuming maintenance) and, of course, the two solar energy installations.