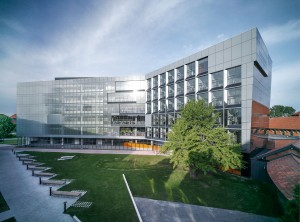 The American Society of Heating, Refrigerating and Air-Conditioning Engineers (ASHRAE) has announced the winners of this year’s Technology Awards.

Once gain, a Quebec firm is among the select few, who will be presented with their awards at the ASHRAE 2016 Winter Conference to be held January 23-27 in Orlando, Florida.

The building is named after Anne-Marie Edward, a student at John Abbot who had been pursuing an engineering degree when she became a victim of the 1989 shooting at Ecole Polytechnique.

It maximizes resources through reuse and recuperation, as follows:

ASHRAE’s citation notes that laboratory ventilation requirements and large glazing surfaces can have devastating effects on energy efficiency. Nonetheless, the building’s actual energy use is 45% lower than the baseline case and 10% lower than the simulation.