Marg Latham, P.Eng, CMC, is the first consulting engineer to be named chair of the Canadian Centre for Women in Science, Engineering, Trades and Technology.

This year, Marg Latham, P.Eng, CMC, became the first consulting engineer to be named chair of the Canadian Centre for Women in Science, Engineering, Trades and Technology (WinSETT)—and only the second person to hold the position to date, succeeding founding chair Margaret-Ann Armour, a chemist and associate dean of diversity for the University of Alberta, who passed away in May.

We spoke with Latham about how the WinSETT Centre has evolved over time and her vision for its future. 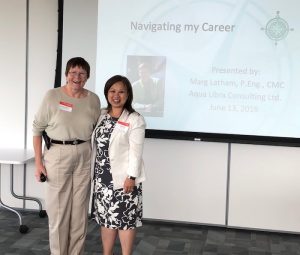 Why and how did you pursue civil engineering as a career?

It might have seemed predestined. In high school, I was good at math, physics and chemistry. My brother, who entered engineering ahead of me, encouraged me to consider it. My chemistry teacher and a guidance counsellor also encouraged me.

However, when I went to a career day and spoke to a civil engineer, he indicated the industry was too ‘rough and tough’ and a woman would not be able to handle it! Back then, women were really not supported in choosing engineering as a career.

I grew up in a small town, Brockville, Ont., and not a lot of kids in my graduating year (1970) went on to university. I applied to the Universities of Toronto and Waterloo and ended up at Queen’s in Kingston.

I had considered studying architecture instead, but I wasn’t artistic enough. I could envision bridges and other infrastructure projects in practical terms, using math formulas, etc.

The first year of my degree was common to all disciplines in engineering. There were eight women in all the first-year class—and that was a lot back then—but in my second year, I was the only woman in a class of 45 in civil engineering. I didn’t see a big uptake during my time at Queen’s.

After coming out of university with my B.Sc. in civil engineering, I spent the first 20 years of my career in construction. Halfway through that period, I joined UMA Group, a consulting engineering firm that went on to be bought by AECOM in 2004. I worked on projects in Ontario, Manitoba and British Columbia, moving to West Vancouver and eventually to North Saanich on Vancouver Island.

Over time, I moved out of construction and focused more on UMA’s engineering operations. I stayed with their leadership team until 2009, then founded my own business, Aqua Libra Consulting, in 2010. I continue to provide management consulting, primarily for engineering organizations, with a focus on professional practice and quality management.

Tell us about the founding of WinSETT.

It evolved out of the Canadian Coalition of Women in Engineering, Science, Trades and Technology (CCWEST), following a series of focus groups that were held across the country, asking what we needed. I participated in one of those groups, around 2007.

WinSETT was officially launched at the CCWEST Conference in Winnipeg in 2010. It started small, offering one daylong workshop. Over the next decade, that grew to six workshops, all designed to give women tools to help them thrive in science, engineering, trades and technology workplaces and, at the same time, the group worked with researchers and industry partners to change those workplaces’ culture, which was found to be one of the primary reasons women were leaving engineering.

When did you join and how did you take part?

Margaret-Ann reached out to me in 2012, asking if I would join the volunteer working board. I was delighted to. The board members were all across the country, ‘meeting’ every other month via conference call. In 2016, I volunteered to serve as vice-chair.

Margaret-Ann was an amazingly accomplished chemist, whose manual on disposing of toxic chemicals is still used in labs around the world today. Having founded Women in Scholarship, Engineering, Science and Technology (WISEST) at the University of Alberta in 1981, she was Canada’s premier ambassador for women in science and engineering for nearly 40 years.

She worked tirelessly at WinSETT and understood women are more interested in the sciences when they can see they are making a difference. Hers are very big shoes to fill, but I have a phenomenal board and team behind me.

What is your vision for WinSETT’s future?

The centre’s vision is of a world where women to participate fully in science, engineering, trades and technology.

We need to continue to position women for success by (a) providing our leadership program, (b) influencing and improving our industries’ workplace culture, to make it more respectful and inclusive, (c) serving as a national hub for information about women in these workplaces and (d) celebrating women in these fields, to provide role models for girls and young women making career choices.

While we are well-known among women in the field, we want to improve awareness across the consulting engineering industry in general. Also, one of our immediate goals is to revamp our website to make our information more publicly available. It is key to our strategy.

What message do you want to convey to that industry?

We know cultural change is hard to do, but we can help you create a more respectful environment for women professionals. Also, it has been shown that getting more women onto your board will help your organization become more innovative, make better, more ethical decisions and improve the bottom line!