The Minto flywheel project in Ontario is a “mechanical battery” that stores electricity in the form of kinetic energy — one ingenious solution to the search for the “holy grail” of the electricity system. 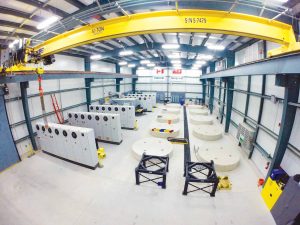 Electricity systems have undergone a transformation over the last century, from the first basic grids to the highly complex, interconnected and digital power systems of today. Ensuring there is enough electricity to meet demand on a second-to-second basis is an ongoing process. Today, the task is made more difficult because of the growing penetration of intermittent renewable generation, distributed energy resources, and increasingly sensitive energy infrastructure.
Innovative energy storage technologies are often referred to as the “holy grail” of the electricity sector. These emerging storage resources are adding much needed flexibility, allowing operators to maximize the use of existing infrastructure. Energy storage allows for the withdrawal and reinjection of electricity on demand to better optimize the flow of electricity throughout the power system. Furthermore, these technologies are generally fuel-free and can even displace the need for greenhouse gas-emitting energy generators.
Large utility-scale and smaller distributed energy storage resources are being deployed at an increasing rate on electricity grids around the world. There are a variety of commercially viable technologies, each with unique operational characteristics and niche applications.
Ontario’s Independent Electricity System Operator (IESO) has procured a suite of energy storage technologies for both short and long duration utility-scale applications. The technologies include flywheels, solid-state batteries, flow-batteries, and compressed air energy storage (CAES). They can provide a variety of key services to the grid, for example smoothing out intermittent renewable generation, relieving congestion in transmission and distribution, storing surplus off-peak energy for use during peak hours, and providing reliability-based ancillary services.

Flywheel Energy Storage — NRStor
Minto Flywheel Project
In 2012, the IESO selected NRStor to develop a 2 MW flywheel project through a competitive RFP process. Located in Wellington County, southern Ontario, and commissioned in July 2014, the Minto project was the first grid-connected commercial flywheel facility in Canada. NRStor, the owner and developer, partnered with Temporal Power, Canadian manufacturer of the world’s highest energy flywheels, to deliver the project.
A flywheel is essentially a mechanical battery that stores electricity in the form of kinetic energy. Electricity is used to operate a motor that accelerates a rotating steel mass to a high speed. Because the flywheel is spinning in a vacuum there is no air drag and the rotational energy can be “stored” for relatively long periods of time with minimal parasitic losses. The flywheel’s momentum can then be harnessed to generate electricity on demand.
Temporal Power’s flywheel technology provides high-performance energy storage with high power, fast response, and unlimited cycling capacity. Each flywheel weighs about 12,000 pounds and can spin at speeds in excess of 11,000 RPM. The basic design allows for up to 15 minutes of output at full load, and the units can discharge and recharge to full capacity at an extremely high rate repeatedly (see sidebar next page).
HH Angus (Angus Power) provided project management during development and construction. Angus Power was asked to review the project’s interconnection and develop a robust protection and control logic.
The Minto project increases the reliability of the system by providing regulation service, matching system generation to total system load, and helping to correct variations in power system frequency. In Ontario, this service has primarily been provided by hydroelectric resources, with other jurisdictions relying on gas generation. Flywheels are ideally suited to provide this service over traditional resources because of their unlimited cycle life, fast response time and flexibility (their ability to act as both a load and a generator).
Annette Verschuren, NRStor’s chair and chief executive officer, says: “Flywheels are a game-changing technology that can significantly optimize the performance of our electricity system. We see enormous opportunity for flywheel energy storage in Canada.”

Geoff Osborne is an associate at NRStor, based in Toronto. E-mail gosborne@nrstor.com