Infrared thermography is a powerful tool for discovering where energy is leaking from building roofs and wall assemblies. 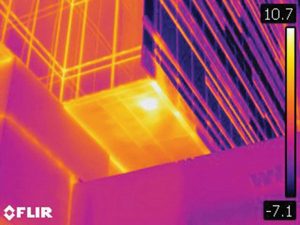 Commercial buildings are complicated things. With advances in materials, systems and the desire to stretch our ability to create functional, sustainable, energy efficient and aesthetically pleasing enclosures, the need to “join the pieces well” has also intensified.
Infrared thermography, when used by those with an understanding of materials, system design and construction, can efficiently identify deficiencies that might otherwise go undetected.

What it is
Infrared thermography is a method used to detect infrared energy emitted from the surface of objects within a field of view. Thermographic cameras can detect radiation in the long-infrared range of the electromagnetic spectrum (9,000–14,000 nano­­meters) and convert this data into visible images. Infrared radiation is produced by any object at a temperature above absolute zero. As an object’s surface temperature increases, the amount of infrared radiation also increases. The distribution of surface radiation is displayed as a visible image. These visible images are called thermo­grams.
Current technology allows for the measurement of small increments in surface temperature. The results can be correlated to the performance of building materials and complex building envelope systems.

Evolution since the 1960s
The first investigations into the use of infrared thermography as a diagnostic tool for building envelope problems were undertaken in 1968 in Sweden. From the first trials to today the technology has continued to advance. Early models of commercially adapted infrared cameras were bulky, often involved the use of liquid nitrogen to provide a stable reference for calibration, and required the operator to synchronize a specially modified polaroid camera with the “image flicker” on the provided cathode ray tube display. The cost of the equipment was also prohibitive, and as a result the technology was held by the few who could afford the investment.
Today it is possible to purchase infrared cameras that are capable of serving many commercial, medical and industrial applications for a few hundred dollars. The equipment is relatively simple to use and is becoming increasingly more portable. As interest has grown in applying this technology to a variety of uses, the opportunities to obtain training to become proficient in the use of the equipment have also increased.
Within the last two years unmanned aerial platforms, commonly referred to as “drones” have been gaining attention. Currently in Canada there are a few commercial operators who have married infrared thermography with drones, and this combination shows great promise. By mounting high technology infrared cameras to stable, unmanned aerial platforms, it is now possible to remotely program a survey of an entire building elevation, from ground to top. Similarly, entire complexes can have their roofing aerially “mapped.”

Building envelope assurance
In Canada infrared thermography has become a commonly accepted technique for providing early assurance to owners, designers and constructors that the integrity of the building envelope as it was conceived and designed has been achieved in its completion. On most major commercial building construction projects, “infrared scans” are being specified as a means of validating the performance of the building envelope.
Infrared scanning is ideally undertaken at the completion of the air barrier system. At this stage in the construction sequence, if defects in the air barrier can be identified, the sub-trades may still be on site, repairs can be more efficiently completed, and then finishes can be applied with confidence.
On older buildings, infrared thermography is used to reveal symptoms of larger concerns that are hidden from plain sight. As a first diagnostic approach, the use of infrared thermography can provide the investigator with the ability to map trends and more efficiently source the root concern.

Dealing with weather
Infrared scans are typically performed from the exterior of the building during the hours of darkness. In order to properly test the envelope’s integrity, the building enclosure must be positively pressurized in advance. It is desirable to achieve a minimum of 15 Pascals of positive air pressure at the ground level. At this minimum pressure, an exterior infrared scan should be able to detect small voids and gaps that might exist in the air barrier system. Additionally, a minimum temperature differential of 20 degrees Celsius between the interior side and exterior side of the envelope should be provided. Scans are normally done during cooler weather, but raising the indoor temperature enables testing to be undertaken in the early summer months.
Infrared scans should not be undertaken during conditions of high wind velocity (greater than 15 km/hr) to avoid “scrubbing” of minor air leak signatures. Buildings with temperature-absorbing claddings should also not be scanned immediately following an intensely sunny day, as the infrared will be “blinded” by the effects of solar loading.
When all the environmental conditions are aligned, infrared thermography is able to detect the following: un-controlled air leakage signatures, locations of thermal bridging, insulation faults, and locations of entrapped moisture. The technology can also be used to determine whether repairs in the envelope have been successful. Examples of anomalies that are commonly detected are shown in the images on page 30.

Up on the roof
Infrared thermography has been used extensively across Canada to identify the presence of entrapped moisture within conventionally designed roofing assemblies (i.e. waterproofing is located on the exterior side of the thermal barrier). Infrared thermography can be used to survey large expansive roof areas in a relatively short amount of time.
In the colder months, roof membranes that have become damaged will leak and allow surface moisture to enter the thermal barrier insulation layer. The thermal barrier might also be compromised by humidified air leaking from the interior. Once the insulation becomes saturated, it loses its thermal resistance properties. Infrared thermography can detect where moisture has become entrapped in the roofing assembly, as these locations will display a greater relative surface temperature than the areas that are sound since heat energy from the interior is able to flow through the damaged insulation.
In the warmer months, infrared scans performed on roofing assemblies are undertaken using the principle of solar gain. On warm sunny days the roof assembly absorbs the radiant energy. At sunset, the roof assembly “gives back” the acquired solar gain. Areas that have become compromised by moisture or otherwise damaged will tend to hold the solar gain longer than the areas of sound roofing.
In sum, infrared thermography, in conjunction with other verification methods, is an efficient means to determine whether a roof can be repaired or is in need of replacement. With drones and other technological advances, the technology will become ever more useful to consultants working in the building envelope sector. cce

Gord Rajewski is a registered engineering technologist (ASET) and a certified level I & II thermographer, who has completed assignments throughout Canada, parts of the U.S. and in Africa. Based in Edmonton, he is regional director of Williams Engineering Canada for the northern region.