At the heart of the sprawling campus of Sunnybrook Health Sciences Centre in north Toronto, five big chillers are helping to bring stability to Ontario's power grid. 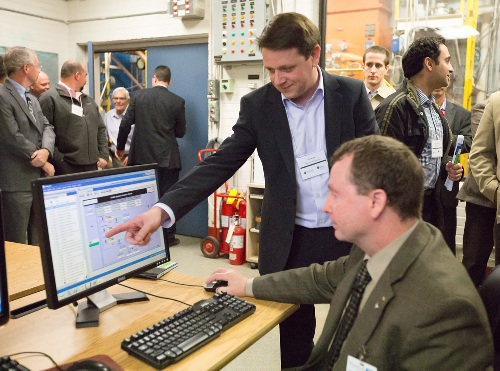 At the heart of the sprawling campus of Sunnybrook Health Sciences Centre in north Toronto, five big chillers are helping to bring stability to Ontario’s power grid.

On October 31, the province’s Independent Electricity System Operator (IESO) launched an initiative that enables the hospital and other large consumers of power such as manufacturing plants, water treatment plants and university campuses to be networked and act a balancing influence on the grid’s power supply.

Dozens of people packed into an auditorium at Sunnybrook for the launch and to hear presentations by Bruce Campbell, president and CEO of IESO and Ron Dizy, president and CEO of ENBALA Power Networks. Enbala is the company that has assembled the various organizations in the Enbala Ontario Grid Balance network. It also provides the network’s smart grid platform, “GoFLEX.” Besides contracting with Sunnybrook, Enbala’s network encompasses big power users such as Collingwood Public Utilities, Walmart, McMaster University, and Atlantic Packaging, which is the province’s biggest electricity user. By aggregating several facilities into a network and automatically fine tuning their power needs second by second in real time, the network fulfils a regulating function on the grid that is normally provided by power utilities.

At Sunnybrook Enbala’s small control panel is mounted on the wall in the central chiller room, communicating between Enbala and the chiller equipment. The IESO continuously sends signals to the Enbala system which monitors the hospital’s power needs. If it determines the hospital can participate in the exchange, then it shifts a small amount of power capacity to the grid. Sometimes the shift is for just a very short period of time, just minutes, but it can be enough to save the IESO from having to buy expensive power from outside the province. The Enbala system will only enlist a user’s power capacity when it will not have any negative impacts on the host facility’s operations. While Sunnybrook uses a total of 7 MW of power, so far the Enbala system is only linked to the chillers. However, the hospital and Enbala are looking at extending the applications.

Campbell and Dizy said that the aggregated network will help the electricity system overcome problems associated with the wide fluctuations in power that occur with solar and wind generation. Campbell suggested that with these kinds of intelligent technologies we are looking at a very different future for the power system: if we can balance the continuing ebb and flow of power between consumers and producers, then we don’t need to build big, expensive centralized power plants.

The initiative — which is at the forefront of smart grid technology — is the result of a request for proposals that IESO made in 2012 to procure up to 10 MW by regulating the grid’s energy demand using alternative technologies. Enbala won a contract to deliver 4 MW of aggregated demand response. Two other contracts that resulted from the RFP relate to energy storage: NRStor and Temporal Power are to deliver regulation service through flywheel technology, while Renewable Energy Systems Canada is developing a battery storage facility.