Across Canada everyone from universities, to utilities, to farmers are finding diverse ways to turn waste organic materials into bioenergy, and so reducing our carbon footprint. 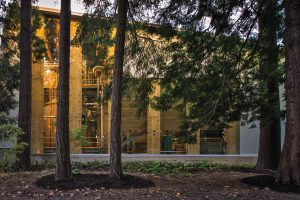 Creating bioenergy using biomass materials is not new in Canada. Industry, particularly in forestry, led the way. But applications for using waste organic matter, whether plant or animal based, are now reaching deeper into the mainstream of energy production. Biomass operations are even finding their way into urban areas, as issues such as airborne particulates and odour are resolved.
The City of Surrey, for example, is in the process of constructing a $68 million plant that will use a fully integrated closed-loop system to handle 115,000 tonnes of residual kitchen and garden waste and convert it into gas that can be used to fuel its fleet of municipal vehicles. The Surrey Organic Biofuel Plant is a public-private partnership being designed, constructed, operated and maintained by the consortium Iris Solutions (which includes Stantec Architecture). It will begin operations in early 2017.
In Alberta, WestJet recently announced it was looking to develop a biofuel to reduce greenhouse gas emissions. Fossil fuels today represent one of the airline industry’s largest and most uncontrollable operational costs. WestJet is teaming with the Clean Energy Technology Centre (CETC) to accelerate the development of sustainable aviation biofuel in Western Canada. The CETC itself is located in Drayton Valley, home also to the “Bio Mile,” an integrated bio-industrial park in central Alberta with close proximity to forestry and oil and gas industries whose infrastructure and human resources could eventually support the development of the alternative fuel source.
At the Atikokan power plant west of Thunder Bay in northwestern Ontario, Ontario Power Generation completed a $170-milion conversion from coal to biomass in 2014, making it North America’s largest 100 per cent biomass-fuelled power generating plant. The two year conversion project included plant modifications, and the construction of a fuel storage and handling system to enable the plant to burn biomass pellets and produce 227-MW of power. WorleyParsons, Nordmin, Doosan and Aecon were involved in the conversion.
And in April the Government of Quebec announced its new energy strategy, aimed at reducing greenhouse gas emissions. Among its goals for 2030 it plans to increase bioenergy production by 50 per cent.

Tree waste to cogeneration at UBC
As issues with airborne particulate and odour are resolved, biomass energy operations are even moving into urban areas.
One is the University of British Columbia’s Bioenergy Research Demonstration Facility (BRDF), a biomass combined heat and power plant that uses waste wood and tree trimmings. The plant displaces 12 per cent of the campus’s reliance on natural gas.
It is situated in the midst of the busy West Point Grey Campus in Vancouver, with residential buildings nearby. “What is unique is the setting. This is a power station for the community and we have sited it in an urban area,” says Paul Holt, C.Eng, director of engineering and utilities for UBC’s Energy and Water Services.
The $27.4 million, LEED Gold building, which in 2012 was the first to use Canadian manufactured cross-laminated timber construction, was also the first combined heat and power (CHP) plant in North America to convert biomass into syngas (synthetic gas) that is either burned in its raw form to create steam heating, or cleaned and injected into a combustion engine to create heat and electricity.
In the thermal mode, the facility produces 6 MW of thermal steam energy per hour; in its co-generation mode, it produces 2.4 MW of thermal energy through heat recovery and 2 MW of electricity from an engine.
The partnership making the UBC facility possible includes UBC Operations, faculty members, students and researchers, along with BC Hydro and Nexterra Energy, the turnkey supplier of the gasification/syngas technology and also the purification technology to cleanse the syngas. GE Power and Water is the gas engine supplier. The team for the building design included McFarland Marceau (architects), Equilibrium (structural engineers), Stantec (mechanical engineers) and Core Group (civil engineers).
Holt says the gasification process, which is common in Europe but has been technologically adapted by Nexterra, reduces the two to three truckloads of residual biomass arriving at the plant daily to a few scoops of ash. “One 20-foot truckload of ash goes out a month,” says Holt. He says air-quality monitoring at the surrounding residential buildings has found no particulates escaping or adverse emissions impacting the local community.
Approximately 12,000 bone dry tonnes of biomass material annually is sourced from within a 75-km radius by a processing aggregator firm. It chips the material to pieces that measure in thickness between ¼” to 2″ and have a moisture content below 40 per cent (the norm is 25-35 per cent depending on the time of the year).
The biomass material is auger fed into the bottom of a chamber that has a fixed bed gasification system. “It is in an environment that is oxygen starved,” says Holt. Hot air is moved into the bottom of the pile of biomass leading to stages of drying, pyrolysis, gasification, and ultimately ash, with the syngas rising to the top where it is captured as it leaves the chamber at a temperature of 500-700 degrees F (260-310 degrees C). It is then burned in an oxidiser to temperatures near 1,700-1,800 degrees F (920-999 degrees C) to produce heat for the boiler, which in turn produces thermal steam heat for the campus.
The biomass project is “multi-layered” as the facility is used both for research and demonstration. Holt says the research portion was directed towards determining whether syngas could be used to fire a gas engine, which proved successful: 400 hours of engine grade syngas and 220 MW of electricity was produced. Operational and material challenges stimulated the development of a dual fuel adaptation for the gas engine. The change enables the engine to be operated on either clean syngas or biogas, thus keeping the electricity production green and the greenhouse gas emission targets as planned. Since the conversion the engine has operated at a near 96% uptime.
The venture has achieved a number of other goals, including reducing the university’s reliance on fossil fuels and keeping in stride with its aggressive stance to reduce carbon emissions. In 2007, UBC had already met the Kyoto Protocol for its core academic buildings, then in 2010 the university announced it would commit to reducing its greenhouse gas emissions by an additional 33% from 2007 levels by 2015 — a target it has also achieved — and 67% from 2007 levels by 2020. The goal is 100% reduction by 2050. The Biomass facility has contributed by reducing the campus’s emissions by 5,000 tonnes annually, the equivalent of taking 1,000 cars off the road.
The facility has also demonstrated what Holt calls “social license,” as monitoring has shown that power plants using the gasification technology can be situated in residential areas without impacting neighbours.

Cattle farms as generators
In B.C.’s Fraser Valley, several large scale cattle farms have made strides in the use of biomass as they are converting their animal manure into energy and recycled materials. The latest dairy operation to make the conversion is Delta’s Seabreeze Farm, which is using CHFour Biogas technology to capture bio-methane gases and place it into the FortisBC system.
“One of the challenges was the farm’s close proximity to the neighbours,” says John Brewer, C.E.T. of CHFour Biogas. “There was potential for odour complaints.” Located in Ottawa, Brewer is the project leader on the farm’s installation.
The digester’s processing of bio-waste takes 24-30 days. While the digester’s bacteria are able to kill  pathogens and weed seed, they are unable to break down the hard cellulose, the residual plant fibre found in wood, straw and hay. At the end of the digester’s cycle, a liquid tea is squeezed from the digester’s residuals until only cellulose fibre remains. This cellulose material is cleaned and re-used as barn bedding. The tea is used as fertilizer, going to the field without the prolonged aging that is required for raw manure.
The CHFour Biogas system occupies several buildings and two receiving tanks that are connected to the digester. The anaerobic digester, which is the size of an ice-rink, takes the manure and bedding from the cow barns and mixes it with material from the two other receiving tanks containing bio-waste. A hydrolyzer tank receives organic material from Metro Vancouver households while the liquids tank receives spent restaurant and food cooking oils. These two organic feed streams speed the breakdown of the digester material, by promoting bacteria growth.
The bacterial process produces the methane gas. The digester has two rubber domes which inflate as the bio-gas is produced. Brewer says the flexibility of the roof domes allows the pressure to fluctuate within the digester gas zone while maintaining a continuous rate of feed to the upgrading system. The upgrader removes impurities before the bio-methane goes into the FortisBC system. There is provision at the FortisBC station to reject the gas if it does not meet the standard and recycle it back to the digester. The system also has flares where gas can be burned off in the event of a malfunction in the system and a build-up of the digester’s bio-gas.
Brewer says CHFour Biogas has installed 20 units in Canada and the U.S. as farmers learn about the economic benefits that biomass processing can reap. The Seabreeze Farm operation estimates a daily return of $2,000 in gas sales into the FortisBC system. Plus the use of the reclaimed cellulose for bedding on the large dairy operation can translate into annual cost savings of $50,000, while the virtually odourless nutrient tea that remains after the cellulose is removed can be used on the farm’s fields or sold. cce

Jean Sorensen is a freelance writer living in Vancouver.