“The tight urban site for this sports research and recreation complex necessitated a top-down built structure, in which the lower floors were suspended from a large truss. We admired this unusual arrangement which required complex detailing to deal with load deflections in the truss and movement in the lower levels.” – Jury 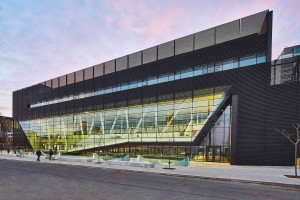 Part of an extensive renewal of the University of Toronto’s Varsity Centre, the Goldring Centre for High Perfomance Sport is a $58-million for sports research, medicine and recreation in the heart of downtown Toronto. The 150,000 sq.ft. complex has a fitness centre, a sport medicine clinic, and a 2,000 seat field house for basketball and volleyball.
The designers had to surmount a major challenge: building setback requirements meant there was not enough space on the site for the field house, so it had to be located below grade. The resulting design is in essence a three-storey bridge.
A system of six parallel truss sections running lengthwise across the building span 54 metres at each bay. The second and third floors containing offices, labs, and fitness facilities, are suspended from the centre truss sections. Many innovations were required to address the finer engineering requirements resulting from this design.

Design rationale
To keep the field house accessible and connected to the campus, and to minimize the depth of excavation required, the ceiling of the field house is one storey above grade. This meant transfers at the ground level were not possible, and the main structure had to be above the second floor.
Spanning the building across the narrow dimension of the site would have resulted in columns passing through the field house, interfering with seating, sightlines and possibly even play. Instead, the structure spans the long way — a 54-metre span requiring a structure depth of 3.5 metres.

Storey-deep trusses with suspended floors
With the full-storey-deep trusses at the fourth floor level and the second and third floors suspended from them, the engineers minimized the size of the hangers and their impact on the building space by using small-diameter high-strength rods. These were placed inside a non-structural hollow structural section, which was pumped full of grout for fire proofing. The approach provided the smallest overall hanger size, while accommodating a high-quality durable finish (painted steel) and providing a redundant load path.
To pass the many doors and corridors through the web of the trusses, web arrangements had to be very strategic. In some places webs could be cranked out of the way by adding a bracing member. In areas of very high shear, however, a full steel plate beam web was used.
Because the floors are suspended rather than supported, an innovative erection strategy was required: the top floor was constructed first and erection proceeded from the top down. Hollow-core precast slabs were threaded through the completed skeleton to fill in the floors.
An as-yet-undesigned academic tower that is to be built over the loading dock added a further challenge: a provisional tower design allowed the construction of foundations and ground floor columns in anticipation of the final design.

Transferring loads, cantilevers, soil pressures
Careful detailing was required to accommodate the ±54mm of live load deflection of the truss. The structure had to transfer lateral loads to the ground floor slab, while moving vertically using very shallow pre-stressed high-strength rod bracing.
While the second and third floors could be suspended, the 54-mm truss deflection would have resulted in unacceptable slopes at the ground floor, so it had to be cantilevered from the perimeter using post-tensioned concrete to minimize the structural depth.
The deep excavation generated extraordinary soil pressures, exacerbated by the fact that the interconnection of the perimeter wall with the adjacent floors was heavily perforated with stair openings. A conventional foundation wall spanning from the lowest level to the ground floor was found to be the most economical solution. Through careful analysis of the soil and the structural movements, the geotechnical consultant allowed a 33% reduction in the design earth pressure.
Energy savings and urban intensification
The building combines a high-quality building envelope with energy efficient building systems and materials with a reduced embodied energy. Urban intensification is possibly this project’s greatest environmental feature: by shoehorning this building onto a tight urban site, the designers left open sites for other purposes such as parks, green space or housing.