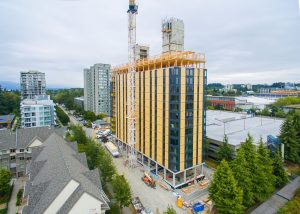 The mass wood structure and façade has been completed for the University of B.C.’s Brock Commons student residence, months ahead of schedule.

The structure was completed less than 70 days after the prefabricated components were first delivered to the site.  Wood advocates say the speed of delivery showcases the advantages of building with the material.

Work will now focus on interior elements, with completion expected in early May 2017 — 18 per cent (or four months) faster than a typical project. The building is expected to welcome more than 400 students in September 2017.

“This remarkable building, the first of its kind in the world, is another shining example of Canadian ingenuity and innovation, an apt demonstration of how Canada’s forest industry is finding new opportunities through technology and innovation — opening up a world of possibilities for our forest and construction industries,” said Jim Carr, Canada’s Minister of Natural Resources.

At 18 storeys (53 metres), Brock Commons is the first mass wood, steel and concrete hybrid project taller than 14 storeys in the world. The building has a concrete podium and two concrete cores, with 17 storeys of cross-laminated-timber floors supported on glue-laminated wood columns. The cladding for the façade is made with 70 per cent wood fibre.

The project is expected to cost approximately $51 million, with $47 million financed by UBC, and funding from Natural Resources Canada ($2.34 million), the Province of B.C. ($1.65 million), and the Binational Softwood Lumber Council ($467,000).

Other wood structure buildings on UBC’s Vancouver campus include the AMS Student Nest, the Engineering Student Centre, the Centre for Interactive Research on Sustainability, the Bioenergy Research and Demonstration Facility, and the Earth Sciences building.