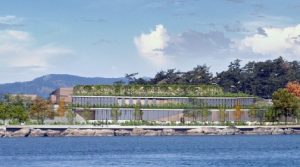 The Capital Regional District of Victoria, B.C. is facing a major decision at a board meeting on Wednesday, September 14 over its long-running dispute over how to deal with its sewage. The CRD represents 13 municipalities and three electoral areas on southern Vancouver Island and the Gulf Islands in B.C.  It is charged with finding a solution to their wastewater problems by September 30. That is the deadline set by the federal government for the CRD to come up with a plan to provide secondary treatment for the region’s sewage before it is released into the ocean.

The problem of what to do with its sewage has been facing the CRD for over 30 years. Currently the wastewater is screened (removing items 6 mm or larger) before it is dispatched into the Juan da Fuca strait. The Federal Department of Oceans and Fisheries requires that the sewage undergo at least secondary treatment by 2020.

After a long and complicated saga of failed proposals, things came to a head in March after the CRD voted to study a plan for two tertiary treatment plants, one in Victoria and one in Esquaimalt at a cost of $1 billion and local groups put up fierce opposition.

Facing this quagmire and the looming deadline, the province of B.C. appointed an independent panel  in June to study the possibilities and come up with recommendations.

That panel, the Core Area Wastewater Treatment Project Board (CAWTPB) released its final report on September 7. Chaired by Jane Bird, the board is recommending that a single 108 megalitre/day plant be built at McLoughlin Point in Esquimalt to treat wastewater. The plant, explained Bird, will go beyond the federal requirements and add tertiary treatment processes.

The board recommended that another plant to treat the biosolids be built at the Hartland landfill in Saanich. A conveyance system would be built to transport the biosolids from McLaughlin Point to the landfill where they would be treated in an anaerobic digester and then stored on an interim basis.  Bird said that over the next years the CRD should consult widely and find a process to deal with the biosolids as part of an integrated resource management solution for the region.

Another recommendation was to have a construction laydown area for the new wastewater treatment plant created at Rock Bay in Victoria, under lease from the Songhees and Esquimalt First Nations. Barges would be used for transporting materials to this location to minimize overland transportation.

Stantec was involved in the studies done for the project board’s recommendations; several documents by the consulting engineers were  included in the appendices. The CAWTPB board consisted of Jane Bird (Chair), Jim Burke, Brenda Eaton, Don Fairbairn, Dave Howe, Robert Lapham and Colin Smith

At least some local politicians are still vehemently opposed to having the wastewater treatment all directed to a single plant at picturesque McLaughlin Point. An article in the Victoria Times on September 8 quoted Esquimalt Councillor Tim Morrison wondering why the idea for a single site at this point had been resurrected since it had been ruled out earlier. The article by Pamela Roth quotes Morrison saying:  “It’s bizarre that the project board just put the CRD table back into a mad hatter tea party mode. It’s illogical, it’s unjust to Esquimalt, and it’s just complete insanity. All they’ve done is take the same report from three years ago and put some lipstick on it.”

The board did recommend that the CRD commit to doing advance studies for another wastewater treatment plant in Colwood.

In a video Bird pointed out that a plan must be in place by September 30, and that if the board’s plan is approved construction will start in six months so that the work can be completed by December 2020.

She said that the revised design for the McLaughlin Point plant recognizes that the ocean-front plant is much loved by the Esquimalt community. The new design has set the building further back from the shoreline, with more landscaping and a walkway along the seafront.

She also pointed out that at $765-milllion the revised plans are “significantly less expensive than previous plans.”

At its meeting on September 14, the Core Area Wastewater Treatment Project Board will ask the Capital Region District board to consider the report and approve the business case.

To read an article in the Victoria News, click here.

To watch a video of the announcement released September 7, click here.

POSTSCRIPT: On September 16 it was announced that the Capital Regional District (CRD) Board had approved the recommendations put forward by the Core Area Wastewater Treatment Project Boad (CAWTPB).  Click here.