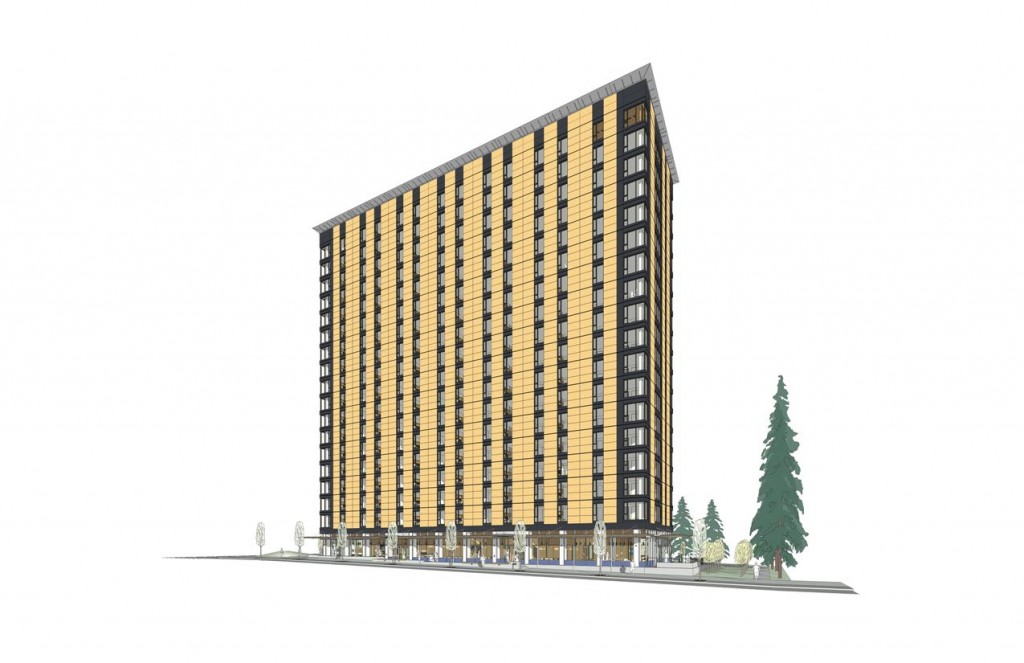 The tallest timber tower in the world is under construction at the University of British Columbia in Vancouver. The 18-storey Brock Commons Student Residence will be 53 metres tall when it is completed in 2017.

The $51-million building is located on the Point Grey Campus, and will have over 400 student rooms.

Located on Walter Gage Road, near the North Parkade, the tower is a hybrid structure consisting of 17 storeys of mass timber timber construction erected on a concrete podium and concrete stair cores. The vertical loads are carried by the timber structure, and the two concrete cores provide lateral stability. Glulam columns with steel connectors support 5-ply cross laminated timber (CLT) panels on a 2.85 m x 4.0 m grid, which acts as a two-way slab diaphragm.

Because the building is significantly higher than the six-storey wood structures currently permitted by the building codes, the project required Site Specific Regulation from the B.C. Building Safety & Standards Branch. Multiple layers of gypsum board encapsulate the mass wood structure for fire-rating purposes, but the wood is left exposed in an amenity space on the top floor. It has an automatic sprinkler system with back-up water supply, and the compartmentalized units have a 2-hour fire rating between suites, as opposed to the typical 1-hour rating.

The mechanical-electrical systems are similar to other buildings on campus, “with allowances made for the axial shortening of the structure.” The tower’s sytems will be tied into UBC’s district energy system. LEED gold certification for sustainability is the designers’ target.

It is also the first building in British Columbia to be built to the new National Building Code of Canada 2015 seismic requirements.

At six storeys, the Wood Innovations and Design Centre (WIDC) in Prince George, B.C. that opened to much acclaim in 2014 stands 29.3 metres high. Click here.

Another wood building of 13-storeys, measuring 41 metres high is also planned for a site in Quebec City. Europe has several contemporary tall wood buildings and one in Melbourne, Australia stands 32.2 metres high.

Click here to read an article about the fire protection of the Prince George WIDC by the Canadian Wood Council.