Hatch has established a new joint venture with a Chinese investment company, Zhongshe Baiqi. The newly-formed Hatch Beijing Environment & Technology Co. (HBET) is intended to provide solutions to some of the most serious environmental issues facing China today.  Prime Minister Trudeau was at the formal signing ceremony at a gala in Shanghai in September, during his inaugural trip to the country. Hatch says the HBET joint venture will draw on Zhongshe’s financial strengths and Hatch’s deep technical expertise and decades of environmental experience in the resources, energy, infrastructure and municipal sectors.  Joe Lombard, Hatch’s global managing director for metals, said: “Today, we’re building on Hatch’s strong commitment to China and moving forward to deliver a new level of environmental services and innovation…. Through this partnership, Hatch will introduce clean technologies and execute world-leading environmental remediation and management programs that support China’s policies to protect and improve the environment.” 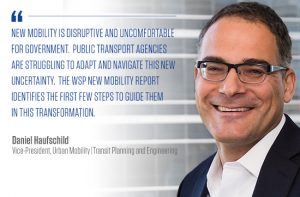 WSP Canada has written a report that examines the changing nature of mobility and transportation. “New Mobility,” was commissioned by Metrolinx, the provincial transportation agency for the Greater Toronto and Hamilton Area.

Produced this summer, the report examines transformative technologies, new government roles, user needs and desires, and urban form and the built environment.  It considers technology-driven increases in automation, connectivity and information sharing through the Internet of Things, automated vehicles and future proofing infrastructure. It also imagines two different future scenarios and how they might unfold; one path sees strong government direction, while another considers a more organic, less deliberate process.

Metrolinx commissioned WSP to research and develop the report, which the company completed over a period of five months.  Daniel Haufschild, WSP vice-president of urban mobility/transit planning and engineering, led the work, which included consulting a 28-member international Thought Leader Panel  from nine different countries.  To read the report, click here. 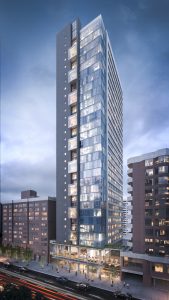 IBI Group is designing a 30-storey student residence tower under construction in downtown Toronto for Ryerson University. Developed as a public-private partnership between Ryerson and MPI Group, the tower is located at 186-188 Jarvis Street, a five-minute walk from the heart of the Ryerson campus. It is due to reach substantial completion in May 2018, and consists of a podium with retail at grade, and then over 172 units above, which range from one-bedroom to four-bedroom units.

The building will meet Toronto’s Green Building Standards and will have include open concept living spaces, open terraces and glassed-in lounges.