Consulting Engineers of Alberta handed out its Showcase Awards at a gala evening on February 4.

Three awards of excellence were given in the buildings category. Smith and Andersen won in the commercial category for the PCL North American Headquarters, Building 1. The building is targeting LEED gold and was designed using BIM and a virtually paperless process.

In the institutional building category, DIALOG won for the Donadeo Innovation Centre for Engineering at the University of Alberta. The 85,000-sq. fot. space will be home to 1,700 professors, graduate students, administration and support staff. It is built on a sliver of land 16 metres wide.

Stantec Consulting won an award of excellence in the community development category for the Snye Point Urban Park in Fort McMurray. In just over a year they transformed an undeveloped natural area into a much needed recreational facility that hosted several events during the 2015 Western Canada Summer Games.

Stantec also won in the community outreach and in-house initiatives category for a “Garden for Growth” created for Lethbridge Family Services.

In both the environmental and the natural resources, mining and industry category, an award of excellence went to AECOM Canada for the Giant Mine Roaster Decontamination and Deconstruction project. The closed mine has multiple problems, including the risk of collapse and presence of hazardous materials and contamination. AECOM worked with Golder in assessing, designing and supervising the project for the PWGSC and AANDC sections of the federal government.

A project in Saint Lucia earned Golder an award in the international category. The John Compton Dam De-silting and Rehabilitation project involved a plan to restore the island’s water supply at the main surface water reservoir. About 50% of the reservoir had become filled with sediment. The remediation plan calls for sediment management and dam engineering expertise.

Another win by Golder Associates was for the Dominion Diamond Jay Project in the Northwest Territories. Golder formed a team that helped the company with an integrated environmental assessment, design and construction project for what was formerly the Ekati Mine. The work will help keep the mine open.

In the “small firm, big impact” category, and in the studies, software and special services category, SMA Consulting won an award for STATES, Smulation Tool for Automated Tunneling Estimation and Scheduling. It uses discrete event and continuous simulation, integrating hundreds of variables.

The Bowness Sanitary Offload Trunk project by AECOM won an award of excellence for sustainable design. The project is nearing completion and will provide infrastructure capacity for 50 years for northwest Calgary communities. It involved tunneling under the Bow River.

In transportation, Buckland & Taylor (now COWI) won an award for the rehabilitation and widening of the Athabasca River Bridge on Highway 40 near Hinton, Alberta. The project brought the 99-year old bridge up to modern standards within a year. The rehabilitation cost 25% of what it would have cost to replace the bridge.

Dick Walters, P.Eng., and Don Chambers, P.Eng., founders of BW Brooker Engineering in Edmonton, won the Lieutenant Governor’s Award for Distinguished Achievement. Both individuals have been active on the CEA Board, and with the Association of Professional Engineers and Geoscientists of Alberta. 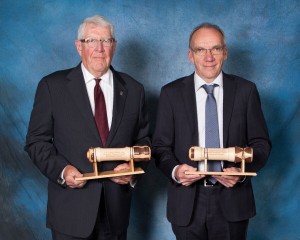