A massive roof structure weighing 490 metric tonnes was raised over the Toronto FC’s stadium in downtown Toronto on the weekend.

The installation is part of the second phase of changes to BMO Field, the open air stadium at Exhibition Place near Lake Ontario, downtown. It was built on the site of an earlier stadium in 2007 as a home for Toronto’s major league soccer team.

The canopy that was lifted on February 21 is the last of three that now cover the stands on the south, east and west sides.

Having been assembled into one unit on site, the south canopy measures 377 x 68 feet. Two massive lattice boom crawler cranes simultaneously lifted and then crawled the canopy into place. One of the cranes, the CC2400, was brought from Holland and is so large that it necessitated over 100 tractor trailers to transport it to the site.

The east and west canopies were built on-site in 100 by 40 foot sections and were lifted into place from the stadium’s exterior to prevent damaging the field. The support structure includes four steel super-columns constructed in each corner of the stadium. The column foundations are plugged into bedrock using a system of micro piles drilled 7 metres down, along with three enormous legs forged together at various levels to support the load of the roof trusses.

The engineering consultants on the project are Entuitive and Thornton Tomasetti. PCL Constructors is managing the construction. Canam Heavy fabricated the steel roof components in Quebec. BMO Field is owned by the City of Toronto and operated by Maple Leaf Sports and Entertainment. ICON is the owner’s representative and Gensler is the architect of record.

PCL Toronto senior project manager Neil Barrows said: “A critical lift such as the one we performed to raise the roof on BMO Field is an orchestration of precision and patience to ensure that every element goes exactly as planned. We have been methodically planning for this moment for over two years in coordination with our partners to ensure it’s done right for the safety of all workers and the enjoyment of fans.”

Besides being the home of the Toronto FC, the field is also being adapted as the home of the CFL Toronto Argonauts. The changes required an extended field of play, new movable north and south stands, and lighting. The playing field will be a dual system between natural grass and artificial turf.

The phase 1 changes completed last year added 8,400 seats to the east grandstand, creating a total capacity seating at the venue of 30,000. A continuous concourse level was added, as well as a kitchen, concessions, and executive VIP spaces.

To view PCL’s time lapse video of the roof being raised, click here. 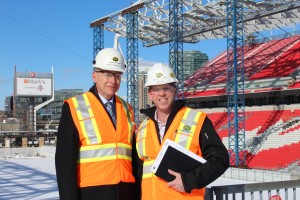