VanCity and Sechelt projects show how green is done 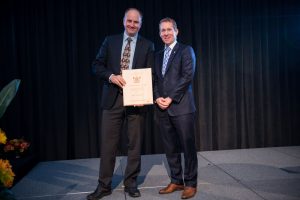 At the Association of Professional Engineers and Geoscientists of B.C. (APEGBC) annual conference in Victoria on October 21-22, the association handed out its annual awards, including two to consulting engineers for environmental projects.

Winners of the Sustainability Award were SES Consulting for the VanCity Heat Reclaim project. As Scott Sinclair, P.Eng. and Chris Goodchild, EIT, explained in a video, the project involved capturing waste heat from the data centre in the 13-storey office building and using that heat to reduce the heating load on the boilers. The system takes the low grade heat from the data centre, raises it from 20 C to 50 C and then sends it into the building. As a result, gas consumption by the 100,000 sq.ft. building has declined by 97% since January 2015, giving a payback of 6.3 years. The SES engineers say the project shows the potential of heat recovery technologies, and that they can be applied to any building that has simultaneous heating and cooling. They’re now applying it to hospitals, shopping centres and ice arenas. 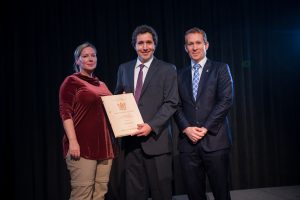 The Environmental Award went to Urban Systems for the Sechelt Water Resource Centre. Built on the site of a former treatment plant and public works yard in a residential area, the water treatment takes place inside a facility that looks like a greenhouse. Inside this glass space Organica bed batch reactors combine treatment and clarification in the same tanks and incorporate plant roots into the process. “The roots greatly increase the biodiversity in the reactors,” says Cameron Morris, P.Eng. of Maple Reinders Group, on the video. Compared to the traditional process, the new plant has reduced the amount of waste solids released into the ocean by 90%, and it produces biosolids that are composted and sold commercially.  The plant also reclaims water that can be diverted into landscaping, agriculture and gravel mining. Matt Smith, P.Eng. of Urban System says the project has turned “a noisy smelly neighbourhood eyesore into an attractive and environmentally friendly water resource recovery centre. With the new facility we’ve been able to eliminate noise pollution and odour.” The plant has double the capacity of the old one and uses 48% less energy, partly thanks to solar panels on the roof that provide 10% of the facility’s power in sunny weather. The entire facility is designed for LEED gold certification.

For an article about the Sechelt plant in Canadian Consulting Engineer’s June-July 2016 issue, click here.

The eight APEGBC awards to individuals included a Meritorious Achievement Award to Gerald Epp, P.Eng. of StructureCraft, and an honorary membership in the association was given to well-known Canadian architect Peter Busby.