At the Sechelt Water Resources Centre in B.C. innovative technologies save wastewater effluent from being discharged into the ocean. 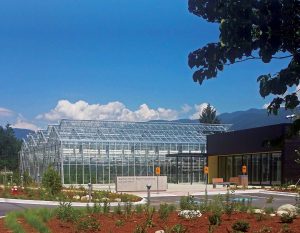 By 2011, the District of Sechelt located on the Lower Sunshine Coast of B.C. had spent four years developing a vision for its wastewater management. Both of the district’s two aging sewage treatment plants had received frequent odour and noise complaints. The Ebbtide plant was at the end of its life, while the Dusty Road facility had high energy demands. After secondary treatment all of the effluent was discharged to the ocean.
With a goal of demonstrating leadership in wastewater management, in 2012 the district issued requests for proposals for a new wastewater treatment and reclamation facility on one of three sites.
The proposals for the new plant were originally to be evaluated primarily on technical criteria, with capital, operating and maintenance costs making up only 20% of the score. After their initial proposal was turned down, Maple Reinders and its design-build partner Urban Systems “decided to either pass on the job, or come up with a creative idea,” says Chris Town, P.Eng., Urban System’s lead engineer for the project.
Town says their team decided to select the Ebbtide Road plant site for their proposal, a site which is in a residential neighbourhood, next to a park. Veolia Water Solutions & Technologies Canada suggested they consider the Organica fed batch reactor (FBR) system, which uses plants to help treat wastewater. Originally developed in Budapest, the Organica system is now in use in many European and Asian facilities. With this innovative technology in their proposal, the Maple Reinders-Urban Systems team won the Sechelt Water Resources Centre project in 2013.
The treatment capacity of the new plant, which began operation in 2015 averages 4,000 m3/day, up to a maximum of 6,000 m3/day — double that of the former Ebbtide Road plant. The Dusty Road plant now provides pre-treatment for the trucked wastewater, and its effluent is redirected to the Sechelt centre to complete the tertiary treatment process.
Nitrification and denitrification
Like a sequencing batch reactor (SBR), the Organica FBR combines treatment and clarification in the same tanks, i.e. the tank can be aerobic or anoxic. The difference is that plant roots are incorporated, providing habitat to increase biomass and biodiversity in the tanks. The plants allow simultaneous nitrification and denitrification to occur within the tank, a feature normally only found in continuous flow systems. This combination offers benefits in terms of energy consumption and overall operating efficiency.
“The plants contribute about 15% of the treatment capacity,” Town explains. The Organica FBR is very effective at treating the soluble biochemical oxygen demand (BOD) in the system, but to achieve the stringent effluent criteria required by the municipality (5 mg/L BOD, 5 mg/L TSS, 1 mg/L turbidity), ultra-filtration membranes are used to remove suspended contaminants. With pores approximately 1/1000 the diameter of a human hair, they are very effective at removing the remaining solids, suspended BOD and turbidity.
The greenhouse built over the tanks not only protects the plants and gives the appearance of a botanical garden, but may also reduce odours from leaving the facility. The process itself is said to generate little, if any, odour.
Rather than being discharged into the ocean, 100% of the liquid effluent can now be re-used for gravel-washing, golf course or public park irrigation. Town says approvals for use of the effluent outside the plant have not yet been obtained, but the effluent is being re-used inside the facility for polymer dilution, backwashing ultra-filtration membranes, cleaning tanks and channels, washing screens and flushing toilets. With biosolids now being composted (to Class A compost at an off-site facility, for sale and re-use), waste solids discharged to the ocean have been reduced by 90%.
Energy use has been reduced by almost half: a heat recovery system extracts heat from incoming sewage to provide most of the facility’s heating needs, while a rooftop solar system provides up to 10% of its power requirements. Noise has been reduced by using reclaimed water in a heat exchanger to cool the emergency generator.
Neighbourhood benefits
A brownfield site that was a cause for complaint from residents whose homes surround the site on three sides, has been repurposed and improved by the addition of a wastewater treatment facility. “I’m 99% sure this is the first sewage treatment plant that has increased property values in the residential area around it,” Town says. “I commend the mayor and council for sticking to a vision that cost a few million more (than a conventional solution). They selected the right process and fitted it to the site.”
The Government of Canada contributed over $18 million to the project through various funds. The Province of B.C., the Sechelt Indian Government District, and the District of Sechelt provided the remaining funding for the $24.9-million project.
Since completion of the project, staff from Maple Reinders and Urban Systems have met with their counterparts at Organica in Budapest to secure the right to represent Organica on Canadian design-build projects.