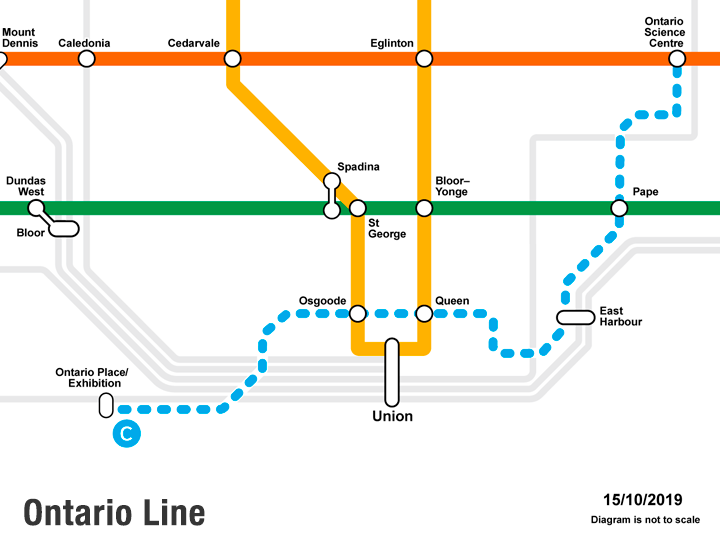 The RFQs represent the first step in selecting teams to construct the project, which will run from the Ontario Science Centre to Ontario Place. More than half of the 15-station route (pictured as blue dotted line) is planned to run underground with new tunnels, while the rest will involve elevated and at-grade rail corridors. Stations will connect to the city’s broader transit network.

The Ontario Line involves three separate public-private partnership (P3) procurement contracts: one for ‘rolling stock, systems, operations and maintenance’ (RSSOM) for the entire line; and two for ‘civil, stations and tunnel,’ separated for the line’s southern and northern segments. The idea is for each contract to involve manageable size and acceptable risk. Their schedules will be aligned to support a single in-service date.

The first two RFQs are for the RSSOM design-build-finance-operate-maintain contract, with a 30-year term, and the southern civil, stations and tunnel design-build-finance contract, covering the portion of the route from Ontario Place to the Don Yard. (A third RFQ for the northern civil, stations and tunnel contract is scheduled for release in early 2022.)

To bid on the contracts, companies must register at Merx to download the RFQs. After evaluating submissions, IO and Metrolinx plan to invite a short list of companies to respond to a request for proposals (RFP) this fall.

Also, beyond the main P3 contracts, a series of contracts for early works projects, to be procured traditionally, will begin to be issued later this year.