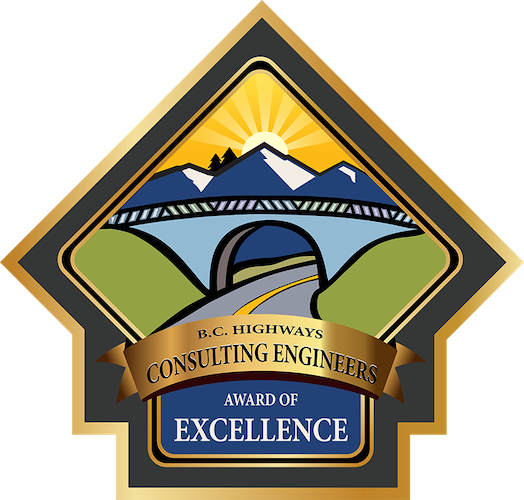 On Jan. 28, British Columbia’s ministry of transportation and infrastructure handed out the 2020 B.C. Highways Consulting Engineers Awards in Vancouver. The program is designed to recognize technical excellence and innovation.

The winner in the ‘design and contract preparation – roads’ category was ISL Engineering and Land Services for the North Fork Bridge replacement and four-laning project on the Trans-Canada Highway approximately 28 km east of Sicamous, B.C. ISL worked with the ministry’s structural engineering team to replace the highway’s last remaining metal-truss bridge, built in 1958, with a 66-m concrete bridge. The design allowed construction of a westbound structure while traffic remained on the existing bridge; then, an eastbound structure was built after traffic shifted to the new bridge.

The top honour in the ‘design and contract preparation – structures’ category went to Stantec Consulting for the Nass River Bridge replacement on Highway 37, approximately 76 km east of Stewart, B.C. The design for a new two-lane, 130-m bridge had to accommodate large transport trucks in a remote northern location where the varying terrain and rock quality posed challenges.

The award in the ‘construction management and supervision services’ category went to WSP Canada for the Highway 1/Mountain Highway interchange in North Vancouver. While this project was constrained by steep terrain and tight work spaces, WSP monitored the operation and safety of traffic management and detour plans, lane closures and temporary pedestrian and cycling connections.

The top honour in the ‘specialized engineering services’ category went to R.F. Binnie & Associates for the Alex Fraser Bridge capacity improvement project on Highway 91 in Delta, B.C. This project involved adding a seventh lane, a moveable barrier system and Western Canada’s only zipper truck to create counterflow for traffic during peak times.