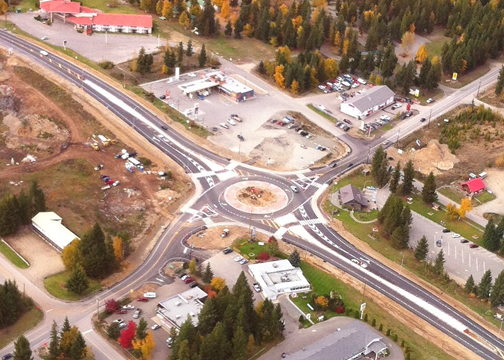 Roundabout at the intersection of Highway 5 and Clearwater Valley Road, in the district of Clearwater, B.C. McElhanney Consulting Services' work on the project won an award in the British Columbia Ministry of Transportation and Infrastructure's Deputy Minister's Consulting Engineers Awards given out January 28.

The awards have been given for the past 10 years to recognize “the excellence of consulting engineers that partner with the ministry in improving B.C.’s transportation infrastructure.” They were presented on January 28 in Vancouver.

H5M, a joint venture of Hatch Mott MacDonald and MMM Group, was first in the design and contract preparation category for the Cape Horn Interchange, which is part of the Port Mann/Highway 1 improvements. The interchange includes 13 separate structures, and was done while maintaining traffic on all the roads and ramps during construction.

Worley Parsons Canada won in the transit engineering category for their work on the SeaBus Facility Rehabilitation. The complex project included work on the aging marine infrastructure, including on the north and south terminals, and maintenance facility.

McElhanney Consulting Services won in the construction management and supervision category for improvements to the intersection of an intersection at Highway 5 and Clearwater Valley Road, in Clearwater in the B.C. interior. A roundabout that accommodates large roads was built in the intersection.

Buckland and Taylor won in the design and contract preparation – structures category for the BNSF Viaduct on the South Fraser Perimeter Road. The project included a new 450-m long concrete structure over the Burlington Northern Sante Fe railway. The design had to address varied seismic conditions along the length of the structure.