Jury Comments: “Engineering elegance and simplicity! We were impressed by the originality and the environmental savings in this arena retrofit. The new systems require practically zero operating and maintenance costs, even in this challenging northern landscape.” 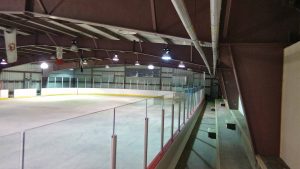 Located 1,400 kilometres North of Winnipeg in Canada’s high Arctic, the hamlet of Whale Cove wanted to transform their existing arena into a low cost, year round facility that would serve as both an arena and a centrepiece for the community.
In Nunavut, and Whale Cove in particular, hockey is tremendously popular. Home to a population of only 400 residents, Whale Cove boasts multiple men’s, women’s and youth hockey teams. The local players work hard to represent their community in programs like the Nunavut Stars Camp, the Kivalliq Cup, and the Arctic Winter Games.
The hamlet desired to renovate their existing arena with the central goal of extending the hockey season by four months. The existing arena’s lack of infrastructure resulted in a shorter hockey season and a competitive disadvantage for their athletes when competing against larger centres with “Southern-style” ice plants.
In addition to a longer hockey season, the community was looking for a zero increase to their operating budget, a system with minimal maintenance, environmentally conscious design, low water consumption, and very low power consumption.

Elegant in its simplicity, more than the sum of its parts
Accutech Engineering, which has developed a proprietary design to provide “zero-energy” refrigeration systems to arenas within Nunavut, was retained by the Government of Nunavut to provide project management for the Whale Cove Arena retrofit. The Accutech system is extremely simple, yet had never been done before.
The system consists of three primary building blocks.
• Concrete floor for the arena. This ensures the arena can be used during the summer months. It also provides thermal storage for the refrigeration system, and prevents rink-flood water from seeping into the permafrost.
• Thermosyphons. These provide energy-free refrigeration for the ice surface. With no moving parts, they are passive devices that transfer heat from beneath the arena floor to the cooler ambient conditions. Once installed, thermosyphons are maintenance free and allow for the design to eliminate pumps, compressors, and other conventional ice plant equipment.
• Ventilation system. It provides dehumidification, cooling and general building ventilation. The control system facilitates all aspects of the design with a simple user interface.
All the components were considered and designed with the end-users in mind and the need to maintain simplicity and low energy consumption.

Water, energy and cost savings
Electricity in Whale Cove relies on  diesel engine generator sets, which have a consumer cost of $1.22/kW-hr. It was estimated that operating an ice plant would cost in excess of $300,000 a year and that it would produce nearly 330-metric tons of greenhouse gases per hockey season.
The solution is estimated to consume less than 0.5% the amount of electricity used by a conventional ice plant. This translates to a minuscule carbon footprint that will avoid producing 6,600 metric tons of greenhouse gas over a 20-year operational period.
Water in Whale Cove is treated at a central water plant and then delivered to local users via truck. The process is expensive both in the cost of treating the water and in the greenhouse gas produced by delivery. By implementing a concrete floor, the design drastically reduced water consumption, preventing excess water from percolating through the gravel floor.

How the community benefits
Besides having an extended hockey season, the community has gained a central gathering place for community feasts, skateboarding, roller blading, and lacrosse. The net payback of this facility to the community is in the increased opportunity for physical activity and increased ice time which will yield positive effects on both the physical and mental well-being of the residents for years to come.