Jury Comments: “At one of the busiest underground transit stations in Canada the engineers successfully designed and managed the construction of a second platform. Since it was critical to keep the subway trains running, they found ways to control the dynamic and static forces on the structure and used a complex shoring and staging process. A side benefit of the project was enhancing the public "space on Front Street.” 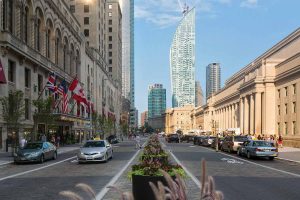 Union Station is Toronto’s primary transportation hub for both transit and rail passengers. Over 26 million people pass through it annually.
Recognizing the challenges associated with the aging infrastructure, the Toronto Transit Commission (TTC) and the City of Toronto initiated a project to restore and refurbish the underground subway transit station, which is located north of Front Street and Union railway station.
Since an excavation of Front Street was needed for the changes to the station, the city seized the opportunity to reduce costs and minimize future disruption by undertaking the revitalization of the streetscape at the same time.
The TTC retained AECOM to provide project management, detail design and construction support for the station improvements.  The city in coordination with the TTC retained AECOM for the Front Street revitalization project.
By adding a second subway platform and expanding the concourse to include a single TTC fare-paid area and pedestrian by-pass routes, the transit hub was improved by creating much needed additional space for subway patrons. It gave a safer pedestrian flow and enhanced access to the GO Transit and VIA Rail stations to the south, and to the PATH system, office buildings and nearby attractions.

Complex modelling and shoring necessary
The project required innovative engineering to minimize disruptions to the subway operations, and roadway and pedestrian traffic.
AECOM found ways to control and contain the dynamic and static operational, gravity and ground forces to ensure the stability of the existing platform, the new subway platform and the underground structures. This work occurred throughout excavation, construction, commissioning and operation.
The removal of the station’s south wall required complex shoring to support the station roof and concourse slab, while maintaining road traffic over the station. Extensive excavation support systems were used to address the unbalanced earth pressures on the station box during construction. In excess of 40 distinct phases of construction were identified to permit the station to remain in service.
The project team studied base load cases; modeling the forces and assessing how they could be contained. This analysis was also used to design the supporting structures built to serve during construction. AECOM also created robust methods to verify that the station extension would result in a negligible transfer of contaminants, noise and vibration into adjacent properties.

An intricate maze of pedestrians, traffic and utilities
Complex construction staging was required involving traffic, pedestrian flows and transit operations. Road lanes and sidewalks were realigned, utilities were diverted, and decking was provided to allow access to buildings and roadways.
The roadway above the station is a major utility corridor with extensive communications trunk lines, electrical duct banks and trunk sewers. The majority had to be supported throughout construction; the negative impact from their failure would have been immense.
The Front Street design addressed this intricate maze of shallow utilities, chambers and vent shafts, as well as the roof of the subway box and second platform below.
Several ongoing concurrent projects in the vicinity (e.g. the North-West PATH project) created more challenges and required constant coordination requiring communications with all stakeholders. The designs also underwent several iterations to meet the requirements set out by the Environmental Assessment and the city’s approved budget. Numerous stakeholders were consulted throughout all the project phases.

High quality public realm
On Front Street, AECOM created a high-quality public realm in a heavily used street by paying attention to small details. Elements were selected and designed for stormwater loading and management, and for heavy use by people and vehicles during events. Future repair and maintenance were also planned for. It was the first time granite pavers were used on the travelled portion of a major city street.
Software programs were used to verify that the re-grading would maintain the minimum cover on existing underground utilities. Stormwater management studies were done to ensure that existing vents and stairs were protected during the design storm event. Structural soil cell systems were used to provide adequate soil volumes for tree growth and manual irrigation.
The Union Station/Front Street project is an integral part of the Toronto Waterfront Revitalization. It has resulted in a pedestrian-friendly public realm that meets the complex needs of one of the busiest roadways in Canada.
As Christopher Hume of the Toronto Star (August 6, 2015) put it: “The new Front is a product of a different mentality, one that doesn’t ignore complexity but embraces it.” The area has been dubbed “the new entrance to the city, Toronto’s front door.”