Jury Comments: “At the time this was the only government building in Canada to meet a LEED-EBOM Platinum designation. It shows a high level of commitment to sustainability by Infrastructure Ontario and demonstrates that it is possible to drastically reduce water and energy consumption, while improving the comfort of workers and reaching out to the community.” 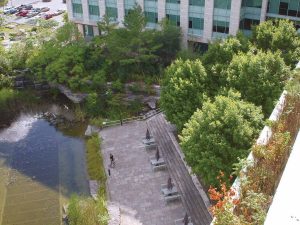 In 2010, Infrastructure Ontario made a strategic decision to pursue a LEED EB: O&M (EBOM) Platinum designation for Robinson Place. The 21,368-m², six-storey government building is located at 300 Water Street in downtown Peterborough, central Ontario. The LEED EBOM designation stands for “Existing Buildings: Operations & Maintenance,” and measures operating efficiency while minimizing environmental impacts.
Infrastructure Ontario engaged Morrison Hershfield to champion the LEED EBOM certification process at Robinson Place. They were  asked to engineer sustainability initiatives to increase the building’s energy efficiency, conserve water and contribute to making it a healthier work environment.
In August 2014 the Canada Green Building Council awarded it the Platinum rating. It is the first government building and one of only 19 existing buildings to achieve LEED EBOM Platinum in Canada.
The building also has an Energy Star score of 89, which shows it is performing better than 89% of its peer buildings nationwide.

Building automation and metering upgrades
Optimal efficiency is achieved because the HVAC system is balanced throughout the entire building, which also maximizes tenant comfort. The systems and equipment are fully metered and sub-metered, and connected to the building automation system. The system provides real-time notifications of any unusual spikes in the consumption of gas, water or electricity to the facility management team. Operators and service contractors can access the revamped interface over the Internet for trouble-shooting.
The new building automation system was also updated so that forward compatibility would be less of a risk.
Another feature is that the high efficiency chiller and motors have a “plateauing” effect, which transforms the usage profiles and leads to reduced energy costs.
The lighting system design leveraged the building’s original architecture and access to natural light; it includes new lighting and control systems, occupancy sensors and re-lamping with higher efficiency bulbs.
All energy used by the building has been offset with Green-e certified renewable energy.

Water conservation and stormwater management
The building’s water conservation systems and strategies include rainwater harvesting, sub-metering and cooling tower controls, with the result that the building uses 37% less water than the average public sector building. The stormwater pond and rooftop rainwater collection systems are connected to a 35,000-L cistern that was rehabilitated by upgrading the flow controls, filtration and pumping systems. Non-potable water from the cistern is supplied to water closets, urinals and outdoor hose bibs.
The rooftop garden is a key element of the site’s stormwater management system, while the planted areas are permeable and help with stormwater retention. Fish, frogs and marine plants live in the stormwater pond, which is bordered by natural rock and herb plantings. The on-site ground and roof garden vegetation comprises 31% of the property’s site area.

Process can be duplicated elsewhere
The process used for Robinson Place is now documented and easily duplicated across other facilities owned and operated by Infrastructure Ontario. As the first LEED EBOM project for Infrastructure Ontario, it will serve as a model for similar buildings and help the Agency chart a strong path for sustainability within its extensive portfolio.