In Kamloops, B.C., a lagoon — the most basic technology for sewage treatment — has been modified to provide state-of-the-art tertiary treatment with biological nutrient removal (BNR). 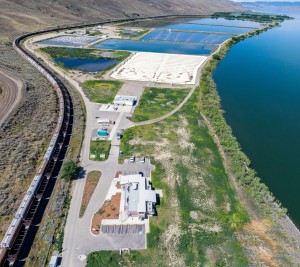 For decades the City of Kamloops’ wastewater treatment facility, located on the Thompson River across from the Kamloops Airport, has used lagoons for secondary treatment, adding chemicals to reduce phosphorus levels in the effluent. The effluent is released into the river.
To accommodate a projected population growth from 80,000 to 125,000 while continuing to meet the stringent permitted effluent phosphorous levels, it appeared the city would need to replace its lagoon system with a mechanical-based biological nutrient removal (BNR) process. The capital and accumulated operating costs over 20 years for a mechanical plant were estimated to be $73 million.
However, an environmental impact study and biological response risk assessment verified that a total phosphorus effluent concentration of 1.0 mg/L would maintain the ecological balance and protect aquatic life in the Thompson River, with little to no effect on the algal and invertebrate communities or fish population. Mechanical BNR plants are often constructed in order to meet the need for low effluent total phosphorus concentrations of typically less than 0.3 mg/L. The finding that a higher concentration would protect the environment opened the door to less expensive treatment alternatives.
Golder Associates and Urban Systems were retained to complete a detailed concept study. The study concluded that a lagoon could be modified by partitioning it with floating membranes and adding equipment to create the BNR process conditions. The system would achieve similar tertiary nutrient removal levels as a more expensive mechanical BNR process.
The resulting lagoon-based tertiary treatment process that was designed and constructed is a simple but state-of-the-art, sustainable solution that will save the city millions over the 20-year life of the facility. It also uses existing operator skills and reduces greenhouse gas emissions.

Mechanical BNR vs. lagoons
As illustrated in the diagram on p. 24, biological phosphorus and nitrogen removal is achieved in a mechanical tertiary treatment plant by recirculating wastewater and bacteria between structural tanks that are designed to maintain anaerobic, anoxic and aerobic environmental conditions. These mechanical plant configurations can be quite complex: the first BNR process in North America consisted of 21 individual bioreactor tanks. While simpler configurations have since been developed, BNR processes are still generally considered to be among the most complex and expensive domestic wastewater treatment systems to build and operate.
In contrast, lagoon wastewater treatment processes are generally considered to be among the simplest and lowest cost treatment processes. Their primary disadvantages are the large amount of land that they typically require and the inability to significantly alter or control the treatment conditions. They are also generally considered to be, at best, a passive means of achieving secondary wastewater treatment.

Modifying the lagoons
Ignoring this technology bias, the project team developed a design concept that involved modifying one of the existing secondary treatment lagoons to achieve tertiary treatment. The modifications included installing recirculation pumps, aeration equipment, and mixers, along with a concrete wall and two floating baffle-walls to partition the lagoon into aerobic, anoxic and anaerobic zones, as shown in the photo below.
The concrete wall that extends into the lagoon between the anaerobic and aerobic zones provides structural support for the mechanical equipment and electrical power required for the tethered mixers and recirculation pumps, as well as serving to anchor the two floating baffle-partitions (shown in red) that separate the three zones.
Two new clarifiers were constructed to retain and recycle bacteria back to the front of the modified aerated lagoon. The treated effluent is disinfected using ultraviolet light, eliminating the need for chlorine. This approach addresses the Canadian Environmental Protection Act requirement that effluent is free of toxic chlorine residuals.
The design modified an existing anaerobic lagoon for the purpose of pre-treating the raw wastewater while generating volatile fatty acids that are essential to biological nutrient removal. The anaerobic lagoon was covered to isolate the water from oxygen in the atmosphere, as well as to capture methane. Although the city is currently flaring the methane while decreasing greenhouse gas emissions by an estimated 8,900 tonnes per year (carbon dioxide equivalent), the intent is to consider energy recovery options in the future.
Several of the existing aerated lagoons were also retained to sustainably treat 5,500 m³/d of wastewater to a secondary standard for agricultural and golf course irrigation reuse. The effluent used for irrigation did not need to have the nitrogen and phosphorus reduced because these nutrients will benefit the vegetation. The reuse water application reduces the amount of potable water that would otherwise be required to satisfy irrigation demands.

Savings of $33 million and a “blue collar” process
A comparable mechanical membrane bioreactor (MBR) tertiary treatment process with a design horizon of approximately 20 years and a maximum daily flow of 60,000 m³/d was estimated in 2009 to cost approximately $73 million. In comparison the modified lagoon-based tertiary treatment process cost was $40 million, saving the city an estimated $33 million in capital costs. This novel solution maximized the use of existing infrastructure and freed up a considerable area of land for other uses, such as composting.
Completed in September 2014, the new facility is a unique wastewater treatment process based on the lagoon — which is arguably the most basic and common form of wastewater treatment used in rural areas across North America. A “blue-collar” process, the modified lagoon system is designed to remove both nitrogen and phosphorus robustly and inexpensively.

Education and sustainability
As public education is important to prevent contaminants, such as flushables, from being discharged to sewers, the City of Kamloops will use the new administration building that was part of the project to host tours and school groups.
The BNR facility is highly sustainable in that it:
• is the lowest-cost solution compared to a mechanical BNR process and meets regulatory requirements;
• improves the agronomic value of the residual waste biosolids by increasing the phosphorus content;
• saves up to $200,000 per year in chemicals to remove phosphorus;
• incorporates existing wastewater treatment lagoon infrastructure and operator skills;
• protects the aquatic environment in the Thompson River; and
• captures methane gas while reducing greenhouse gas emissions by 8,900 tonnes per year, and makes bio-energy recovery possible in the future. cce