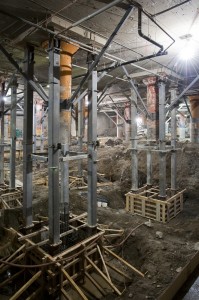 After years of deliberation about congestion at Union Station, the City of Toronto moved forward with the ambitious and yet undeniably vital undertaking of redeveloping this transportation hub, which serves 65 million passengers annually.
The project aims at enhancing the transportation functions of the station, revitalizing it as a destination, and implementing capital improvements. These include preserving and restoring its heritage character as a designated national historic site. Located on Front Street West between Bay and York Streets, the station serves intercity passenger trains and has a rail passenger concourse and commuter GO train concourse in the basement.
Toronto-based NORR was commissioned to plan and design the renovations, produce tender documents and administer the construction contracts of the $640-million revitalization project. NORR’s scope covered architecture, interior design, structure, mechanical and electrical engineering.
With the site’s considerable spatial limitations and heritage conservation constraints, expanding the concourse, improving its services and creating viable retail space presented an enormous challenge. In 2007, NORR had been working with the City of Toronto together with stakeholders to come up with feasible options. An idea was put forward then to expand underneath the station. The concept was frowned upon at the time by some of the stakeholders and many doubted its constructability. But building on top of the track level was not permissible from a heritage standpoint, and the existing basement space below the tracks was simply too limited to fulfil even the most basic needs of the revitalization.
NORR went on to study and verify the viability of what was termed the “dig-down” approach. The basic concept is to create a second basement level below the existing one, which technically is termed a viaduct structure as it supports trains. The project is unprecedented in Canada in scale and engineering, and logistical complexities. The city and the various stakeholders finally gave their blessings for design to proceed in 2008.
The revitalization project now underway will increase Union Station’s gross floor area from 822,000 to 936,000 sq.ft., all within the existing heritage envelope. GO Transit’s space will increase from 30,000 to 120,000 sq.ft. and will transform the first basement into a concourse. The concourse will be connected to the Toronto Transit Commission’s new subway train concourse to the north through a beautiful massive skylight roof over the historic building’s moat. The pedestrian experience will be further enhanced by walking through an atrium space that is crossed by a glass bridge. Commercial retail space will increase from 35,000 to 152,000 sq.ft., the majority of which will be in the dig-down second basement.
The “dig down” involves incrementally shoring the track slab, excavating, extending columns down, and building two new slabs; the lower slab serving as a retail floor and the upper one housing the concourse. The modified viaduct is being seismically upgraded with a combination of shear walls, column jacketing and column reinforcement using carbon fibre reinforced polymer (CFRP).
Construction began in 2010 and is likely to continue through 2017, taking place in stages. The dig-down constitutes only one component of this major project. In fact the total area of the renovated and new space amounts to just under 1 million square feet.
Other major projects at the station’s site have coincided in time with the Union Station Revitalization project and will upon completion change the quality of the area beyond recognition. These include the Second Platform and Concourse Improvement at the Toronto Transit Commission’s Union subway station just to the north; Metrolinx’s Train Shed Roof Revitalization above this project, and finally the Northwest PATH Tunnel. The engineering of these three projects is done by other consultants, while NORR is the architect of the third, which aims to enhance the flow to and through Toronto’s extensive pedestrian underground PATH system.

Adapting the historical structure and monitoring
Union Station was opened in 1927 after two decades of planning, design and construction. The head house of the station was completed in 1921 as a fine example of Beaux-Arts architecture. The building is a hybrid of steel and masonry structure common to that period and has a unique Guastavino vaulted ceiling which is supported by a steel roof truss over the great hall of the station.
A reinforced concrete flat slab viaduct structure supported the tracks at an elevated level above the adjacent Bay and York streets. The space below this track slab had been grossly underused for decades, but now would be incorporated into the station expansion. The green light given for the project was predicated on two conditions; that train operations are completely unaffected by the construction work below, and that the movement of the track slab is tightly monitored to verify the designer’s forecasts and assure stakeholders that movements resulting from the construction are negligible.
Monitoring is being done by several techniques, including the use of robotic total stations which measure movement of the track slab 24/7 and automatically send out alerts by e-mails if movement at any location exceeds a predefined threshold. Electrolevel beam sensors are also used. These are basically segmented electrical levels mounted to the underside of the track slab that measure tilt and transform it into deflection values. It is believed that this monitoring program is the most extensive and innovative of its kind in Canada.

Cutting of columns and construction below
While the 1920s design drawings were, at least partially, available, a number of unknowns remained. Testing and exploration from the surface could not cover every concealed detail, but a fair understanding of the subterranean conditions of soil and structure were ascertained for a rational design. The slab supporting the trains is shored, hydraulically jacked by 80% of columns’ locked-in forces, columns are cut, foundations demolished and new columns are instated at a depth that is 3 to 4 metres below the current basement level.
The removal of columns and construction of the two-storey structure below is performed in a well defined sequence to ensure the lateral stability of the 220-m long viaduct. The use of self-consolidating concrete in conjunction with high performance grout for the top part of the column is essential for structural integrity and ease of construction.
At the time of writing this article the majority of the concrete columns marked for replacement have been successfully executed, and the new concourse and retail slabs have in large part been cast and in some cases architecturally finished. A transition to the new concourse is being coordinated to allow the current GO concourse to be excavated and redeveloped.
The column gridlines in the middle part of the viaduct are 4 metres on centre which is quite narrow for a modern high-end mall. A structural solution had to be found for shifting 1.2 x 1.2-m wide columns, again with trains running on the tracks above. Two lines of columns along the mall’s main corridor were removed and replaced by more widely spaced steel columns. Major steel beams transferred load from the cut columns to the new ones. A column-free loading dock is also crucial to any mall’s operation. A line of columns thus had to be completely removed, and the track slab above is being supported instead on storey-high steel trusses. This approach created a 16-m wide truck loading zone.

Maintaining escalators and services during construction
During the latter part of the 20th century the station was equipped with a number of escalators taking passengers from the concourse level to the platforms. These escalators were supported by steel posts and helical piers, which were screwed into the soil-fill that overlaid bedrock and formed the substrate for the existing basement. All of this soil had to be excavated as part of the dig-down, which would have left the escalators with no support.
A structural solution was improvised to keep the escalators operational as work proceeded beneath. The escalators were supported from within the dig-down by properly designed steel frames that were anchored to the main viaduct columns. The escalators were jacked and their load was transferred onto the new steel framing, which is now completely hidden in the ceiling space of the retail level.
Another challenge is making sure that existing services continue to operate during construction, that new systems are installed and that these are transitioned into operation seamlessly. When one considers the history of the station and the maze of service tunnels housing old and relatively new lines, from steam to fibre optics, one can appreciate the complexities involved. The problem is compounded when much of the station is being dug under. Some old tunnels disappeared, others were carved in the shale bedrock, and above-grade services had to be threaded into the existing building fabric and through limited ceiling space. 3D BIM models of the structure and duct/pipe-work, much like submarine design, were applied to optimize the use of space.

Rock issues
As with many projects in Toronto’s downtown, rock creep was flagged as a potential source of exceptionally high lateral pressure on tunnel walls as a result of a phenomenon called rock-squeeze. Soil-structure interaction analysis was undertaken to quantify the true impact of a possible rock movement on the tunnels. This was augmented by detailed monitoring of actual rock movement in the tunnel trenches.
To mitigate the impact of excavating in rock close to the existing foundations an ingenious approach was improvised involving drilling holes roughly 3 metres apart to the desired excavation depth, and running steel wires to saw cut the shale. This method produced perfectly intact, almost polished, vertical surfaces in the rock.

Even more complicated…
Perhaps the most interesting and unique component of the project will be embarked upon in the months to come when the second stage of the project commences. To date, all the dig-down has taken place underneath the one-storey viaduct structure. A significant portion of the stage II dig-down occurs under the five-storey east wing of the head house. Removing the columns of this steel framed building cannot be done by simply shoring the lowest floor. In fact, each floor would need to be shored down to bedrock before the columns could be cut safely.
The alternative, which was selected, is to grip the columns from the bottom, jack the entire building and cut the columns below the grip point. This approach was used 15 years ago in San Francisco City Hall, a building of the same vintage and almost identical structural system. The objective was different there, as 530 columns were cut and temporarily jacked to install seismic base isolators. The San Francisco case inspired NORR engineers and contact was made with the sub-trade that carried out the jacking. Details were then developed to suit Toronto’s Union Station.
Not only will the revitalization project have a long-lasting impact on the vibrancy of Toronto, but also it promises to leave a legacy for years to come of innovation in architecture and engineering thatwas undertaken locally.     cce
Hassan Saffarini, P.Eng, Ph.D, is the structural engineering manager, senior project manager, at NORR in Toronto and the lead structural engineer on the Union Station Revitalization project.

This article is from the March-April 2015 print issue, page 8.