Engineers are finding new design tools to make space for bikeways on our roads to make things safe for everyone. 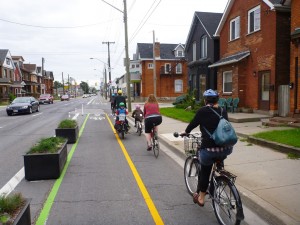 Riding along on a bike you feel as free as a bird. With the wind in your face, objects flying by, you experience the world almost as if you’re defying gravity.
No wonder then that cycling is becoming more popular. It’s healthy for the planet. It’s healthy for your body. You can avoid cramming into crowded transit, and it let’s you speed on your way past frustrated drivers sitting idling in cars on clogged city streets.
Norma Moores, P.Eng., an associate with IBI Group in Hamilton, Ontario, is an engineer and a cyclist. She has also been involved in designing bikeways and cycling networks since the late 1980s and has made bikeways her specialty.
Moores explains that according to the 2011 National Household Survey, around 1.3% of Canadians cycle to work. However, the percentages are much higher in downtown areas of cities like Toronto, Montreal and Vancouver, as well as in some smaller centres. And a much greater percentage of the population uses their bicycles for pleasure or non-work trips. She points out that the 2014 Share the Road Coalition found that 32% of Ontarians, for example, ride at least once a month. A majority — 54% — said they would like to ride more often.
What is holding more people back from riding is their fear of having to travel on roads alongside cars, buses and trucks hurtling past them at breakneck speeds. But it’s a two-way street in more ways than one. For every avid cyclist, there are many more motorists who are nervous about driving close to those on two wheels and concerned about the increasing numbers of cyclists on the roads.
The obvious answer from a safety point of view and to lessen the conflicts is to have more separation between the two transport modes. What this means is that cities need to build more bike lanes and bike networks.
Moores understands that municipalities are cash-strapped and struggling to find funds for infrastructure already. But, she says, “Even if municipalities were to take 2% of their road capital budget and put it towards cycling infrastructure, we would see an expansion of our cycling networks.”

The engineer’s conundrum
There are physical as well as financial constraints. For engineers the challenge comes in finding the space for bike lanes on existing roadways. “It’s hard to shoehorn everything into the right-of-way that is available,” Moores says.
Even on the most ideal roads there will be clash points. Bridges, underpasses, steep ravine slopes, ditches and expressway crossings can narrow a roadway so much that they force the bikeway to end.
Moores once had a project where the obstacle was a cemetery that came close to the road with graves that couldn’t be moved to enable the necessary road widening.
Or there can be a conflict with underground infrastructure. Moores recalls a proposed bike lane in Waterloo, Ontario: “The boulevard has both a hydro corridor and a watermain. So we were stuck. How do we widen the road for the bike lane without moving the poles or without the new curb [being] on top of the watermain? ”
Some of the most dangerous points are at intersections where bike lanes end to make room for a vehicle turn lane. A 38-year old female cyclist in west end Toronto was killed in November 2011 when she was dragged under the wheels of a heavy truck while both were turning right on a corner. She had a child’s trailer attached to the back of her bike, but thankfully it was empty.
NEW DESIGN TOOLS
Engineers and urban designers are working on solutions to the conflicts and constantly striving to make the roads safer for everyone. Moores describes some of the tools and techniques they are starting to use.

Bicycle Boulevards
To encourage cyclists to use local, residential streets rather than busy arterials, cities are creating “traffic calmed bicycle boulevards” or “neighbourhood greenways,” Moores explains. These roads usually have no more than 5,000-7,000 vehicles a day and a speed limit of less than 50 kilometres an hour. The traffic calming devices might include an island that allows cyclists but not vehicles to travel across it in order to discourage cut-through traffic. Or stop signs may be replaced with traffic circles, which slow traffic but do not force cyclists to stop often along the route. At busier intersections, push buttons within reach of cyclists allow them to trigger a traffic signal to cross safely. “Vancouver has an excellent network of these local street bikeways,” says Moores.
“It’s a combination of little elements strung out along the route that make a bicycle boulevard work really well,” she adds.

Buffered and Segregated Bicycle Lanes
“Next is to provide actual space on the roadway,” says Moores. A conventional bike lane would be 1.5 metres wide but could also have a painted buffer 0.5 metres wide to make it more comfortable for cyclists and motorists. A segregated bike lane or cycle track has something like flexible posts, planters or a raised curb to segregate it from the traffic lane. “They’re on busier routes and they’re more continuous. And there are bigger costs associated with them.”

Reassigning Road Space
“Whereas we used to build travel lanes at 3.5 to 3.7 metres wide,” says Moores, “new guidance and safety studies out of the U.S. suggest that in an urban area, a lane that’s only 3.0 or 3.25 metres wide can operate just as well. So if you have a four or six-lane roadway with lanes all built at 3.5 or 3.7 metres, you can start shaving those down to be narrower and you find a little extra space to fit in bike lanes or buffer bike lanes.
“Another technique that we’re using is a ‘Road Diet,'” says Moores. “If you have a four-lane roadway, you can restripe it to three lanes so that you have one travel lane in each direction and the centre turn lane allows left turns from both directions. What’s left over you can give to the bike lanes. It’s a nice result, but you have to apply it carefully based on the volumes. We know that if you have less than 20,000 cars a day, generally a Road Diet can work quite well on a four-lane road.”

Avoiding conflicts with buses …
On busy city roads with a frequent bus service, the combination of buses and cyclists can be troublesome. The cyclist passes the bus picking up passengers; the bus speeds up and passes the cyclist; the cyclist catches up at the next bus stop, and so they continue “leapfrogging,” as Moores describes it. The mix creates tense and precarious situations for both cyclist and bus driver.
As a solution, the example Moores gives is Sherbourne Street, a north-south street in downtown Toronto that has a segregated bike lane with a curb barrier. The bike lane is raised 150 mm at each bus stop and the pedestrians walk across this raised section to board or alight from the bus. The cyclists have to yield to the bus passengers, but they do not have to contend with the bus merging into and out of the bike lane at the stops.

… and surface rapid transit
Light rail and bus rapid transit systems (LRTs and BRTs) are being installed in cities across Canada, but these surface transit modes create daunting situations for cyclists.
“York Region has done a great job on their rapid transit corridor designs to put in a bus and bike lane on Highway 7 in Markham,” Moores says. The question was, “How do we make it safe not only for people to ride along a corridor, but actually to be able to make a left turn from this corridor? With all the travel lanes, and left-turn lane, and the bus rapid transit in the median, it would be daunting to be riding along and then trying to turn left.”
What York Region came up with, Moores continues, “is a new type of “Two Stage, Left-Turn Bike Box.” This is simply space set aside in the corner at a signalized intersection out of the way of the bike lane and sidewalk. Cyclists wait in the box until they can safely cross to the other side when the side street light turns green. A video explaining the procedure is on YouTube at www.youtube.com/watch?v=8IBruUhR9QU
Costs and the Complete Streets approach
Even where conditions are so ideal that creating a bikeway seems to be a simple matter of painting lines on the existing roadway, the budget has to account for additional features. The city might need to put up signals for cyclists riding against traffic, for example, or dedicate more funds for patching potholes. There are also maintenance issues, especially with segregated bike lanes that might require special snow clearing equipment.
The best solution to keeping costs down is to integrate a bike lane as part of a larger construction project, says Moores. Designers call this the “Complete Streets” approach. “Obviously if you can build a bikeway as part of a larger capital project, you’re going to see savings because you’re already mobilizing for construction,” she says. “We are starting to think, O.K. I’ve got to rehabilitate this road. What can I do to help cyclists, pedestrians, transit and other users?”
The other important aspect is collaboration. Engineers and their clients are often focused on producing a roadway as quickly and economically as possible. Adding bicycle lanes just adds to their stress load.
Moores has advice here too: “Generally within the engineering community we are working in very complex urban areas and we need to come together collaboratively, whether we’re somebody who is concerned about the underground facilities, or with a hydro company and wanting to maintain that infrastructure, or we’re looking at drainage or structures, or traffic systems and electrical systems.  It’s all very complex and we need to work together to understand what each other needs to make it work.”

Norma Moores, P.Eng., became involved in bikeway design in the late 1980s when she designed and assessed bike lanes in Guelph, southern Ontario as part of an environmental assessment. She has worked for several consulting engineering firms on bike lane projects in scores of cities across Canada and in Upstate New York and Brazil. She was on the working group responsible for the Transportation Association of Canada first Bikeway Traffic Control Guidelines and helped prepare the second edition. She is a Fellow of the Institute of Transportation Engineers and has won awards for her work, including the Albany Cycling Master Plan and Kitchener Bikeway Study. She is currently leading IBI’s comprehensive study for the City of Toronto which will outline the bikeways to be built over the next 10 years.