The CF Toronto Eaton Centre pedestrian bridge gets a makeover.

On April 10 Cadillac Fairview unveiled the design for a new pedestrian bridge linking the landmark CF Toronto Eaton Centre with the flagship Hudson’s Bay and Saks Fifth Avenue stores in the heart of Toronto.

“Beyond the simple utility of construction of a bridge across Queen Street, this pedestrian bridge will serve as a unique architectural icon and impressive space in its own right,” said Wayne Barwise, executive vice president, development, with Cadillac Fairview in the announcement.

The CF Toronto Eaton Centre is celebrating its 40th anniversary this year, and approximately 2 million people use the pedestrian bridge annually.

The original pedestrian bridge, designed in 1978 by Zeidler (in association with B+H) was taken down on the Victoria Day long weekend (May 21-22), and Zeidler is playing the role of executive architect on this project.

The structural engineering is being handled by Read Jones Christoffersen. The design and build of the bridge was assigned to seele canada Inc., the Canadian subsidiary of the German-based façade construction company seele, while the Walters Group of Hamilton, Ontario was sub-contracted by seele for fully modelling a cambered profile and supplying the main structural box girder supporting the architecturally exposed structural steel (AESS) ribs and façade created by seele.

According to Walters Group structural steel’s high strength to weight ratio made it an efficient material to span the length of the bridge. It can also be contoured with relative ease to match the various twists and turns required by the design.

Fabrication of the 95 tonne box girder began in Jan 2017 and was completed in early May. The 36.6-m x 4-m box girder was constructed as one fully-welded assembly.

The bridge twists from one end to the other, so the vertical and torsional camber was controlled by using a shop geometry fixture modelled to match the specific requirements of the bridge.

The cambering accounts for the deflection of the bridge under its full weight. After the box girder was shipped to the site, a further 130 tons (approx.) of glazing and secondary steel framing supplied and installed by seele increases the weight of the bridge to approximately 220 tons. 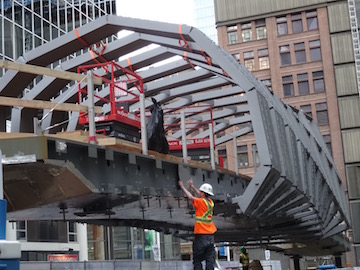 Under construction at ground level, around the corner from its final destination. (photo: CCE)

At publication, the bridge is still a work in progress being assembled at ground level around the corner from its final location. The girder was placed atop two temporary support towers designed for the full working load on the bridge.

Upon completion this fall, the bridge will be placed on a modular transport vehicle, moved to its location and raised hydraulically to its final position.