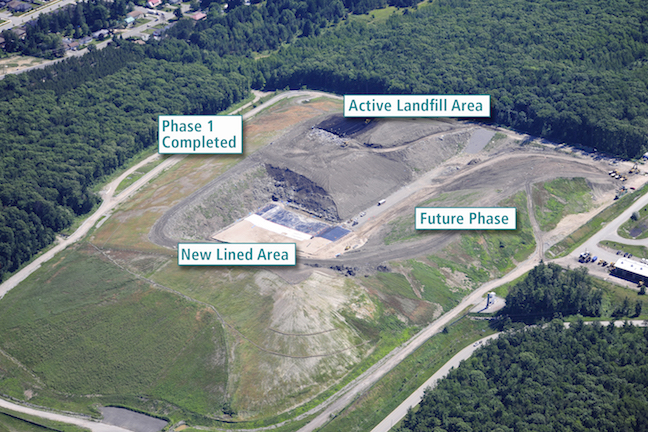 The landfill covers an area of 18.6 hectares and extends to a peak thickness of 30 metres. Originally designed as a natural attenuation facility, leachate seepage to the groundwater and impacts to an adjacent stream resulted in environmental risk and compliance issues.

Groundwater control systems consisting of a drain (gallery) and purge wells were constructed to intercept leachate impacts and discharge to the City’s wastewater treatment plant.

An updated landfill design was developed involving reclamation, or “mining”, of waste in the western two thirds of the landfill, and re-engineering of the site to incorporate a liner and leachate collection system (LCS) as well as a landfill gas collection system and flare. The project was undertaken to address environmental compliance and reduce the period and collection rate of the groundwater control systems. 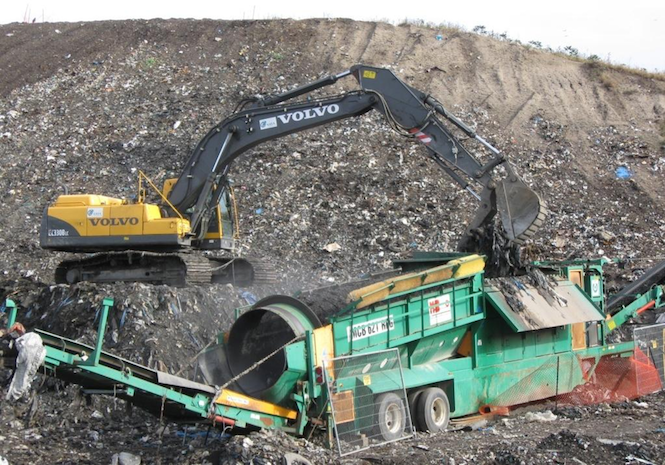 Landfill reclamation refers to the process whereby the existing waste fill is excavated, screened to remove the daily cover soil and then the remaining large waste fraction is re-landfilled using a greater level of compaction and less soil cover than had originally been used. The screened daily cover is referred to as “fines”, whereas the remaining waste component is referred to as “overs”.

While the primary intent of the project was to reduce environmental impact, it was also expected to result in a recovery of air space, thus extending the operational life of the landfill. During a pilot study, frequent and detailed surveys of the excavated and waste fill areas were combined with weigh-in-motion measurements.

The in-place density of the excavated waste was 1,310 kg/m3; the apparent density of the re-compacted oversize fraction was 1,280 kg/m3, as compared to a typical compacted waste density of 750 kg/m3. The mining operations were staged in three large phases, covering the south, central and northern parts of Cell 2 and 3.

Nearly 1,630,000 m3 of waste was excavated between 2009 and 2015, representing 44% of the total licenced landfill volume. Approximately 20% of the waste was re-landfilled without screening, including asbestos and newer waste which exhibited high odours during excavation.

The fines component averaged 53%. In some areas, large wood stumps and construction concrete rubble and a substantial proportion of tires were encountered. Wire and industrial fabric served as the greatest operational challenge slowing down the processing.

The waste materials in the newer part of the landfill consisted of more “uniform” waste and contained few tires or material that affected screening; as a result, the overall daily production increased.

The waste screening operations were undertaken using two 2.1 m diameter, 10-m-long rotating drum (trommel) screens with 52-mm openings. These screens were typically staged at the base of a waste slope and excavation operations were adjusted to push or occasionally transport waste to the screens.

The heavy equipment used in the operations typically included two to three large excavators with thumbs, two D-6 bulldozers and four articulated haul trucks (25 to 35 tonnes). The production rate for each screen averaged approximately 140 m3/hour over the project period.

Odour control and assessment of the potential for air quality impacts, notably relative to the nearest residences located 250 m away, was a significant part of the project planning and implementation.

Sampling of the landfill gas and of air quality upwind and downwind of the landfill indicated that there were no anticipated exceedances of the regulatory standards or health impact standard related to the reclamation process.

The City implemented regular odour inspections surrounding the site, and site operations were adjusted as required to ensure minimal impact to residents.

On a weight basis, the fines consisted primarily (74%) of fine-grained sand, followed by dry combustibles (15.4%) consisting largely of paper and fibre and plastic (7%). The fines quality largely meets Ontario Table 2 standards for final cover material, although boron and copper are occasionally slightly elevated.

Elevated electrical conductivity is observed, consistent with leaching of salts from the waste. Based on a risk assessment approach, the quality of the runoff from the site is not expected to adversely impact surface water quality. 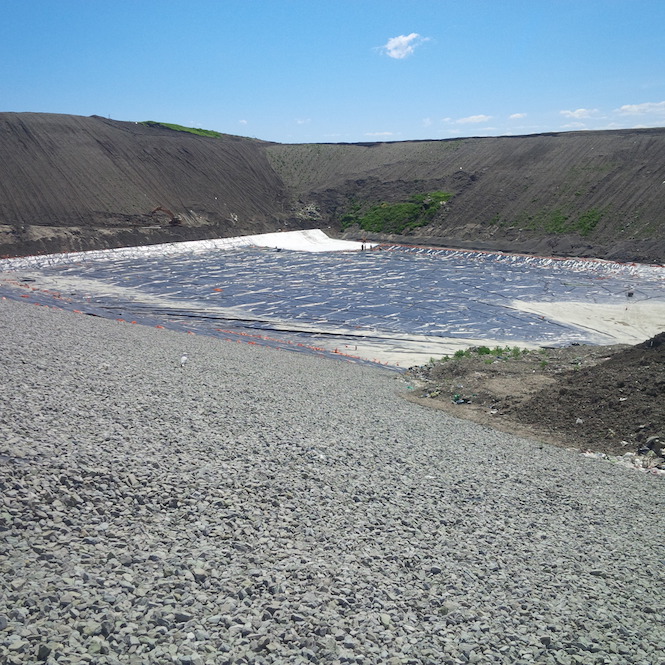 Construction of the lined waste cell.

The installation of the liner and LCS captures leachate and limits further impacts to the underlying groundwater flow. Once the existing plume in the aquifer under the landfill is captured by the purge well system and subsequently shut down, the flows to the wastewater treatment system will be reduced.

Furthermore, the cost of operating the active purge well system will end, and the leachate collection will be limited to gravity drainage of the LCS and gallery.

A landfill gas collection and flaring system was installed in the reclaimed portions of the waste in order to reduce the effects of greenhouse gas emissions. This system is currently collecting and flaring approximately 340 m3/hr of landfill gas, and it is predicted that a maximum collection rate of up to approximately 500 m3/hour may be achieved.

On this basis, and considering current approaches to funding of LFG power generation projects, installation of a 500 to 850 kW generator is considered feasible.

This gain represents increases resulting from (i) re-use of the fines component as daily cover, (ii) greater density of compaction of the in-place materials and (iii) reductions in waste disposal rates achieved since the reclamation project began.

Paul Dewaele, P.Eng., is a senior waste engineer with Golder Associates in Barrie. Sandra Brunet is the manager of environmental operations for the City of Barrie.