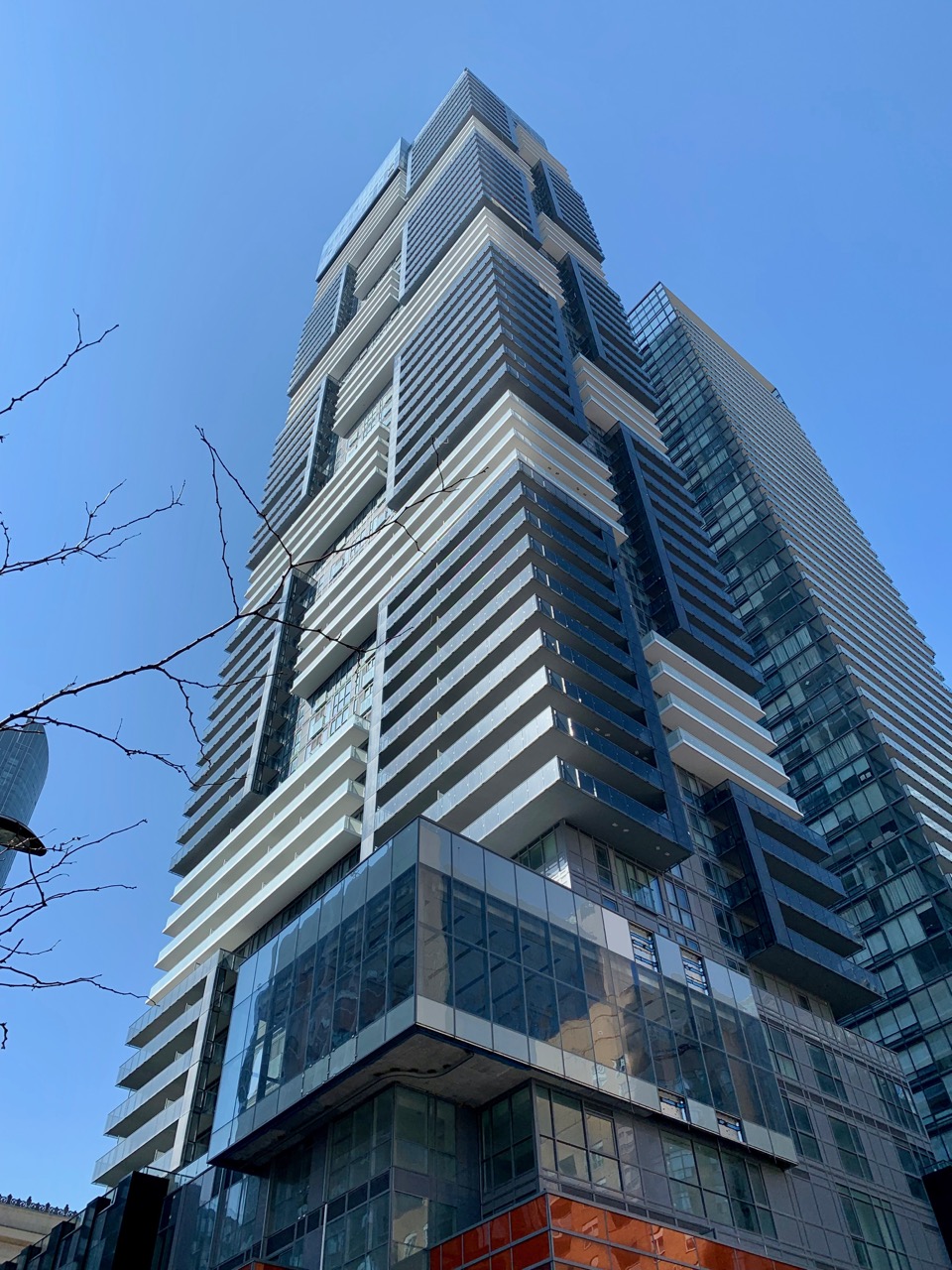 The 63-storey YC Condos building is a tall slender design with a world’s first damping system.

Toronto continues to be the crane capital of North America. The most recent Rider Levett Bucknall Crane Index places the Ontario capital well above other cities on the construction front, a title Toronto has held since 2017. As towers continue to climb in the city, structural innovation also continues to grow and develop.

In April of this year the YC Condominiums tower, a new 63-storey development located at the bustling downtown intersection of Yonge St. and College Ave, received international acclaim when it was honoured with the 2019 Council of Tall Buildings and Urban Habitat (CTBUH) Award of Excellence in the structural engineering category, presented to RJC Engineers, project structural engineers, and Kinetica.

YC Condominiums, developed by Canderel, rises some 664 feet (202.2 metres), standing out along a tall building corridor of the city. The tower is located on a challenging site for design and construction, surrounded by roadway setbacks on three sides and a heritage building on the other. Its relatively small lot footprint (38m by 48m) related to its height gives it an 11-to-1 slenderness ratio.

However, water tanks require valuable floor space that would compromise the tower design, especially for the luxury penthouse suites.

This led RJC Engineers to the Kinetica VCD solution, which is ultimately incorporated in place of structural concrete beams which does not impact the architecture of the building, and frees up space for the mechanical systems and sellable space on the top levels of the condo tower. 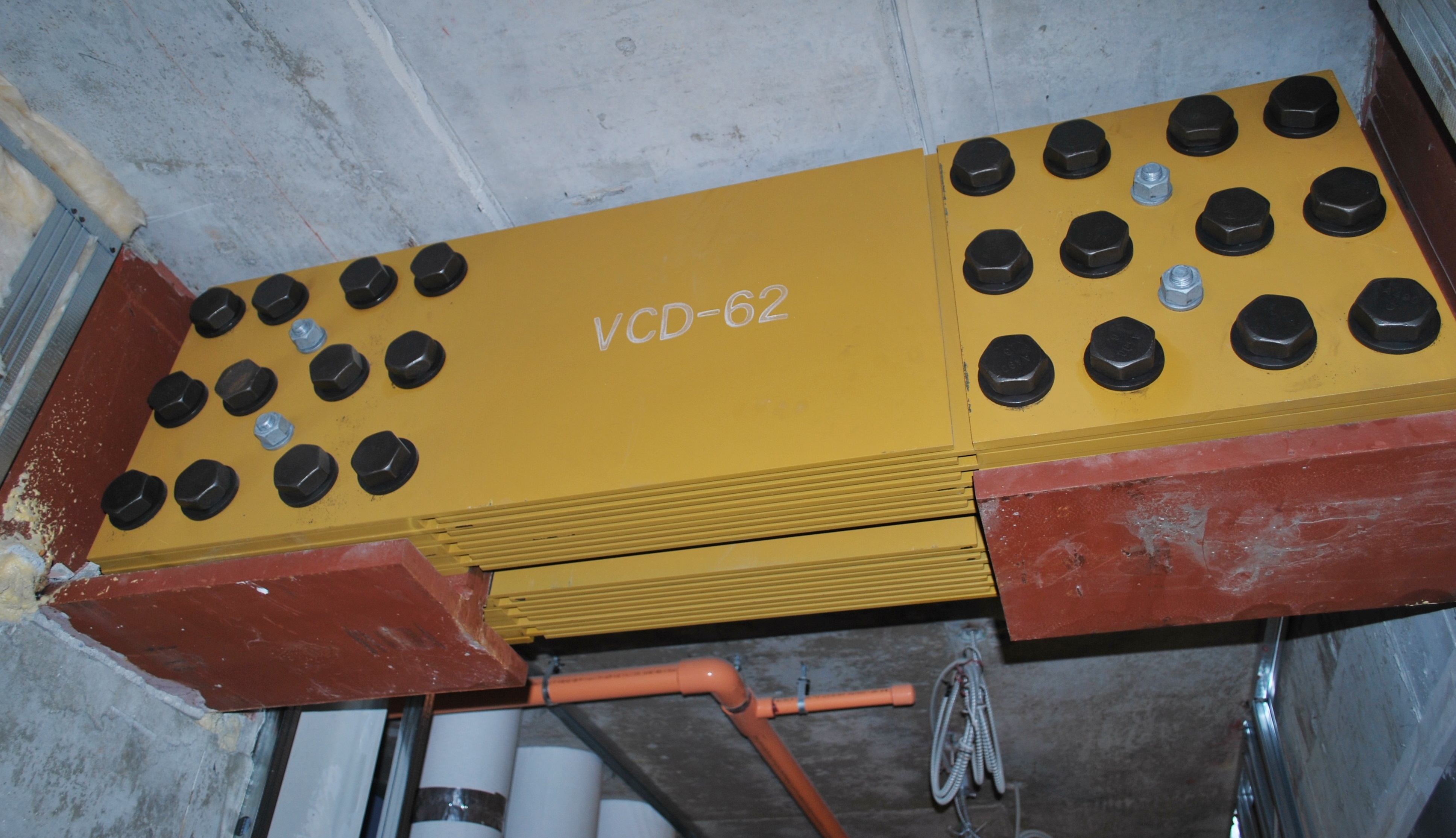 A VCD unit in place.

Early research and development of the innovative Viscoelastic Coupling Damper (VCD) technology dates back to a collaboration between the University of Toronto and structural engineers at Toronto-based Yolles in the early 2000’s. Today the VCD technology rests with Kinetica, a company operating independently and led by Michael Montgomery, P.Eng., who worked on the development of the technology for over 10 years as a PhD student and researcher with U of T professor Constantin Christopoulos, P.Eng., who also advises with Kinetica.
Tibor Kokai, P.Eng., a principal with RJC Engineers (formerly with Yolles) was also around during the early stages of the R&D of the technology, and his familiarity with the system helped foster the YC Condominium involvement.
The VCD system includes layers of a viscoelastic high-damping material developed by 3M that displays viscous and elastic restoring forces, providing efficient coupling to structural members and damping to the structure.

While this damping material has been used in over 300 tall buildings in multiple configurations dating back to 1969, when it is combined with the VCD it results in significanty enhanced damping properties for high-rises.

The actual VCD systems are manufactured by Nippon Steel Engineering Co. and 3M Japan, where the viscoelastic layers are sandwiched between steel plates, which are bolted to steel beams and then ultimately anchored to reinforced concrete on site.

The YC Condominium tower’s structural system consists of a coupled shear-wall lateral load-resisting system, in combination with a small reinforced concrete core. The VCDs are located in the middle third of the tower, replacing the coupling beams that are most heavily loaded. As the building deforms due to lateral loads (caused by wind and/or earthquake) the viscoelastic high-damping material deforms and dissipates the vibrational energy.

The VCDs connect planar shear walls (shear walls along the same grid) over the corridors and are ultimately boxed in drywall, thus they are invisible once the project is complete.

All other coupling beams on floors above and below the VCDs are structural steel for ease of construction, which is also a Toronto first, to provide an optimal balance of stiffness and shear capacity throughout the height which maximizes the damping produced by the VCDs. 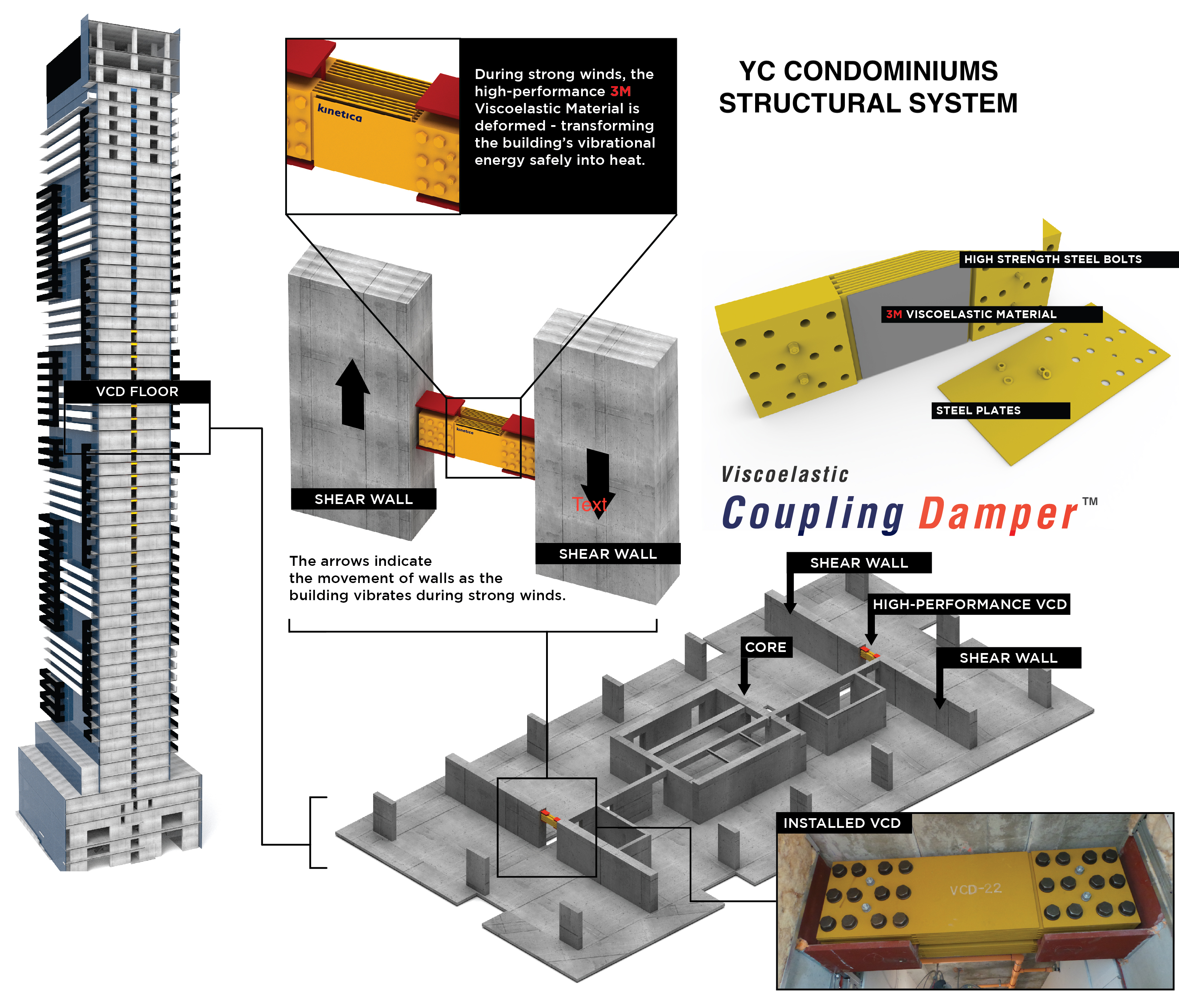 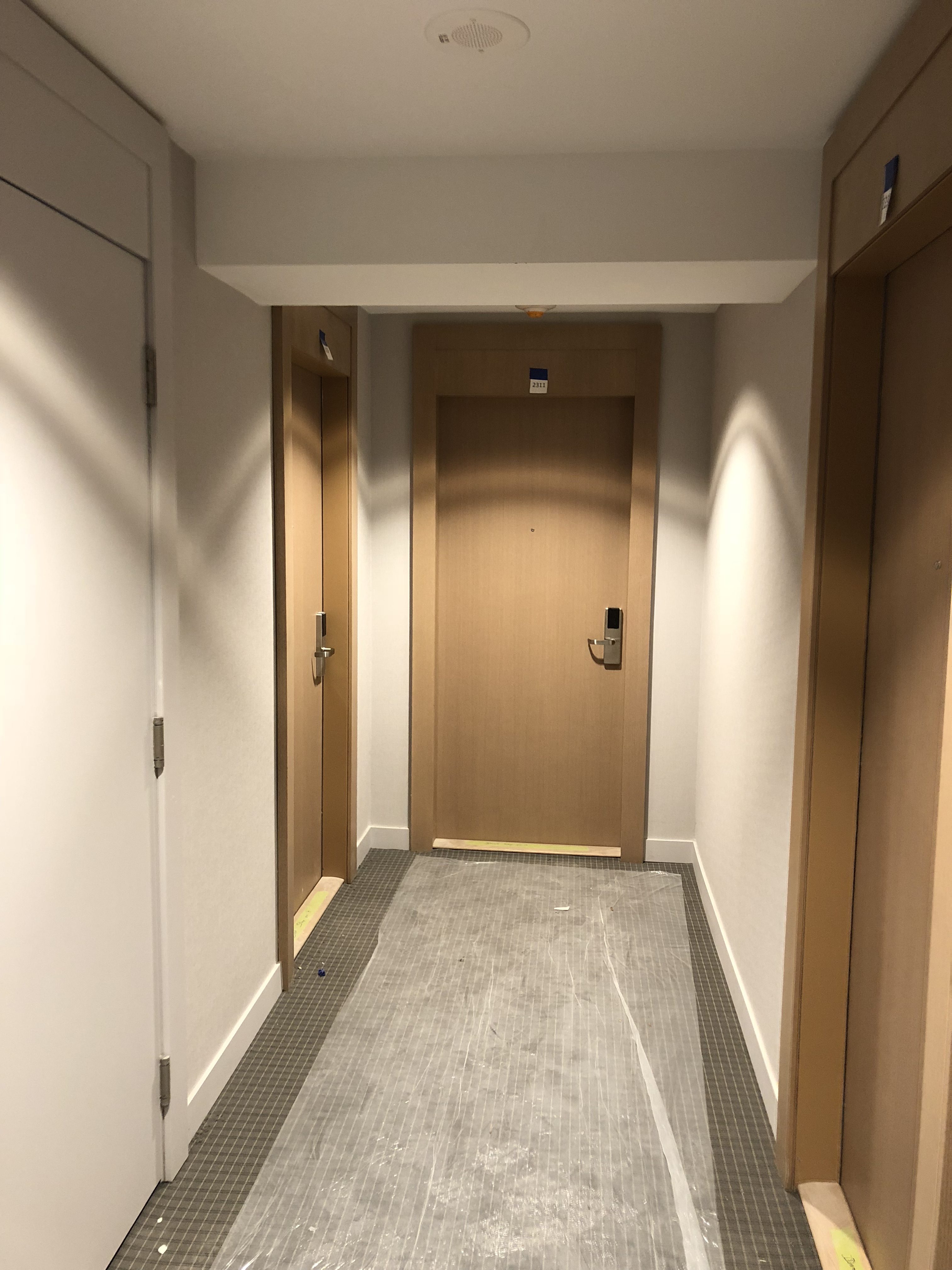 During construction, temporary rigid steel sections were inserted as placeholders during the casting of the reinforced concrete and then removed and replaced with the VCD units.
As mentioned, once the structural framework was compete, the walls and beams were finished with drywall completely concealing the VCDs from view.

Since the dampers are integrated into the shear wall system of the building, they do not impact the architectural design, and the VCD performance does not require any maintenance or tuning over the entire life of the structure.

Ultimately the system helped simplify construction while improving human comfort on all floors of the tower by controlling wind or earthquake-induced vibrations of the building.

The VCD systems provided an innovative and superior space-saving damping solution for one of the latest condo towers erected in Toronto.

The building boom in the city continues, the latest count seeing some 120 active cranes across the city, more than doubling the next nearest locations in North America.

The crane at the YC Condos project may be gone, but this new tower and its innovative damping solution represents a landmark for future structural design in the city and for tall towers worldwide.